Home NEWS #EndImpunity: Three journalists killed in 2022 in the Philippines, ranks 7 in... 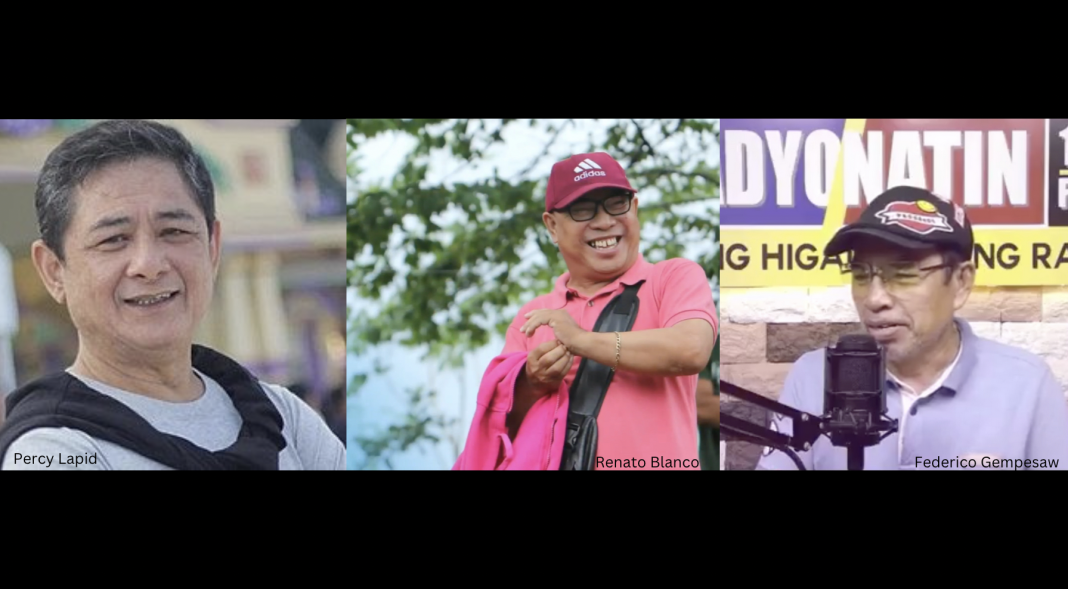 Despite the decades-long call to #EndImpunity, journalists’ killings have become more brazen. Percival Mabasa or known as Percy Lapid of DWBL 1242 Radio was killed on October 3 within the National Capital Region, the center of national media and the political, economic and cultural center of the country. Before this, a lot of journalists’ killings take place in provinces or remote areas which make reporting a reporter’s death not as fast and easy.

Lapid was only 50 meters away from the gated community in Las Piñas where his home is located. A motorcycle with two men riding-in-tandem (the common perpetrators of extrajudicial killings since the presidency of Gloria Macapagal-Arroyo and that had made the term “riding-in-tandem” part of colloquial language just like “tokhang” and “fake news”) approached his vehicle, one gunman fired two shots at Lapid and killed him at once. He was a radio reporter and commentator for various AM radio stations since the 1980s and a columnist for the tabloid Hataw.

The motive behind the killings now appeared too vindictive, the punitive action just for being a messenger seemed too prompt. Killings of journalists usually undergo scrutiny for being “work-related” or not, to be determined as media killing. That Lapid was a known critic of the current (and 4-month-old) Ferdinand Marcos Jr. administration and his predecessor Rodrigo Duterte before his premeditated killing gives no comfort to journalists, human rights defenders, ordinary citizens or the state of democracy in the country. In recent episodes of his hard-hitting radio show Lapid Fire (a play on the term rapid fire), he hit the government’s continued use of red-tagging to vilify whoever it identifies as its critics or enemies. He also tackled corruption cases, including an exposé on the irregularities of the plan of the Sugar Regulatory Administration (SRA) in August 2022 to import 300,000 metric tons of sugar amid a sugar shortage that was revealed as “artificial” and caused by hoarding and manipulation by several traders. Marcos Jr. is the SRA chairman and Department of Agriculture Secretary, but Malacañang denied that he had any hand in the importation plan. The controversy led to the resignation of SRA officials.

The quest for justice for Lapid’s murder seemed to have unraveled in less than a month. A confessed gunman surrendered two weeks after the killing. Netizens were quick to point out how his physical features differ from the gunman on the scene. He pointed to a mastermind who is locked up inside the National Bilibid Prison, only to later say this is still only a contact, and also just a middleman, diminishing hopes that this could be one of very few journalists killings where the mastermind was identified. The middleman inside the prison died a day after the confessed gunman’s surrender. The jail’s initial investigation was that he died of natural causes. A second autopsy by forensic pathologist Raquel Fortun found that he died of suffocation by plastic bag. Last week, the Philippine National Police cleared up that Lapid’s case is not considered “case closed” as the mastermind is still at large. The clarification came after the Southern Police District director said the case is already deemed solved since suspects have been identified and the confessed gunman is under custody. Meanwhile, the Department of Justice said that the mastermind of Lapid’s slay might be identified and cases may be filed this week.

Lapid was the third journalist killed in 2022 and already the second one under Marcos Jr.

Two weeks before Lapid’s killing, Renato Blanco of Power 102.1 DYRY RFM Mabinay was killed on September 18, 2022. Federico Gempesaw of Radyo Natin 106.3 FM CDO was killed on June 29, 2022, a day before Marcos Jr. took his oath of office and also the last day of Rodrigo Duterte as president.

November 2 is the International Day to End Impunity for Crimes Against Journalists. This year’s observance coincides with the 10th year anniversary of the United Nations (UN) Plan of Action on the Safety of Journalists and the Issue of Impunity.

The Committee to Protect Journalists (CPJ) published its Global Impunity Index on November 1, noting that the vast majority of journalists’ murderers go free. The group tallied 2179 journalists and media workers killed, motive confirmed and unconfirmed, from 1992 to 2022 worldwide.

It found that in nearly 80% of the 263 cases of journalists murdered in retaliation for their work globally over the past decade, the perpetrators have faced no punishment.

CPJ’s 2022 Global Impunity Index, which lists countries where the killers of journalists go free, found that Somalia remains the worst offender on the index for the eighth straight year. Syria, South Sudan, Afghanistan, and Iraq round out the top five countries on the index, which covers the period from September 1, 2012, to August 31, 2022.

Countries like Mexico, with 28 unsolved journalist murders in the past 10 years, the Philippines, and Brazil also continue to fall short in prosecuting murderers of journalists as violence against the press soars and national protection mechanisms prove ineffective.

The Philippines is 7th on a list of 11 countries with “the worst track record in solving murders of journalists during the past decade” with 14 unsolved murders. The country has been on this impunity index for 15 years.

“We’ve seen a dramatic rise in the abusive tactics used to silence journalists, from spyware technology to spurious legal charges. On top of these mounting threats, journalists are being murdered in retaliation for their work with near total impunity. This lack of justice empowers perpetrators to continue silencing the press,” said CPJ President Jodie Ginsberg.

UNESCO reported that already this year, over 70 journalists were killed. Nine out of 10 killings go unpunished. UNESCO said that while the global impunity rate for journalists killings remains unacceptably high, it represents an 9 percentage points reduction in the rate of impunity since 2012 when the United Nations launched its Plan of Action on the Safety of Journalists. (Read the report available in multiple languages here.)

The reports highlighted that:

The International Freedom of Expression Exchange or IFEX declared November 23 as the International Day to End Impunity in 2011. The anniversary was chosen to mark the 2009 Ampatuan massacre, also known as the single deadliest attack against journalists in recent history, in which 58 individuals were murdered, including 32 journalists and media workers.

After lobbying from IFEX and various civil rights groups, the UN General Assembly proclaimed November 2 as the ‘International Day to End Impunity for Crimes against Journalists’ in its 70th plenary meeting in 2013. The date of the UN day marked the death of Ghislaine Dupont and Claude Verlon, two French journalists killed while reporting in Mali earlier that year.