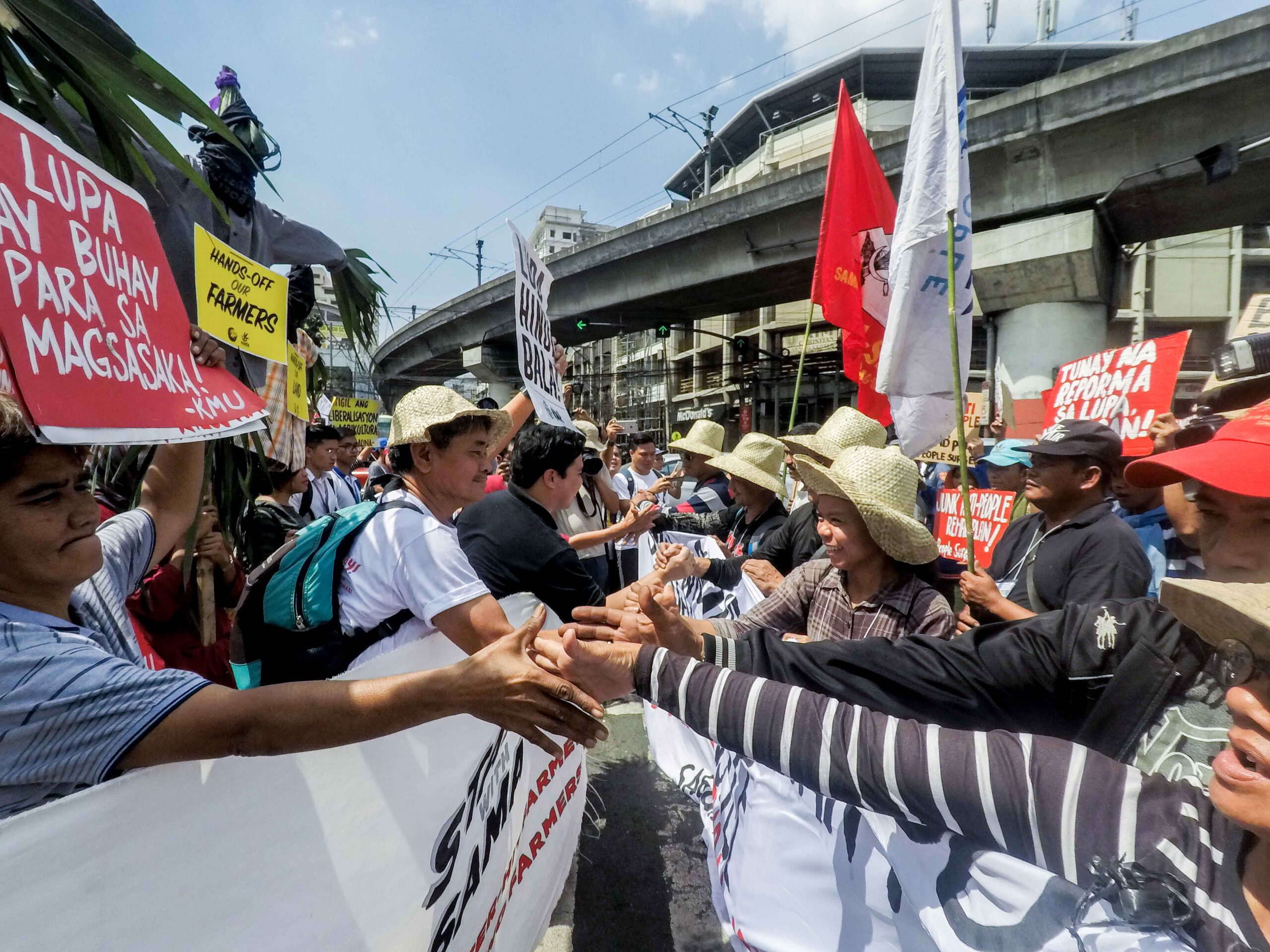 After more than 24 hours of traveling by land, around 50 farmer-delegates to the ‘Caravan for Rights and Justice: Stand with Samar’ arrived in Metro Manila today for a series of engagements with government agencies and protests in key areas of in the region.

The contingents of the ‘lakbayan’ are calamity-stricken farmers affected by succeeding typhoons, infestation of agricultural crops, and intense militarization in Eastern Visayas.

The group will be handing to President Rodrigo Duterte in Malacañang Palace a petition signed by thousands of farmers in Eastern Visayas demanding the President to act on the dismal pacing of the rehabilitation efforts on agriculture in the region and several other agriculture-related demands.

The delegates carried scarecrows embodying the farmers’ resistance against the National Food Authority and Duterte’s rice importation scheme, as if to scare off all anti-people and anti-peasant policies of the current administration.

According to Samahan han Gudti nga Parag-uma – Sinirangan Bisayas (SAGUPA), the government’s agri-neoliberal policies aim at deregulating the agriculture industry and opening it up to the private sector as “crow-like attempts to feed on what little the peasantry has after years of the government neglect.”

“These crows in the government are like pests that take advantage of our ailing crops and livelihood. Now they abandon our sector by importing 250,000 metric tons of rice from neighboring Southeast Asian countries which is sure to render locally produced rice uncompetitive and far too expensive,” said SAGUPA secretary general Jun Berino.

Hunger persists due to infestation and government neglect

Based on data from Kilusang Magbubukid ng Pilipinas (KMP), the bacterial leaf blight (BLB) brown hoppers have been pestering and destroying rice lands in Samar province since 2016. As of last year, the infestation has incurred more than P140-million worth of damaged rice crops.

“When the blight pests attack the rice fields, the leaves of rice plants turn brown and the rice kernels turn to powder. All that is left from the rice plant are husks or ipa. We have not been harvesting rice since last year. This is the reason why we are hungry,” Berino added.

Berino also said that farmers will file a petition at the Presidential Action Center enumerating the official list of agriculture-related demands on behalf of the agriculture sector in EV.

Included among the demands are immediate rice subsidy for Visayas farmers approaching a state of famine after rice production entered into a five-year slump since 2013, alongside the provision of other agricultural inputs and the implementation of free irrigation in the region.

“We would not miss the opportunity to shake the Armed Forces of the Philippines to condemn the humanitarian crisis being instigated by the 8th Infantry Division deployed in our region,” Berino said.

The peasant group will stay until March 8 to hold lobbying, dialogues, and actions at national government agencies.