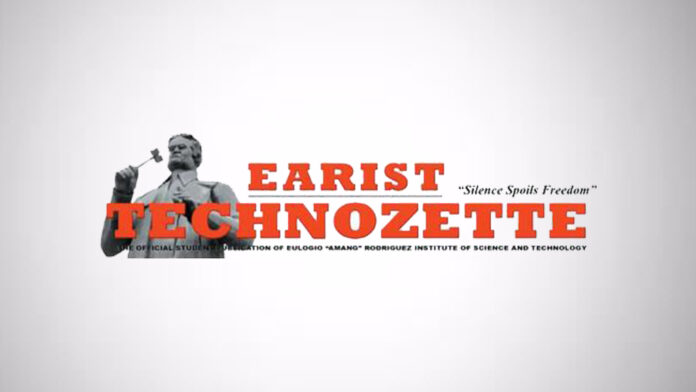 After two meetings between the Eulogio Amang Rodriguez Institute of Science and Technology (EARIST) school admin and the current editor-in-chief (EIC) of student paper Technozette, the latter asserted control of the publication funds collected from the students for the paper’s operations. The school admin insisted to include a faculty member to be one of the signatories of the student publication bank account, but EIC Precious Alyssa Anacta contended that advisers are upon the option of the paper’s staff and can function only for technical guidance, in accordance with the Campus Journalism Act of 1991.

The matter of publication fund control and disbursement was put in question after the EIC for the academic year 2014-2015 Hannah Marie Pelayo withdrew the publication funds amounting to P373,000 without the knowledge of the rest of the editorial board.

The student paper staff was now allowed to disburse partially the student publication funds collected from January to June 2017. They have yet to receive a certification of collection for this period on October 23, but previous publication fund collections that have not been disbursed amount to almost P 1.5 million.

Anacta, however, was concerned with various statements from members of the school admin in the two dialogues that may undermine the student paper.

During the first dialogue, Vice President for Administration and Finance Dr. Myrna V. Gulles said that if the student paper staff do not want to follow the admin, then the paper staff should collect the school paper fee. Publication fees, however, were mandatory and collected as part of the fees collected every semester in efforts to ensure that there would be funds for the student paper.

In the second dialogue, EARIST President Editha V. Pillo confirmed that they are planning to put up their own publication. Anacta said the school admin said they would expect the Technozette to run issues on topics parallel to what their own paper would release.

Anacta said the school admin also denied knowledge of some agreements made during the first dialogue, such as: (1) printing of the paper “shall be settled temporarily thru direct payment after meeting necessary disbursements”, (2) cash advances should be made available upon meeting requirements in the student’ papers staff’s need to attend trainings and seminars and (3) charges would be filed against Pelayo. These were laid out in a resolution drafted by the College Editors Guild of the Philippines (CEGP) whose representatives were present in the first dialogue, but these points were discussed again in the second dialogue. The school admin also said they did not ask the CEGP to draft a resolution.

The dialogues were held on September 14 and October 12 with the school administrators present, including the school president in the second meeting, the Technozette EIC and a representative of the CEGP.

The EARIST Technozette has not released an issue in almost four semesters. They used to come out with three issues every semester.