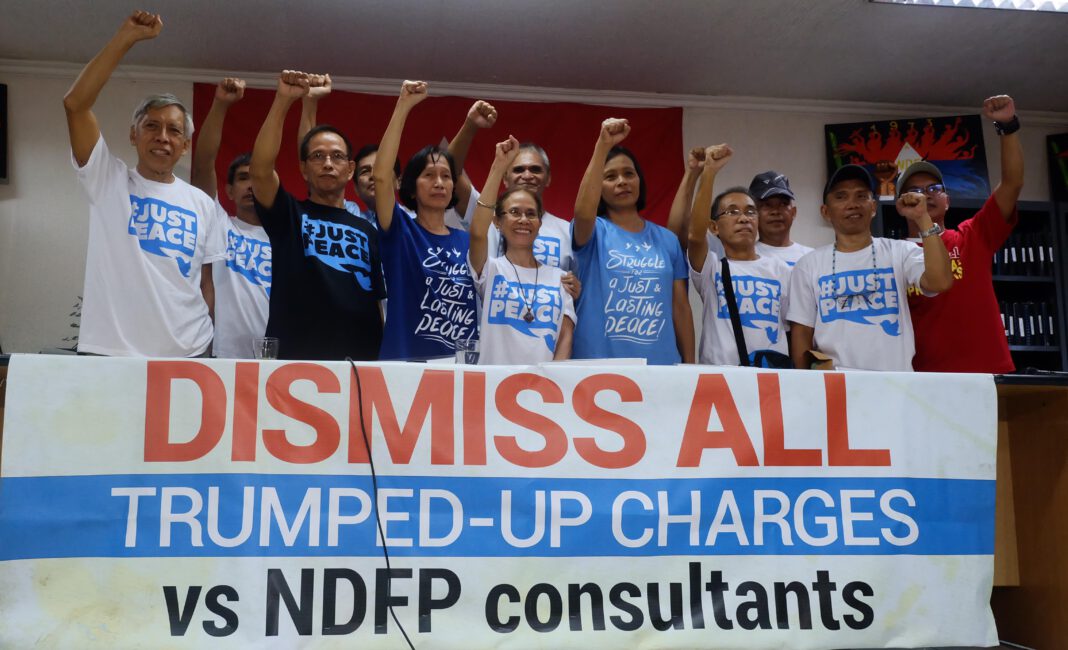 National Democratic Front of the Philippines (NDFP) peace counsel as well as human rights group Karapatan were quick to point out that President Rodrigo Duterte’s verbal rearrest order on February 5 were violations of peace talks agreements JASIG and CARHRIHL, and of the Government of the Philippine (GRP) own Supreme Court jurisprudence Hernandez doctrine and of due process.

The Philippine National Police (PNP) immediately acted on this pronouncement of Duterte and announced on February 6 the 13 NDFP consultants they plan to rearrest.

“The police cannot automatically enforce arrests without due process from the courts. The order for their arrests is baseless and malicious,” responded Cristina Palabay, Secretary General of Karapatan.

Atty. Edre Olalia responded to this saying the public must be alarmed at the consequences of the PNP Chief’s logic of rearresting using old warrants.

“To follow their logic, then all previously arrested persons who are released for any reason – bail, acquittal, served sentence, pardon etc. – can still be arrested later because old arrest warrants have not been ‘quashed’,” said Olalia.

But the Department of Justice (DOJ) looked to immediately amend that legal loophole.

The DOJ, on February 7, now issued a look out bulletin for the Bureau of Immigration for NDFP consultants released on bail, as well as instructed the National Prosecution Office to “found probable cause to criminally charge respondents in court, to immediately file the case and obtain warrants for their arrest.”

On such order, National Union of People’s Lawyers (NUPL) and Karapatan have called out the succeeding GRP past administrations in its violation of the Hernandez doctrine. Said Supreme Court jurisprudence goes against the “criminalization of political offenses” where government dissenters, whether ordinary citizens and activists or combatant, have been charged with trumped-up non-bailable criminal cases rather than political offenses. The Duterte administration is seen repeating the deeds of past presidents in this regard.

Olalia also said that for NDFP political consultants already out on bail, “they have to be committing a crime, have just committed a crime, or about to commit a crime in the presence of an arresting officer, which is not the case,” before an arrest without warrant can be valid.

“And for new warrants of arrests to be issued, that assumes that after they were released for the August 2016 Oslo talks till they came back from the January 2017 Rome talks, they committed new crimes which were not covered prior to August,” said Olalia.

He said this would be unbelievable.

“All supposed crimes allegedly committed before August are already covered by warrants which have all been served and extinguished by their being detained earlier. So if the cases were already in existence before, why file them only now?” Olalia added and said he was astonished by these turn of events.

The charging of criminal cases against legal activists and NDFP consultants have been used by government to restrict the mobility of government dissidents, as the trumped-up charges against political prisoners have taken an average three to five years to get dismissed by the courts in the experience of the NUPL and Karapatan.

Palabay in a Facebook post scored government’s use of power for its own ends and not the ends of justice.

“Weeks, months, years will have to be counted [for justice to be served the wrongly detained]. The orders to rearrest the NDFP consultants, in blatant violation of the JASIG, and the spectacular speed of government authorities to implement them are proof on how this system and the law can work for those in power,” Palabay posted.

She contrasted this with the GRP’s failure to deliver its release of political prisoners promise in the peace talks and compliance with peace talks agreements JASIG and CARHRIHL and the GRP’s own laws and due process.

“(For the release of political prisoners from trumped-up charges, [GRP] said ‘judicial process’ had to be observed. For a non-lawyer and a witness to the difficult circumstances that political prisoners surmounted in their cases, as well as victims of state-sponsored violations, this only proved to me that the military, police and executive department are to decide if a victim will be given justice or not, and more often or all the time in this kind of system, justice is not served)” posted Palabay.

Through the work of defense lawyers, 32 political prisoners walked out of jail last year after their cases were dismissed, proving they were made up after all.

NUPL and Karapatan also noted that the filing of criminal charges against critics of government also ultimately violates basic human rights of freedom of beliefs, expression, assembly and association.