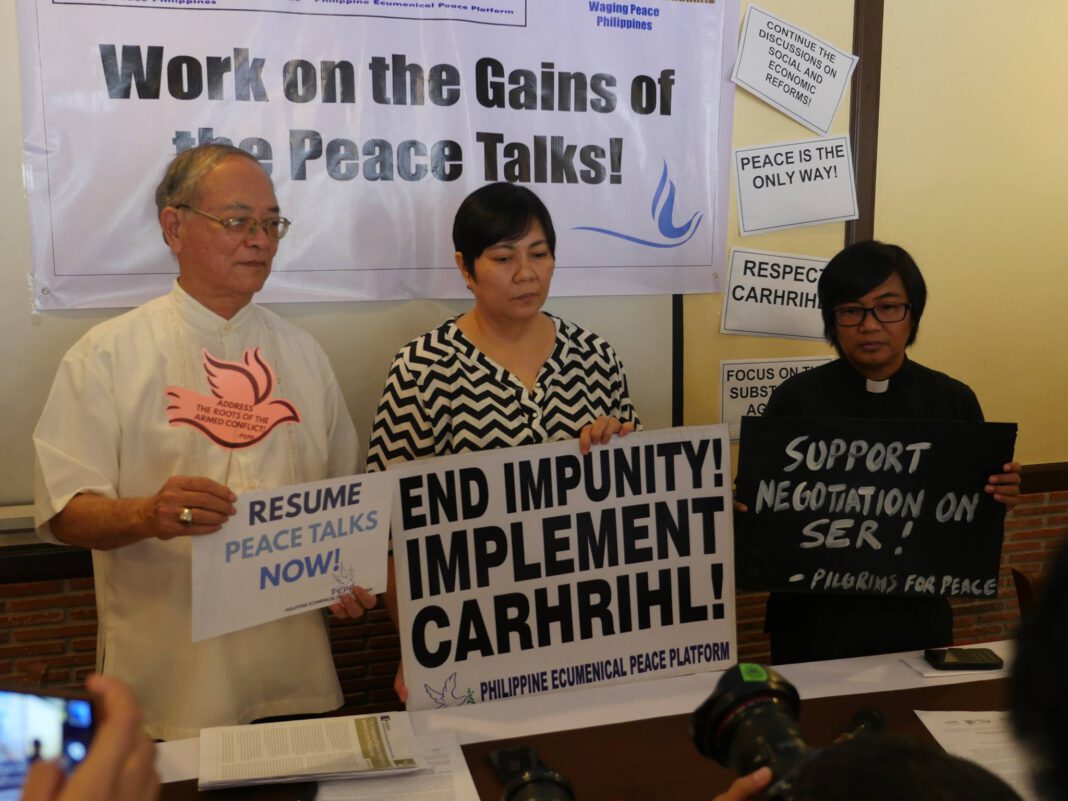 “Karapatan strongly urges President Rodrigo R. Duterte to rethink his statement on the termination of peace talks between the Government of the Republic of the Philippines (GRP) and the National Democratic Front of the Philippines (NDFP)” opened the human rights group in a February 6 statement.

The group believed that the Duterte’s backing out from peace talks will bring more suffering to the people and pointed out the Philippine military as perpetrators of human rights violations during the time of ceasefire and active phase of peace negotiations from June 2016 to January 2017.

“Pres. Duterte should see that one big roadblock is the Armed Forces of the Philippines (AFP) being warmongers and peace saboteurs, within and outside the peace process,” continued the statement.

Karapatan cited political killings, enforced disappearances, illegal arrests and detention, threats and harassment of village residents were perpetrated by the AFP without let-up, exposing the GRP’s unilateral ceasefire “as a sham.”

Karapatan tallied 10 extrajudicial killings, 2 enforced disappearances and 25 illegal arrests and detention and thousands affected in cases of AFP encampment of schools, medical, religious and public places, and cases of threats against civilians due to indiscriminate firing, bombing, artillery fire, landmines, etc. The group submitted their report of GRP political and civil rights violations from August 21 to December 26, 2016 during the peace talks.

The group also pointed out that the AFP is standing in the way of the release of political prisoners, as Duterte himself admitted.

Until recently, Duterte committed to release the political prisoners in compliance with peace talks agreements.

“Ultimately, it is the people who will suffer from the absence of GRP-NDFP official peace talks. History has shown that militarist measures such as counter-insurgency programs never led to the solution of armed rebellion in the country. They instead lead to human and people’s rights violations against the masses in rural and urban communities,” said Karapatan.

Deal with issues on the formal peace table

The Philippine Ecumenical Peace Platform (PEPP) on February 8 called on both the GRP and the NDFP “to resume the formal peace talks in order to address the roots of the armed conflict despite recent developments that threaten to scuttle it for good.”

The PEPP took note of recent developments that, in just over the weekend, threatened the work for peace.

“Negotiations should not be bogged down by accusations and counter-accusations. Outstanding issues should be threshed out in principled dialogue over the negotiating table where great strides towards peace have been made in the last three formal rounds of talks between the two parties facilitated by the Royal Norwegian Government,” said the statement.

The PEPP said that the parties should make use of the Supplemental Guidelines to the Joint Monitoring Committee under the Comprehensive Agreement on Respect for Human Rights and International Humanitarian Law (CARHRIHL) to address the accusations of both parties that have led to the present breakdown. The Supplemental Guidelines was signed within the third round of peace talks from January 19 to 25.

“The PEPP has always maintained that all signed agreements that were painstakingly negotiated by both parties are signs of hope and should be honored to serve as building blocks for a better future. This recent crisis in the peace talks shows how fragile the peace negotiations are and the people’s vigilance is needed to see to it that the parties involved stay on course,” said the statement.