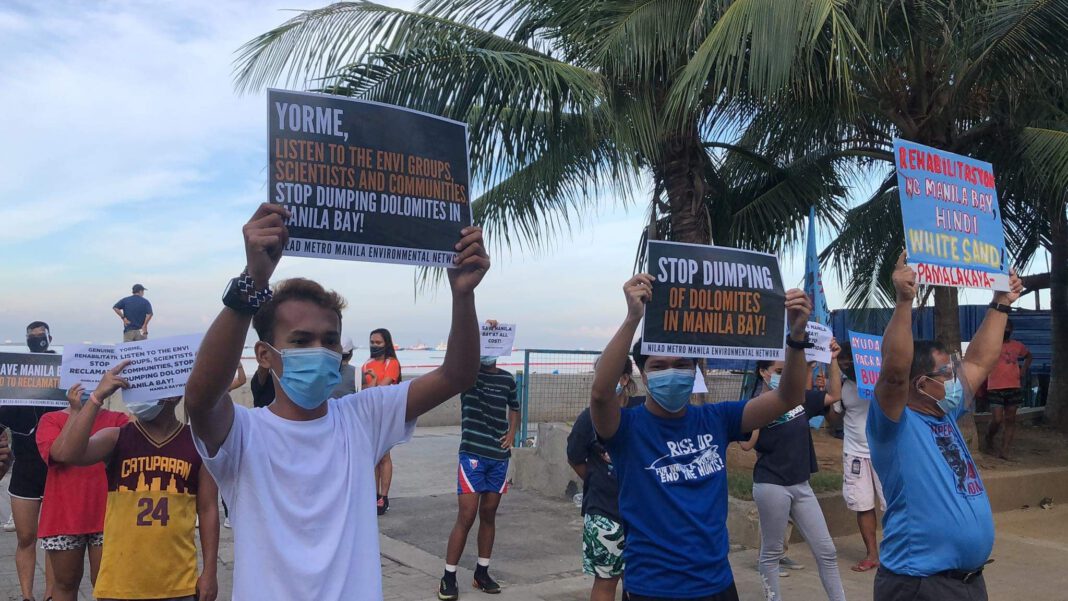 “Stop the project and use the funds to organize clean-up activities in Manila Bay. Conduct stakeholder consultations about a comprehensive plan to rehabilitate Manila Bay,” Nilad Metro Manila Environmental Network told the Department of Environment and Natural Resources (DENR).

Manila residents also joined the protest urging local authorities to focus on clean up drives and other rehabilitation efforts instead of ‘beautifying’ Manila Bay at a time when we are struggling with a pandemic.

“Listen to environmentalists and scientists instead of believing the ‘science’ of Antiporda. Listen to the petition of Manila residents who are concerned about the long term impact of the dolomite dumping in the city,” added Nilad.

Nilad will organize a ‘Dampa Alert’ from September 12 to 19 to monitor the coastal areas of Manila Bay in Metro Manila. It will mobilize community volunteers to check up the water condition and garbage pollution in the coastlines of the region.

Nilad has been organizing coastal cleanups in Manila Bay and mangrove reserves in Metro Manila, while also objecting to plans for Manila Bay reclamation.

The group cited a research on the projects on Manila Bay reclamation involved at least 26,230 hectares of Manila Bay was approved by the each local government unit concerned, Philippine Reclamation Authority (PRA) and DENR under President Rodrigo Duterte’s ‘Build, Build, Build’ Program (BBB).

“If the reclamation will push through, almost 500 thousand families from coastal communities and fisher folks will be demolished and displaced,” said the group.

They said that the reclamation projects will also destroy the rich and historical marine biodiversity of the bay.