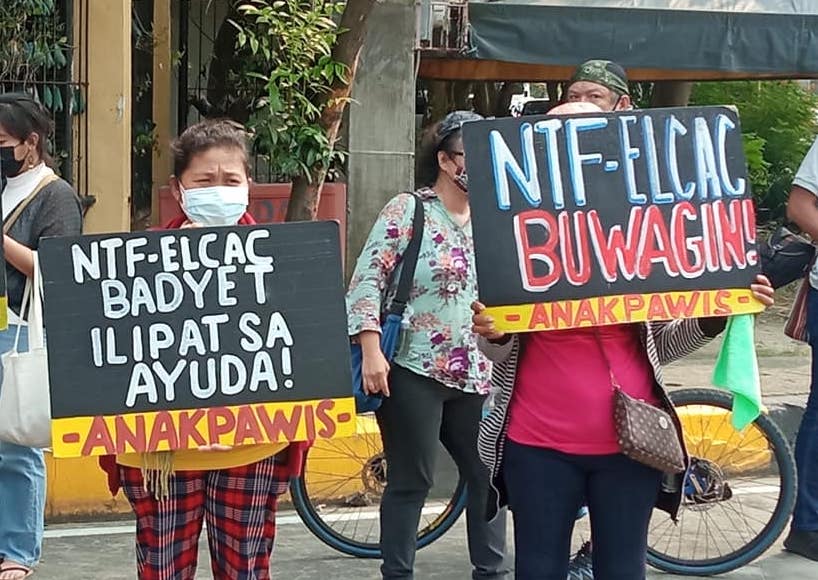 According to Chairman of Senate finance committee Sonny Angara, the P10 billion in the budget will be allocated for the NTF-ELCAC’s Barangay Development Program.

On November 9, the senate finance committee defunded the taskforce by P24 billion pesos in order to accommodate the COVID-19 benefits and allowances of healthcare workers.

Rights group Karapatan and women’s alliance group Gabriela welcomed the budget cut decision last month while calling for the abolishment of the task force, on the basis of the current public health crisis, the plight of healthcare workers, and especially the task force’s string of human rights violations, including the red-tagging issues that repeatedly put them in a hot seat among Congress.

Another reason for their defunding was their late submission of the report on how they utilized their P19 billion budget for 2021. In the submitted report, among NTF-ELCAC’s 2,318 projects, only 26 were implemented, showing the body’s low and slow implementation rates of their programs.

Prior to this, lawmakers have repeatedly demanded to probe the task force for the possible misuse of their P19 billion funding.

Angara disclosed the increased P10-billion budget after Senator Ronald “Bato” Dela Rosa, sponsor of the NTF-ELCAC budget, appealed to retain the task force’s budget to P19 billion, similar to their funds this year.

Bato continued to oppose the task force’s budget cut, and asked for consideration on the part of his colleagues, citing the “decades-long insurgency” problem in the country.

Angara likewise explained that the NTF-ELCAC’s funds might still be increased during the bicameral conference committee, wherein the two chambers of Congress, Senate and House of Representatives, will work out the disagreeing provisions of their respective versions on the proposed 2022 national budget.

In a GMA News article, Angara stated that in order to increase the task force’s funds, it will be necessary to source out funds from other departments and subject them to budget cuts, which he said will be difficult.

In an interview with Manila Today, Zarate noted that “with new [COVID-19] variants like Omicron wreaking havoc worldwide, free mass testing would still be the key in fighting and containing this modern health scourge.”

In relation to the recently discovered Omicron variant, he said that free mass testing “should go hand-in-hand with fast and serious contact tracing to effectively contain this new variant,” and that the government should fund these and not only focus on funding the vaccinations. He added that their funding can be sourced out from the NTF-ELCAC budget.

“Also with vaccine companies saying that the present vaccines may not be enough against the Omicron variant and it may take months to develop a new shot, “it is imperative therefore to immediately detect this strain before it spreads,” said Rep. Zarate.

As the representative for the Makabayan bloc, Zarate strongly urged for the government to likewise realign the budget of NTF-ELCAC to “increase the funding and level up the capacity” of the already underfunded Philippine Genome Center, which in recent news, will be retracing the Omicron variant in the country through old COVID-19 positive samples.

The progressive lawmaker added that the new variant must be approached by the government with scientific methods instead of draconian methods.

Filipino Nurses United calls for the abolishment of NTF-ELCAC, condemns red and terrorist-tagging

Aside from other progressive groups, the side of healthcare workers through Filipino Nurses United President Maristela Abenojar likewise called not just for the complete defunding of NTF-ELCAC, but also for its abolition.

In an interview, Abenojor emphasized the already underfunded COVID-19 benefits of healthcare workers, saying that the absolute abolishment of the controversial task force may give way for the funding of public hospitals that are facing budget cuts amid the public health crisis.

She also said that the task force must be abolished on the grounds of their red-tagging issues, and attacks against those who express dissent, which she called violations of human rights.

[I agree that NTF-ELCAC should be abolished because it serves no purpose. What is it for? The NTF-ELCAC’s main role is to investigate who is against the government, who does not agree with the government’s programs, then they will cast doubt on these people and label them as terrorists, which is an injustice against those wrongfully tagged.]

Despite its “whole-of-nation” approach in addressing the root causes of communist insurgency, she said that there was “no sense for the creation of NTF-ELCAC” because of their spree of red and terrorist-tagging activities which endangers people’s lives. Abenojar added that the government must instead listen to criticism and dissent, as well as review their own policies.

[What is needed is to strengthen basic social services like health, education, housing and livelihood of the people.]