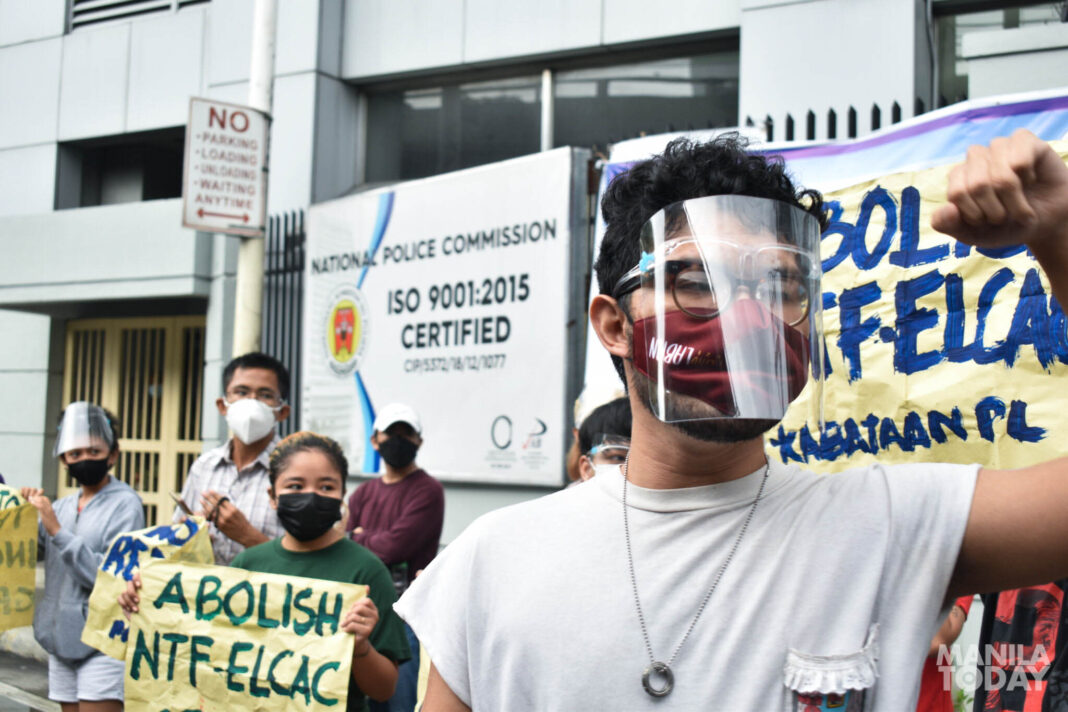 In order to provide funds for the COVID-19 benefits and allowances of Filipino healthcare workers (HCWs), senators on November defunded the controversial National Task Force to End Local Communist Armed Conflict (NTF-ELCAC) by P24 billion, leaving the task force with only P4 billion funding for next year.

This is in stark contrast to the original proposal of P28 billion budget by the executive department and the P19 billion budget allocated to the task force in 2020, which the senators opposed and viewed as “too big.”

Some senators even pushed to completely defund the NTF-ELCAC, the body that is the president’s creation through Executive Order No. 70 and which he also heads, according to chairman of senate finance committee Senator Sonny Angara.

This push among the senators to defund the anti-communist taskforce stemmed from the flak that the latter received during their spree of red-tagging controversies since its establishment.

Due to this, both the senate and the House of Representatives  sought to probe the task force’s utilization of funds, with the house saying that the red-tagging issues were “simply too wicked to be ignored.”

Senator Sonny Angara announced that P51 billion will go to the special risk allowances (SRA) of healthcare workers, and P11 billion programmed funds will be allotted for their compensation.

To sum up, the health sector will have the third highest funding under the senate’s version of the 2022 national budget, next to education and infrastructure.

Rights group Karapatan welcomed the solon’s decision, stating that HCWs are more deserving of the people’s taxes more than the controversial task force, given the widespread calls against them, complaints of red-tagging, and the ongoing public health crisis in the country.

“With the widespread public clamor against the NTF-ELCAC, and amid this public health crisis, it is clearly our struggling health workers who deserve the people’s taxes over the NTF-ELCAC’s devilish cabal of liars, red-taggers, war criminals, and human rights violators. Funneling billions of pesos to State violence and repression while millions of Filipinos are suffering is simply shameless,” Karapatan said in their statement.

The rights group further pushed to completely abolish the task force and reallocate the remaining P4 billion, which they emphasized as still being a huge sum, to address the people’s needs, specifically the ayuda.

“The defunding of the NTF-ELCAC is an urgent and welcome step, but if we are to consider the reasons why it should be defunded, then we also assert and strongly call for the abolition of the NTF-ELCAC completely,” they said.

GABRIELA, a national alliance of Filipino women’s organizations, likewise welcomed the budget cut. Similar to Karapatan, they too firmly stand on the complete abolition of the NTF-ELCAC.

“Government should rechannel budget for state terrorism to 10k economic aid for families affected by the worsening crisis in the country.  #AbolishNTFELCAC,” GABRIELA stated in their Facebook page.

Research and advocacy group IBON Foundation reported that despite the recent 7.1% GDP growth of the Philippine economy, rates of unemployment have increased on the other hand, by about 4.3 million in September. This has been the highest reported rate of unemployment since July last year.

President of Filipino Nurses United Maristela Abenojar, RN welcomed the budget for HCWs and slashing of NTF-ELCAC funds, suggesting that more funds should be re-channeled for the benefit of public health, especially those from programs that should not yet be prioritized over public health amid current pandemic crisis.

[Apart from what we will be rechanneled from NTF-ELCAC, sourcing of additional funds from other projects or programs that are not priorities at this time of COVID-19 pandemic is also needed. For example, the Build, Build, Build projects for infrastructure, are they the priority at this time or the health of the people?]

Menawhile, she called the increased budget for the Department of Health “misleading”. Having the third highest funding for the 2022 national budget is not as astonishing to hear for Abenojar as she explained that this will still depend on how the funds will be allocated and on which agencies will benefit the most.

Before the announcement of the senate’s version of the 2022 budget bill, the initial proposal for the Department of Health’s funding was P242 billion. This was then raised to P312.3 billion to provide more budget for COVID-19 recovery.

However, even with the increased funding, including the P24 billion rechanneled funds from the NTF-ELCAC would not suffice to fully compensate the long-overdue allowances and hazard pays of all 1.7 million healthcare workers, said Abenojar.

[The benefits of healthcare workers are not only SRA, aside from SRA there is the Active Hazard Duty Pay, there is also the meals, accommodation, and transportation allowance, there is also life insurance. And the total health workers we have in both public and private institutions number to 1.7 million. So if you multiply those benefits to 1.7 million, a big amount is need to cover the benefits of health workers alone.]

Citing the initial budget proposal, Abenojar stated that in the earlier P242 billion proposed budget for DOH, about P80 billion will be used to fund the Philippine Health Insurance Corp. (PhilHealth). This is in spite of corruption and financial mismanagement findings within the insurance agency, which she said is a concern given their questionable integrity.

[We don’t think that allocation is right, and the budget should instead be given directly to public hospitals and public primary healthcare facilities. This is to ensure that government hospitals will have enough budget for medicine, equipment, supplies and other needs for the enhancement of their facilities.]

Abenojar also emphasized that due to the bulk allocation to PhilHealth, funding for public hospitals will remain inadequate, as is the compensation and allowances of health workers which was even non-existent in the initial budget proposal.

The Alliance of Health Workers said that the DOH budget should be 10 per cent of the country’s Gross Domestic Product (GDP, mainly due to the ongoing health crisis and lack of compensation for healthcare workers.

Abenojar agreed with this notion, explaining that in a normal situation, the World Health Organization advises each country to allocate five percent of their GDPs for their health sector.

[This is in a normal situation. But right now that there is a pandemic with a lot of expenses, this needs to be doubled. This is not an ordinary illness; we also have to look out for preventive measures so that Covid cases will no longer spread or increase. We need to promptly give medicine and compensation for those who contract Covid. It is only right to allocate 10% of the GDP for health.]

Plight of health workers and call for Duque’s resignation

Apart from the calls to increase the DOH budget, Abenojar also described the ongoing exploitation of the overworked and underpaid health workers in this pandemic, concluding it to a call for the resignation of Health Secretary Francisco Duque III.

Narrating their lack of allowances, late Covid-19 compensations, and the non-regularization of contractual workers, she emphasized how the leadership of the health sector, and the failures of the pandemic response, contributed to the current plight of healthcare workers in the Philippines.

[The important role they contribute during this pandemic is being ignored. They are called frontliners, heroes, but only in paper. In applause. But not in essence. And we know the manifestation of that is a lot of them resigned from their jobs. Many left for jobs abroad. Because they think that if they don’t resign, if they don’t leave, their families will die.]

She also said that those who failed to show genuine concern for the plight of health workers and the masses during the past six years should no longer be voted for in the coming 2022 elections.

[Secretary Duque should resign. He should be replaced with someone more credible to lead in the country. One with integrity, one who is honest and have enough capabilities to lead and run a health department. What happened to us was a serious matter. But actions were slow.]

She said that we would not have had repeated total lockdown and repeated surges of COVID-19 cases if the DOH under the leadership of Duque as able to act and respond quickly.