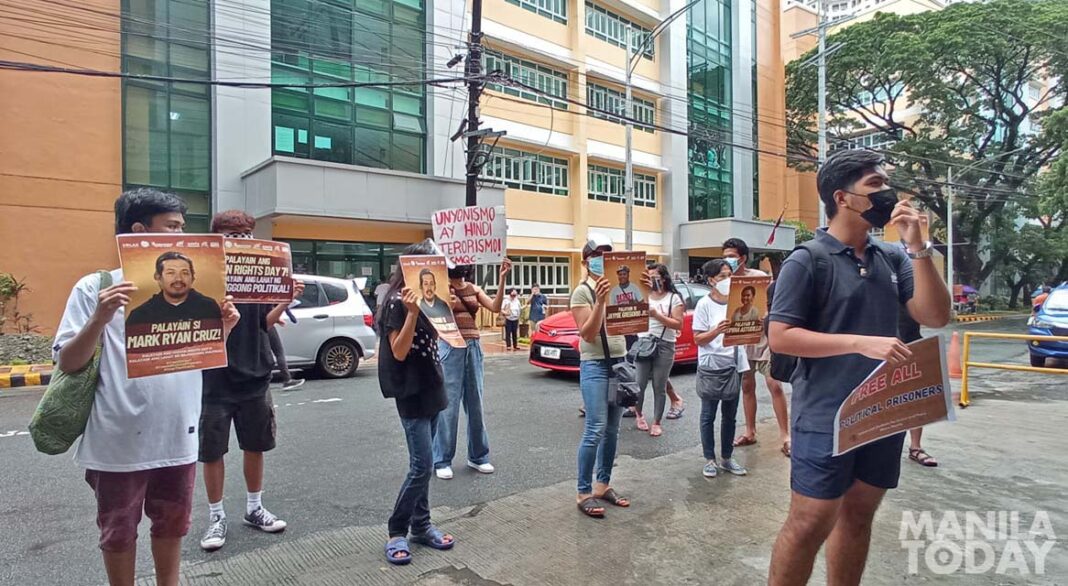 Rain or shine. Groups and families of Mark Ryan Cruz, Romina Astudillo, and Jaymie Gregorio Jr, three of the Human Rights Day 7 (HRD7), protested at the Quezon City (QC) Hall of Justice on the day of the online hearing of the three on July 9.

This is the day before their seventh month in detention, after the December 10, 2020 midnight police raid in their home in Quezon City on the strength of a search warrant by QC Executive Judge Cecilyn Burgos-Villavert. The controversial judge also issued search warrants to the rest of the HRD7 in three other locations, via a police narrative that the seven were linked in a ‘gun-running syndicate.’

[Cecilyn Villavert, if you are there, have a conscience. You are a mother too. You have deprived many sons and daughters of a chance to be with their parents.]

The protesters pushed for the immediate release of five from the HRD7 who remain in prison.

Cruz and Gregorio are currently detained at the MMDJ Annex 2, also in Bicutan. Astudillo is detained at the Quezon City Female Dormitory inside Camp Karingal. In the hearing, the families found out that their motion to transfer to a different detention facility was denied.

[You have destroyed many families. You have put many workers behind bars. You have killed many farmers through your questionable and baseless warrants.

Cruz and Durana’s 11-year son MJ Cruz wrote a letter to Judge Kathleen Dela Cruz-Espinosa of QC RTC Branch 91 on May 27 to attest that his father is innocent.

The same judge denied the motion to quash search warrants filed by Cruz, Astudillo, and Gregorio last May 2.