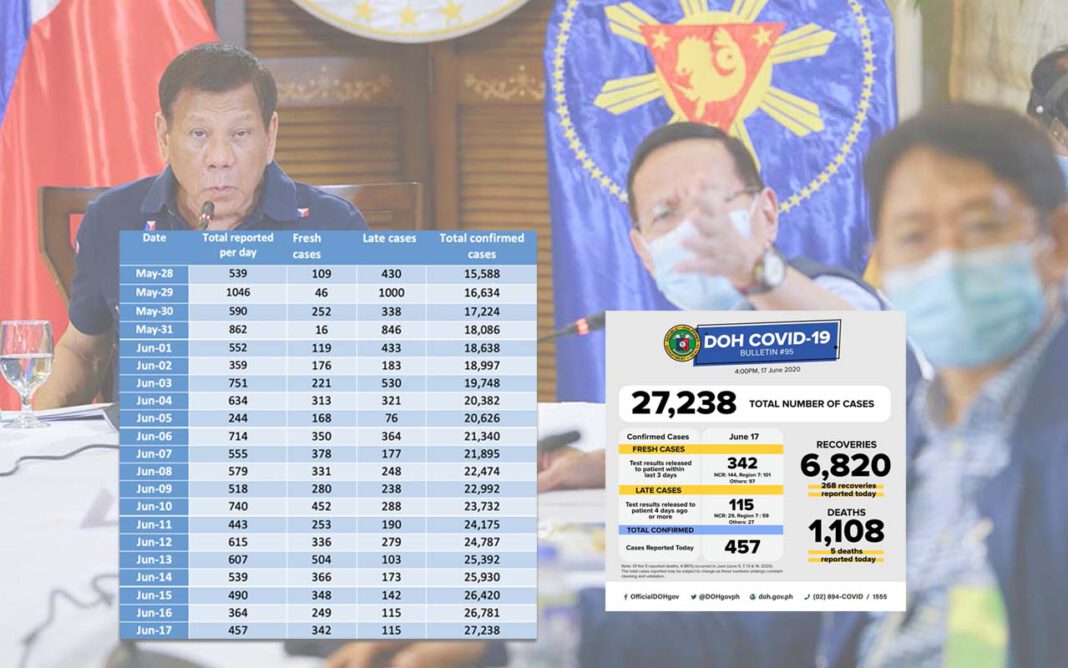 The daily average of COVID-19 cases the Department of Health (DOH) reported this month of June is at 529, where the average of fresh cases is at 305 and late cases at 234.

The distinction between fresh and late cases was made by the Health Agency days before the end of May, also the end of 77 days of lockdown, due to the testing backlogs or test results not released to patient after three days.

Fresh cases have overtaken the late cases since June 7. The Health Agency once said the total reported per day have been pulled up because of late cases. The DOH also reported the highest number of deaths in a day since May 12 on June 7. 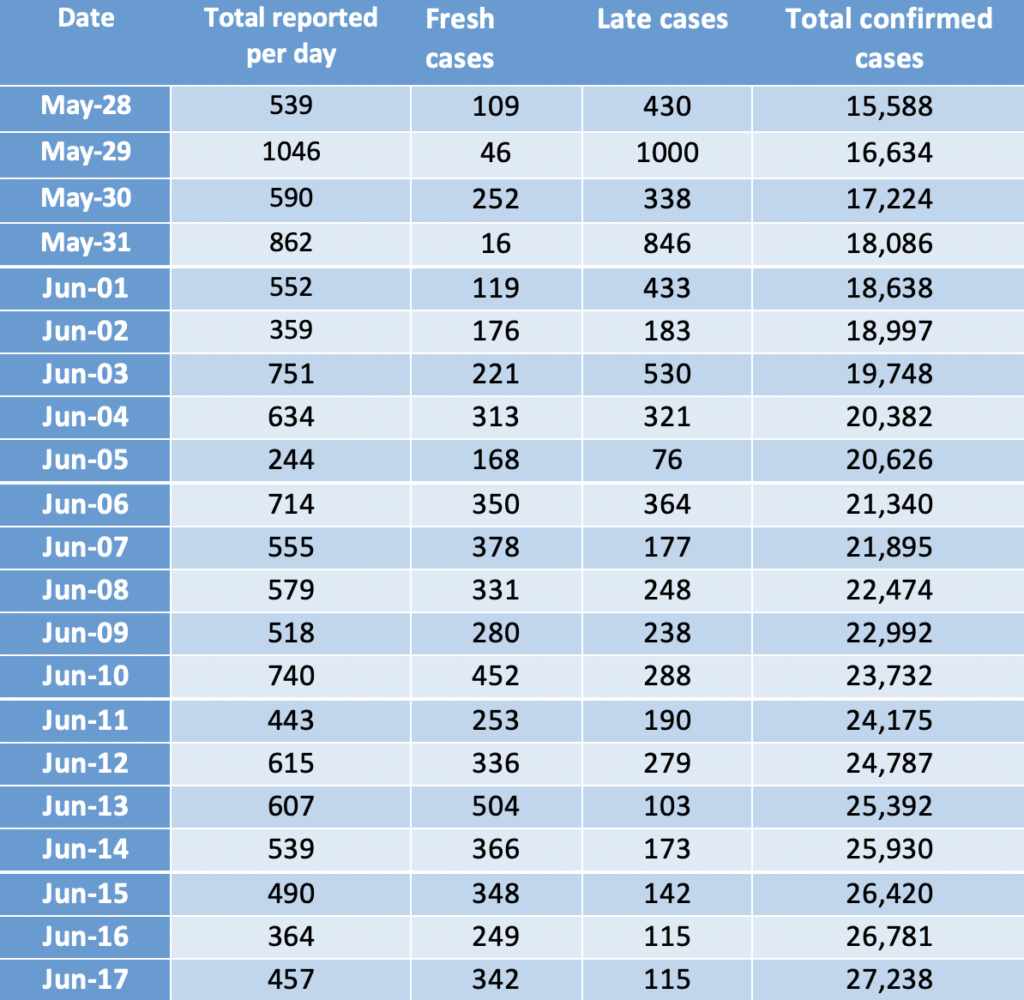 Cumulative positive cases were at 33,091 on June 16, while the DOH reported confirmed cases at 27,238 by June 17–the difference is the validation backlog. The new interface of the DOH COVID-19 tracker does not show the confirmed cases any longer. Total cases reported on June 17 is 457, with fresh cases almost three times more than late cases.

“Today is June 17 but data is April 20. We are the only country fresh and late cases. In a crisis, we should demand accountability and not tolerate mediocrity,” Leachon said.

Leachon said it was difficult to advise the government on the quarantine protocols due to the two-months delayed data, citing Cebu as example after the province was returned to enhanced community quarantine or total lockdown but the rise in cases reported was as old as two months.

[If your data is not correct, many would die because of this.]

Leachon said he was forced to resign his post after Presidential Spokesperson Harry Roque and DOH Secretary Francisco Duque III asked NTF Chief Implementer Carlito Galvez, Jr to let him go after they were displeased with his viral online rant, where he publicly revealed and railed against the gaps in the government’s response measures and in DOH reported data.

Following Leachon’s rant, the DOH released a statement on “concerns regarding data management and reporting.”

“The DOH has also clarified previously that the daily bulletin shows the cases and deaths reported, not when the patient began having symptoms and/or when the patient actually died. Since this is the method that has been in place since January, it is deemed fair and appropriate to continue this method of reporting,” said the Health agency.

In reaction to Leachon’s online rant, some netizens pointed out how the World Health Organization presented the COVID-19 cases in the country as simply as such:

Updates from @DOHgovph this 17 June:

There are 457 people newly confirmed with #COVID19PH, of which 342 are fresh cases and 115 are late cases as defined by DOH. The total confirmed cases have now breached the 27,000-case mark with 27,238. pic.twitter.com/yFrlYqOUe7

Galvez released a statement on the termination of Leachon.

Statement of the Chief Implementer National Task Force on COVID-19 Carlito G. Galvez Jr. on the Termination of Services of Dr. Anthony Leachon as Special Consultant to the Task Force pic.twitter.com/j60sU3PFAa

Office of the Ombudsman investigation on DOH

The Office of the Ombudsman announced yesterday they have decided to investigate the DOH, Duque and other Health officials.

They will investigate the confusing and delayed reporting of COVID-19 related deaths and confirmed cases, delayed and alleged overpriced procurement of personal protective equipment, testing kits and testing equipment, alleged lapses that led to the death of medical workers, rising number of deaths and infected medical frontliners, and delayed release of benefits to health workers who died and got ill with COVID-19.

DOH said in a statement that they welcome the investigation and will comply with all directives from the Office of Ombudsman. They also responded that they have been transparent in their COVID-19 response, regularly maintained a COVID-19 tracker and has issued the checks to 32 health workers who died and 19 who became severely ill. The statement also said that the National Bureau of Investigation is already looking into allegations of overpricing.