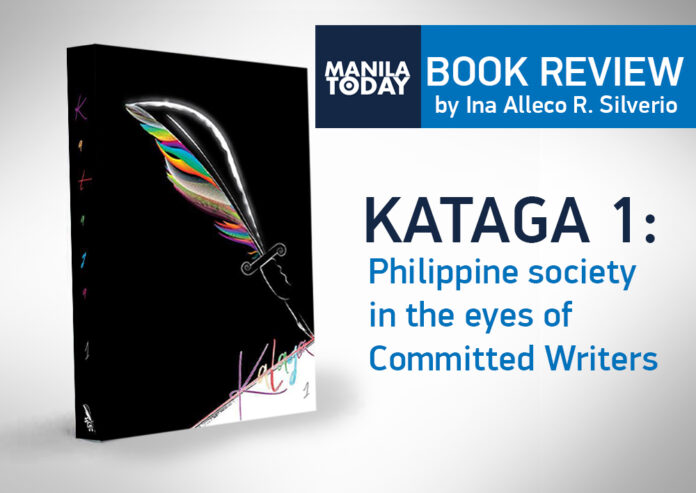 Kataga 1: Philippine society in the eyes of Committed Writers

It’s been often said after Martial Law, writers in the Philippines have become very difficult people to organize for a cause. Because they’re allegedly too egotistic. Because they all think they secretly think they’re better than their peers. Because they’re just simply too damn busy to care about anything else their own work.

These accusations against writers may be true in many cases, but they do not apply to all writers. There are still many Filipino writers – poets, fictionists, playwrights and non-fictionists – who remain committed to different political causes, and they express their convictions through their writing. Some of these political causes include fighting for the Filipino language and its continued inclusion in the college curriculum, and writing about the experience of ordinary Filipinos who belong to the marginalized sectors.

[quote_center]There are still many Filipino writers – poets, fictionists, playwrights and non-fictionists – who remain committed to different political causes, and they express their convictions through their writing.[/quote_center]

The group Kataga (which means “word”) is comprised of such writers.

The brainchild of Dr. Reuel Molina Aguila, Kataga was first established six years ago. Aguila is a professor in the Filipino Department of the University of the Philippines in Diliman. He is a poet, story-teller, playwright and editor. A Hall of Famer of the Don Carlos Palanca Awards for Literature in different genres in Filipino, he has also won awards the Palihang Aurelio V. Tolentino Playwriting Contest, the Cultural Center of the Philippines, Gawad Sagisag, National Council for Culture and the Arts and the Timpalak Panitik ng UP. He has also been received the Gawad Pambansang Alagad ni Balagtas (UMPIL), Gawad Inang Bayan (PUP), Gawad Emilio Jacinto (DFPL-UP), at and Namumukod-Tanging Guro from the Philippine Science High School.

In 2013, Kataga introduced its first anthology, not surprisingly titled “Kataga 1”. In his introduction, Aguila gives his stand on the art and craft of writing and, yes, the duty of writers whom he insists can never and should never separate themselves from the society of which they are a part.

“What will the writer write about of his world is comprised only of himself, and his concerns are primarily also about himself?”

“The duty of the writer does not stop with the completion of his piece. He also needs to ensure its artistic and literary quality, as well as meaning. He also need to make sure that his work reaches his audience.”

With the escalating debate on whether or not Filipino should continue to be taught as a course in college and universities, Kataga 1 is proof that it should. The language is our identity as a people, and literary works written in it can affect Filipino readers in ways work written in English cannot. There is much experimentation with the language and how it is used in the pieces in Kataga 1, but what [quote_right]“The duty of the writer does not stop with the completion of his piece. He also needs to ensure its artistic and literary quality, as well as meaning. He also need to make sure that his work reaches his audience.”[/quote_right]cannot be contested is how this experimentation serves to make the language even richer. There are also works that reveal the writers’ grasp of the language in its formal use, and woe to the reader who speaks Taglish and has never even read through Balagtas’ “Florante at Laura” because some of the words are hardly used in everyday spoken or even written communication.

“Kataga 1” is not the first literary anthology in Filipino to come out in recent years, but it is certainly among the very best, in terms not only of the various contributors’ control and effective manipulation of the language, but also because of the content. Its content are all written by members of Kataga, and if their work is anything to base a judgment by, they are a highly ambitious writers who are serious about the craft.

They are also serious about their social observations.

Here is a collection of poetry and narratives that successfully reveal Filipino society is many of its aspects and the dark side of the Filipino psyche. It is a literary commentary, a criticism if you will, on [quote_left]Kataga 1” is not the first literary anthology in Filipino to come out in recent years, but it is certainly among the very best, in terms not only of the various contributors’ control and effective manipulation of the language, but also because of the content. [/quote_left]what makes the Philippines a country where human rights is violated in a myriad of ways when people are, for instance, 1) subjected to the daily indignities of a highly inefficient public transport system; 2) denied living wages, decent housing and basic social services; 3) abducted, tortured and killed because of their political beliefs.

By no means is Kataga 1 compilation of literary pieces that seek to promote their own writers and emphasize their skill in creating imagery, establishing characterization and suspending disbelief (which are all, by the way, achieved by most if not all the contributors). What it is, however, is a declaration of sovereignty and assertion of intelligent awareness: Filipino writers of this generation are not blind to their nation’s history, to current events, and they do not need to follow established literary formula to produce memorable, credible work.

First, some of the poems.

Mark Angeles “Kabra” is written from the perspective of an animal that is tragically aware that it will soon be killed. The goat expresses his grief over his impending demise, even as it reveals a kind of sympathy for the miserable existence of its own master.

Angeles’ second contribution “Oplan Feline”, in the meantime, is about cats, and how they have gone missing in a community. One recalls the undying urban legend that the siopao sold by some known restaurants is made with cat meat, and the reader is lulled into thinking that this is about animal rights. In the succeeding lines, however, Angeles succeeds in turning a mystery about cats disappearing into a poem of outrage about the death of mothers, fathers, children.

Lean Borlongan’s “Pangkaraniwan is a message of both despair and hope. In it, a mother grapples with memories of her child taken by those with evil intentions. The evil is not named, but there are more than enough clues to know who the perpetrators of this evil are. The mother struggles against grief by doing what ordinary chores she did when her child was still with her, and by doing so she keeps her child alive. She clings to hope, because what else can a mother do for her missing child?

On the other hand, Rose Angelie Hernandez “Di Nakasulat na Batas” is an indictment of poverty caused by a government’s apathy and antipathy towards the poor. It is also, however, a testament to the resilience of the same poor who create their own rules as they struggle to maintain their dignity.

Because it is also the kitchen, laundry area

Against which one can rest one’s back

It is not the mansion of telenovelas

there are hardly any visitors

except for the mosquitoes and flies

cockroaches and rats that take shelter there”

Hernandez has written a succinct, exact and lyrical description of an urban poor community and the unwritten law that they need to tolerate and help each other or collectively perish.