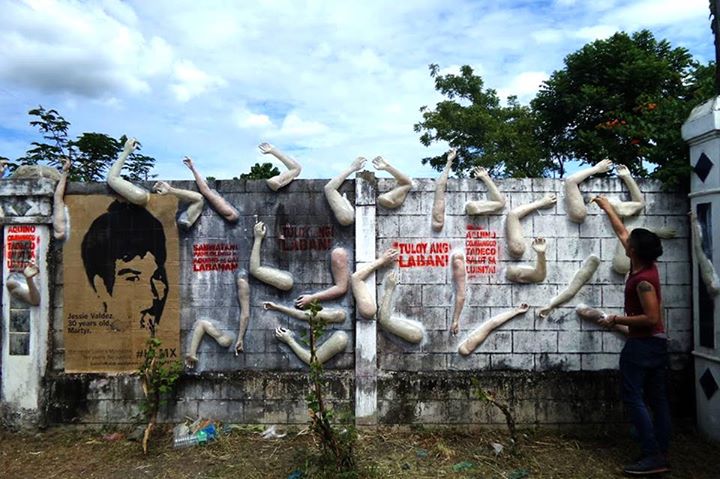 The walls surrounding the azucarera (sugar mill) in Hacienda Luisita, Tarlac have always been a line of demarcation: a barrier separating corporate complex from communal lands, a marker of brute force and bloodshed directed at peasants toiling Luisita’s expanse.

Last November, more than a thousand congregated in front of these walls to remember the Hacienda Luisita massacre of November 16, 2004 and reaffirm resistance against prevailing injustice, inequality and impunity. Among these were artists mobilised by Luisita Watch: from Jes Aznar’s #HLMX project to installation and the Stick-up workshop and exhibit of wall works,curated by Antares Bartolome and featuring Salvador Alonday, Emmanuel Garibay, Buen Abrigo, Frances Abrigo, and Leeroy New, among others.

Their contributions witnessed by communities and shared through social and mass media, helped amplify the campaign to a wider public, collectively underscore the calls for human rights and land reform, and affirm the solidarity of artists with people’s issues.

The article is purportedly written as a progressive piece. Ironically, its tone and content undermines the rich experience of the people’s movement in engaging with progressive forces, including artists.

As an organization with a long history of mobilizing artists and cultural workers to support people’s issues, the Concerned Artists of the Philippines (CAP), asserts and affirms how artists from all walks of life have positively contributed to the people’s movement. CAP has always welcomed and invited all to participate, directly and in their own ways, in the people’s struggles. We do not view the participation of “middle-class artists” as a largely transactional or expedient act, primarily aimed towards getting media mileage or concessions, but as an important part of mobilizing progressive forces and raising their consciousness and commitment. It is part of the larger task of uniting more people to collectively confront the ills of Philippine society today.

There are many concrete obstacles and hurdles to face in this undertaking. The views in the article, unfortunately, become similar to the azucarera’s wall in this respect: serving to fence out, isolate, and obscure in the cynical, divisive and arrogant attitude they cultivate.

It unfairly and hastily passes judgment on New. Like Luisita Watch and all the people’s organizations involved, CAP welcomes New’s participation in the Hacienda Luisita campaign. Before this, we take note that New participated in actions calling for the the abolition of the pork barrel system initiated by CAP and Artista Kontra Korupsyon (AKKSYON) in 2013, the junking of the Cybercrime Law, as well as other campaigns and advocacies.

It is always a challenge to perceive the world outside of the lens from which one operates. Artists, who come from all walks of life, are always invited to make use of the life and struggles of our masses as raw material to create new images, words, concepts, and experiences. It takes time, discernment, and conscious effort to create works that are conceptually challenging, aesthetically effective, and the same time resonant of the people’s sentiments and struggles. We thus prefer to place more trust in the artist’s agency and view New’s contribution as a positive initiative towards this direction of practice.

Characterizing New as a “tanyag na panggitnang uri na artista”(a famous middle class artist), the article proclaims that mass organizations are ready to collaborate with anyone, even “with the likes of New”, to further its aims. The article ends on an insinuation addressed to the progressive movement: are activists ready to challenge, instead of pandering to, middle-class artists “babied” by the ruling classes?

This is a caricature of the Filipino people’s movement and its rich experience in winning over the intelligentsia and the middle class towards the struggles of the masses. The notion that there is such a limitation and problem in organizing the middle classes and the petty-bourgeoisie is the limitation and problem itself. Reaching out to these sectors is an imperative, not a conditionality, for winning over the largest number of people to realize the vision of a better society.

In the 1960s, nationalist senator Claro M. Recto spoke about the need for a Second Propaganda Movement to counter the persistence of imperial and feudal tyranny over the Filipino people. Artists willing to support and integrate with the struggles of the masses are welcomed; there is a concrete basis for inviting them to contribute to the people’s movement for liberation.

CAP’s history affirms that mobilizing and forging alliances with artists can have a positive impact. In 1983, the Free the Artists, Free the Media campaign garnered the support of no less than 500 prominent artists who dared challenge the Marcos dictatorship’s imposition of censorship. CAP was founded shortly after, through a public meeting of no less than 60 personalities representing various cultural fields, to discuss common problems that affect them as artists and citizens as a basis for further action.

Three decades later, we attest to countless instances where artists of all kinds have sided with the people. Artists, musicians, and poets, both those already well-known and those still emerging, have always played a large part in the rallies, fora, and activities of progressive groups and basic sectors. They can help amplify campaigns and people’s issues, playing a vital role in the propagation, critique and changing of ideas through their own works and their participation in the people’s struggles. Film director and National Artist Lino Brocka, for instance, incorporated the many issues and struggles into the material for his own body of works, producing classics such as Bayan Ko:Kapit sa Patalim, and Orapronobis.

When the Hacienda Luisita massacre happened almost a decade ago, artists and poets mobilized among their ranks to visit the wake of the victims and come out with a publikasyong iglap, titled Pakikiramay (Sympathies), published by CONTEND-ACT and the Amado V. Hernandez Resource Center on December 6, 2004 through the initiative of poet Joi Barrios. Over 25 contributions were given by writers such as Rolando Tolentino, Reuel Aguila, Fidel Rillo, Lilia Quindoza-Santiago, Jess Santiago, Mila Aguilar, National Artists for Literature Bienvenido Lumbera and Rio Alma, among many others.

Ten years hence, the poetry that they produced continues to resonate with the struggle. Last December 10, during a rally marking the International Day of Human Rights, theatre actress Monique Wilson eloquently read the poem from this collection, Agunyas sa Hacienda Luisita, composed by Lumbera.

These are just a few examples of how artists in fruitful collaboration continue to affirm their commitment to the people’s movement.

People’s organizations have always challenged artists to go beyond their comfort zones. Artists have always been exhorted to reflect on how they are not merely being “babied” but, more importantly, exploited by the ruling classes in their wielding of patronage and capital. Artists, especially those from the petty-bourgeoisie, are directly affected by the same societal ills and have always been challenged to further immerse with the people and their struggles.

The many ills of Philippine society continue to fester as we speak; the masses continue to struggle for land, jobs, and rights. In this time of crises and resistance, we should not view artists as mere “petty-bourgeoisie superstars”, but form concrete relationships with them as potential allies, progressive forces, friends, and comrades in the continuing struggle to serve the people.

We end with this call and open invitation to artists from all walks of life: