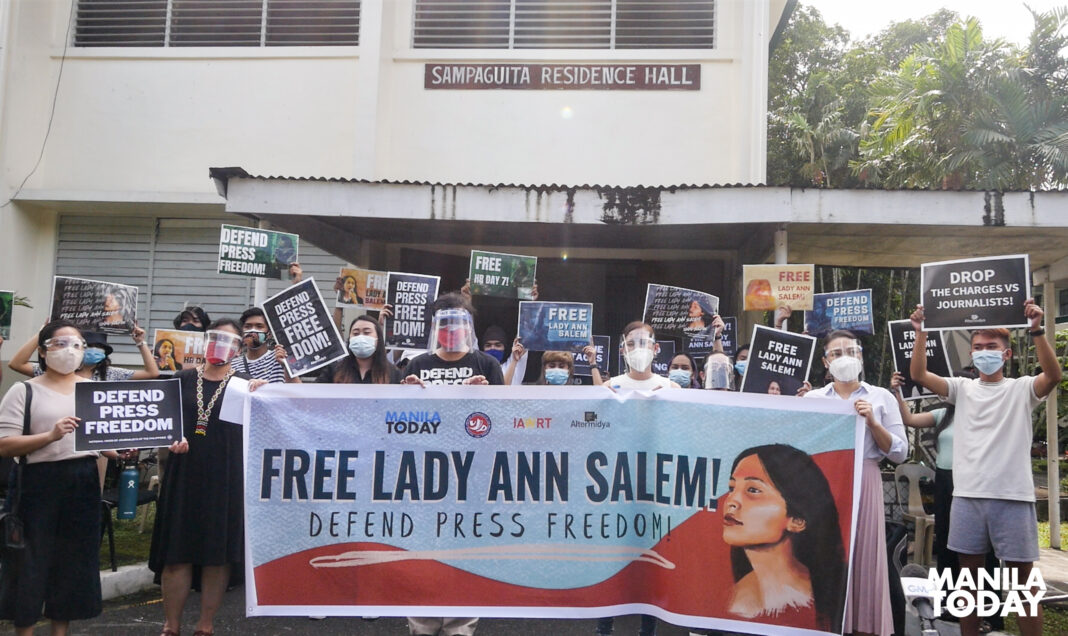 The narratives among political prisoners regarding their apprehension are stories which have been familiar and common to many as such were not isolated cases under the current regime.

Families, friends, and colleagues from various media outfits of the arrested Manila Today editor Lady Ann ‘Icy’ Salem gathered in the launching of Free Lady Ann Salem network on December 18 calling for the immediate and unconditional release of Icy.

Along with the launching was a press conference held at the Sampaguita Residence Hall, USC Office in University of the Philippines Diliman to highlight Icy’s outstanding and significant role as a sister, a leader, and a journalist upon raising awareness on the deteriorating situation of human rights in the country.

Jasma reminisced her childhood memory of Icy as her sister who is fond of books rather than toys. In fact, their family find it unsurprising when Icy got into the University of the Philippines Integrated School of which she graduated salutatorian.

Her batchmate in UPIS ’02, Sheng Dischoco recalled that it was their batch who has given her nickname Icy.

She also remembered Icy as someone who is not selective among her tasks.

Having been excelled both in the field of academic and extra-curricular activities, Icy served post as a staff and the managing editor of their school publication Ang Aninag. She was also a varsity player of the UP Women’s Junior Fighting Maroons basketball team since Grade 7 and the UPIS batch corps commander in the Citizen Army Training.

Similar to Shao Masula, Icy’s friend from UP Repertory Company, memory of Icy.

Masula noted her selflessness and warm-hearted stance upon using her intellect and niche for writing to uphold the interest of the mass, especially among the marginalized sector.

Masula, who is a media worker of GMA network commended Icy along with the alternative media groups who became particular in line with the plight of GMA talents years ago.

UP Mass Communication professor Danilo Arao attested Icy as an exemplary student. Having been a fellow of the 15th Lopez Jaena Community Journalism Workshop in 2011 among various recognitions to note during her high school and college years, Icy indeed has an integrity as a journalist.

Prof. Arao also put emphasis on the salient function of journalists in the field.

Prof. Arao also discussed Tudla Productions and Manila Today—of which Icy was a chief operating officer and an editor—which were included in the rank of media groups under the Altermidya network who have been red-tagged in a senate hearing nine days prior to the #HRD7 arrest.

National Union of Journalist of the Philippines (NUJP) Secretary-General Dabet Panelo furthered that the narratives among the harassment against the members of media were of the same tactic and pattern just so to silence the press.

It must be noted that community journalist Frenchie Mae Cumpio was arrested on February 7. Having the same account of incident transpired among other political prisoners apprehended prior to the simultaneous raid operations and later finding guns and explosives where various rights groups assailed that such evidences were planted.

“The message is clear—truth-telling is a threat,” said Bro. Ciriaco Santiago upon reading the statement of the Photojournalists’ Center of the Philippines.

Bro. Santiago stressed that Icy’s arrest and detention was a strong, warning message of the State, saying that this action “proves that anyone who will speak truth is fair game to being labelled, tagged, and branded.”

Icy’s legal counsel from National Union of People’s Lawyer (NUPL) Atty. Kristina Conti affirmed that these narratives and allegations were familiar and common to many, especially in line with the arrested individuals who are vocal and critical of the current administration.

The legal counsel also contested various anomalies and unclear statements from the police in line with the official allegations against the #HRD7. The police said that it the arrest was made in view of their alleged possession of firearms and explosives. A day after, the police seemingly woven and tied the story, implying that the seven was notorious in their operation as a “gun-running syndicate”.

Furthermore, two days after, the controversial National Task Force to End Local Communist Armed Conflict (NTF-ELCAC) made claims that the arrested #HRD7 were top ranking officials of the CPP-NPA-NDF.

Atty. Conti noted that these accounts were not even included in the official allegations made by the police.

The legal counsel depicted a well-established pattern: from the arrival of raiding police onto the residence during the wee hours, followed by the people living inside being forced to turn their backs with hands tied up and even held at gunpoint; eventually, anytime soon, the “official search” will begin as alleged guns and explosives would be found somewhere within the area.

Subsequent to the launch, Altermidya network along with Bulatlat, Kodao Productions, and Pinoy Media Center Inc. has formally filed their sixth complaint at the Office of Ombudsman in Quezon City against the three government officials under the controversial anti-communist task force infamous of red-tagging and branding as fronts of the armed struggle.

According to the media complainants, the “baseless and malicious red-tagging by the NTF-ELCAC against alternative media outfits not only violates press freedom but also causes harm to member outfits across the country.

Through the NUPL, criminal and administrative charges such as violation of Republic Act (RA) 3019 or the Anti-Graft and Corrupt Practices Act and RA 6713   or the Code of Conduct and Ethical Standards for Public Officials and Employees were brought up against NTF-ELCAC spox Lt. Gen Antonio Parlade Jr. and Lorraine Badoy, along with Executive Director Allen Capuyan. Badoy also served post as the undersecretary of Presidential Communications Operations Office (PCOO) while Capuyan is the chairperson of National Commission on Indigenous Peoples (NCIP).

The complainants further asked the Ombudsman to probe their charges against the three, placing them under preventive suspension during the said investigation and hereby urge for dismissal from service with forfeiture of benefits.

Such actions were made by the alternative media outfits prior to the assertions made by NTF-ELCAC, alleging that Altermidya and its member organizations are part of CPP’s National Propaganda Bureau.

“Red-baiting and terrorist labelling of the NTF-ELCAC show disrespect for constitutional rights, and its officials should thus be held liable for grave misconduct, dishonesty, oppression, and for acting against ethical standards expected of public officers,” said Altermidya in their news report.