Home FEATURES A mother and a daughter’s furlough 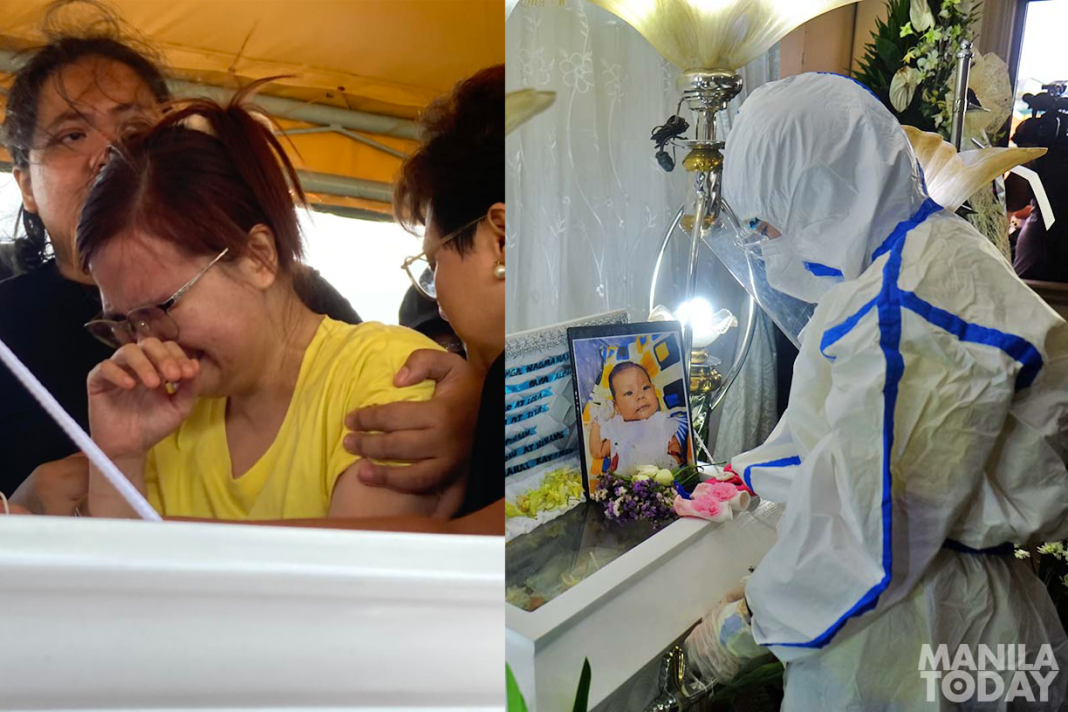 On November 9, Human Rights Day 7 political prisoner Romina Astudillo or Mayang as she was fondly called by her kin was able to join her mother’s burial for about two hours. This is the first time she stepped out of jail and saw a handful of her family members since she was arrested on December 10, 2020.

For most prisoners, and political prisoners even, a granted furlough is a rare venture out into the sun. A breather, perhaps. A 100-step walk in one direction, where in most cramped prisons that is not possible. Still, she brought prison with her as she was in cuffs as she grieved and wiped tears from her eyes.

At least 25 armed escorts from the Bureau of Jail Management and Penology (BJMP) and their vehicles and police and their vehicles accompanied Mayang during the temporary liberty given the granted furlough motion she filed before the Quezon City Regional Trial Court (RTC) Branch 84.

Karapatan National Capital Region (NCR) was surprised to see the party from the BJMP and police and many other uniformed personnel roaming the area almost doubled the crowd in the middle-of-the-week burial in the quiet Plaridel town in Bulacan.

Any daughter or son who had lost their parents would know of a visceral pain, something that felt like a part of them died with their immediate progenitors. Mayang had to process the reality of her mother’s death, her coffin in front of her, in the few hours given her during the furlough.

While listening to messages of farewell from her siblings and other relatives, around five BJMP personnel sat around Mayang, instead of family members to comfort her.

While standing over the coffin and looking at her mother for the first time in that visit and the ultimate last time, the close-in personnel stood around Mayang once more, too close to family members inconsolably crying.

It was all part of the protocol, the jail guards would probably say. But to Karapatan NCR, it was a tragic picture of the justice system in the country, where a person politically persecuted had been unable to grieve in peace and spend as many last minutes with her mother.

Had there been none of the “trumped-up charges” against Mayang, they said, that would have been a different affair, a different picture.

The rights group likened the situation with another woman activist and a political prisoner from the Tondo 3, Reina ‘Ina’ Nasino who was granted a total of six-hour furlough—from an original three-day furlough—to visit her deceased baby Emmanuelle River’s wake and burial. River was separated from her mother after six weeks after her birth which had indications of a difficult pregnancy for her mother. She succumbed to respiratory illness in October 2020.

The furlough was shortened upon the petition of the BJMP in Manila City Jail, citing a lack of personnel. However, 48 jail personnel escorted Ina during the three-hour furlough for the wake of baby River.

Ina’s motion to stay with her daughter and continue caring for her was denied by the previous Manila RTC branch handling her case, who had since inhibited the case. The BJMP in Manila City Jail (MCJ) also countered this saying Ina was no longer breastfeeding—this and other things that the court gave more weight than that River was born with low birth weight and yellow skin discoloration while Ina basically had no prenatal care. She got only one check-up that was routine for her transfer from the custodial jail she was into the MCJ. Ina was also mixed feeding, according to her lawyers. And it would have been easy to sympathize that even some mothers living in better conditions and eating healthier food would have difficulty producing milk. Both mother and daughter suffered in pregnancy and after.

Mayang’s mother Phoebe was 70 years old. River was three-months-old when she died.

Meanwhile, the Muntinlupa City RTC Branch 205 denied detained Sen. Leila De Lima’s furlough request to attend her son’s graduation in May 2018. According to Judge Amalia Fabros-Corpuz, De Lima cannot be given a different treatment as that of other prisoners whose liberty is curtailed, pending the final resolution of their criminal cases.

Karapatan NCR lamented the inconsistent remarks of several courts upon the issuance and granting of furlough motions between big personalities and political detainees like De Lima, and with Ina and Mayang.

Four of the HRD 7 and the Tondo 3 continue to languish behind bars.

Three of the HRD 7 were released upon quashal of the warrants against them, leading to the dismissal of their cases. All their warrants came from a single police application and narrative that they were part of a gun-running syndicate. Because they were arrested separately, four separate cases were filed against them in four separate courts and their cases have proceeded differently in the respective courts. For the three who were released, the courts that handled their cases found material inconsistencies in the application of the warrants and found irregularities in their implementation.

But Mayang along with co-accused Mark Ryan Cruz and Jaymie Gregorio’s motion to quash the warrant against them was denied in April 2021, just over a month since the release of the first two of the HRD 7 who were released, Manila Today editor Lady Ann Salem and Rodrigo Esparago.

Meanwhile, the Court of Appeals has granted Tondo 3’s petition for certiorari citing grave abuse of discretion against the previous judge that denied their motion to quash the warrants against them, the same judge that separated Ina and River. The Office of the Solicitor General appealed the CA’s decision and that remains pending, as well as the main case of the Tondo 3 on possession charges.

The warrants for all 10 of them came from Quezon City Executive Judge Cecilyn Burgos-Villavert. The judge issued warrants against activists and journalists in Manila, Quezon City and Mandaluyong in Metro Manila and Bacolod City in central Visayas, leading to pre-dawn police raids and the arrest of 76. Around 19 of them remain in jail on other “trumped-up charges,” while the rest are either out on bail or freed upon the dismissal of their cases.

On November 3, the Tondo 3 filed before the Manila Regional Trial Court Branch 47 a joint petition for bail, citing the favorable decision from the appellate court along with the material discrepancies in the implementation of search warrants. The hearing for the bail petition is set on November 15.

All these legal battles for political prisoners are underway in accordance with the wheels of the justice system that has ground exceedingly slow. When will they be set free? No one knows. Will they achieve justice after being set free is a question former political prisoner Salem has belabored.

“After my release, I realized there can be no reparations equal to what I had gone through. To be raided in your house like that, to be arrested knowing full well your rights were being denied and to be jailed all the while being innocent. I was in jail only for almost three months, what more for those who spent longer. It cannot be undone, there is no balm to soothe it. If justice means being freed from prison, then how inadequate it is? We can only fight and make sure this does not happen to anybody else, then that might be how we find justice,” said Salem.

This is something that the rest of the political prisoners in the country—over 400 of them—have yet to ponder in due course of their (hopefully) freedom.

For a mother and a daughter who have sought and been given furlough does not actually provide a sigh of relief.

Unlike big-name personalities who can celebrate birthdays and weddings and visit the sick in-law, we have a mother like Ina and a daughter like Mayang who have endured every pain and sorrow while spending a little freedom that they should not have been deprived of in the first place.