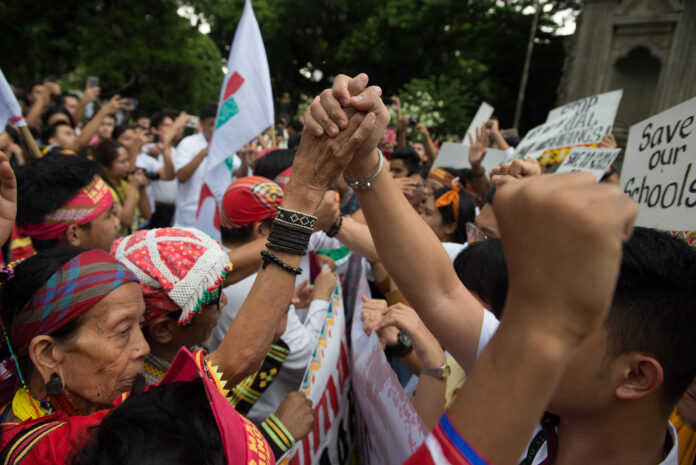 (We do not dream [to get in] a big university such as the University of Santo Tomas. We do not dream of delicious food. All we want is for our teachers to be respected, for our rights to be recognized.)

Gatangan, a student of the Community Technical College of South Eastern Mindanao, joined about 70 other Lumad students, parents, and volunteer teachers as they set up ‘bakwit schools’ here in Metro Manila in hopes that their voices and calls would be heard by more people in the face of martial law in Mindanao.

Yesterday, UST once again welcomed the Lumad to their campus as students and teachers gathered in front of the historic Arch of Centuries with raised fists and with chants against martial law and military attacks on Lumad communities, among others.

(We are opening up UST to you to be one with you in your struggle.)

The Lumad were also joined by Australian missionary Sr. Patricia Fox, Rural Missionaries of the Philippines national coordinator Sr. Elen Belardo, and Fr. Oliver Castor of the Congregation of the Most Holy Redeemer—who turned over the sanctuary program of the Lumad bakwit school to UST from the Baclaran Redemptorist Church which housed them starting August 31.

(We call on church people to open up their schools, convents, seminaries as a place of sanctuary [to the Lumad].)

UST was one of the schools in Manila that hosted the Lumad during the Lakbayan ng Pambansang Minorya campaign September last year. According to Gatangan, military attacks against the Lumad and their schools have only intensified upon their return to their communities in Mindanao, especially with the Congress voting to extend martial law in region until the end of the year.

(We, the youth, are defending our rights. We demand an end to the killings of our fellow students and an end to trumped-up charges against our teachers, parents. We hope for you to join us in our struggle.)

According to 2018 data from Save Our Schools Network (SOS) – Mindanao, 57 Lumad schools have been forcibly closed under martial law in Mindanao, affecting more than 2,200 Lumad students.

Aerial bombings and military attacks on Lumad schools and communities have also intensified under the government’s Oplan Kapayapaan counterinsurgency operations after President Rodrigo Duterte threatened to bomb the Lumad schools in Mindanao last year, accusing their students, their parents and their teachers of being members of the New People’s Army.

Duterte’s pronouncements have forced the Lumad to evacuate their schools and communities due to threats from military and paramilitary forces.

In a joint statement, the UST Central Student Council and the UST Student Organizations Coordinating Council—which represents all student organizations in the university— denounced martial law in Mindanao and attempts to further extend it, and urged all members of the university to take part in the struggle of the Lumad for education and self-determination.

The struggle for land, education and self-determination

Rius Valle, SOS – Mindanao spokesperson and one of the Lumad school volunteer teachers who have been slapped with charged such as grave coercion, serious illegal detention, public disorder, alarm and scandal, said that all of these are mere tactics for the Lumad to give up their ancestral domains to the plundering of investors from large mining companies.

Instead, Valle says that what the Lumad actually want is respect for human rights and their rights to education and self-determination.

UST Simbahayan Community Development Office director Mark Anthony Abenir likened the Lumad to refugees who are violently driven away from the lands by companies.

(We can identify our Lumad brothers and sisters as internal migrants and refugees because they are continually harassed and driven away from their ancestral lands so large companies can plunder their land for profit.)

(To the best of our abilities, we will devote our time to listen and express solidarity with their life stories, and to give donations as well.)

(I challenge you to be one with us and to defend our rights, not only for the few but for all. Uphold education that liberates and the right to ancestral land and self-determination.)