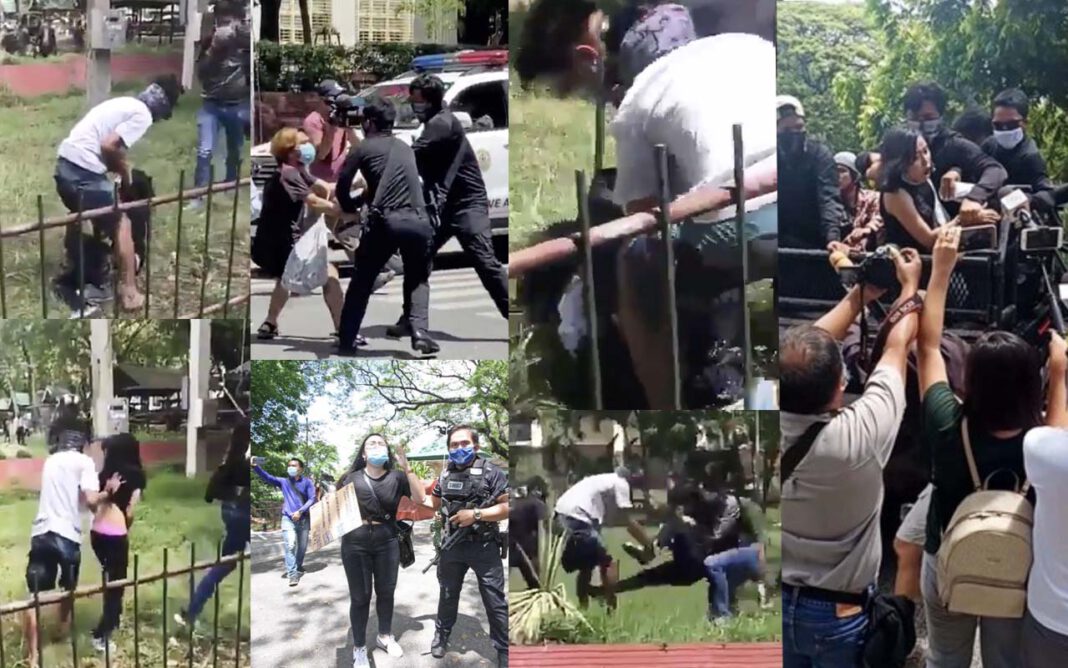 The Concerned Lawyers for Civil Liberties (CLCL) condemned the spate of arrests by members of the Philippine National Police (PNP) of people exercising their constitutional right to freedom of expression, such as the recent arrest of student protesters in the University of the Philippines (UP) Cebu.

CLCL, as well as the National Union of Peoples’ Lawyers, have repeatedly said during the lockdown that there is no law prohibiting rallies during the COVID-19 period, and arresting people on the mistaken belief that rallies are no longer allowed is without basis in law.

The groups said the arrests have no legal basis in the Bayanihan to Heal as One Act or (Republic Act or RA No. 11469) or the Mandatory Reporting of Notifiable Diseases (RA 11332), which do not prohibit rallies nor contain provisions allowing the police to arrest people on alleged violation of “mass gathering rules”.

Even the rules of the government COVID-19 response policy-making body Inter-Agency Task Force on Emerging Infectious Diseases (IATF), also known as the enhanced community quarantine or ECQ rules or guidelines, do not provide for the prohibition of rallies or the arrest of rallyists.

Criminal laws are strictly construed as the Supreme Court declared in the case of Centeno vs. Villalon-Pornillos (G.R. 113092, September 1, 1994), the CLCL said.

“It is a well-entrenched rule that penal laws are to be construed strictly against the State and liberally in favor of the accused. They are not to be extended or enlarged by implications, intendments, analogies or equitable considerations. They are not to be strained by construction to spell out a new offense, enlarge the field of crime or multiply felonies,” the group said in its statement.

The group highlighted that the “legally baseless arrests” are worsened when we see the discriminatory implementation of quarantine rules when the police arrest ordinary people for mass gathering while leaving National Capital Region Police Office chief Gen. Debold Sinas and supporters of President Rodrigo Duterte untouched for committing the same acts.

Additional agreement violated in UP Cebu arrests
Meanwhile, the group pointed out that the arrest of protesters who were inside the UP Cebu campus was in direct contravention of the DND-UP Agreement and was unnecessary. The Soto-Enrile accord states that no members of the Armed Forces of the Philippines, the PNP, or the Citizens Armed Forces Geographical Unit can enter its premises without prior authorization of UP officials.

News articles have reported that the police justified their entry into UP and subsequent arrest of the protesters and also a bystander because of hot pursuit. However, a hot pursuit presupposes the commission of the crime. A peaceful protest is not a criminal act.

“In fact, Section 9 of Batas Pambansa 880 prohibits police interference in peaceful assemblies.  The arrest of participants and a bystander also violates Section 13 which states that ‘no person can be punished or held criminally liable for participating in or attending an otherwise peaceful assembly,’” the group explained.

The eight arrested in UP Cebu were released on June 8.

Offer of assistance to those arrested illegally
The CLCL called on the police to desist from arresting people exercising their constitutional rights to freedom of expression and petition government for redress of grievances.

The group also reiterated its willingness to provide legal services to defend those arrested, and prosecute those who commit illegal arrests.

“Time and again, the behavior of the police reminds us to remain vigilant and to be mindful of our rights. A gathering to peaceably address the government for grievances is provided by no less than the Constitution, and violently dispersing such mass actions are deplorable, inhumane, and deeply violative of the law,” said the group.