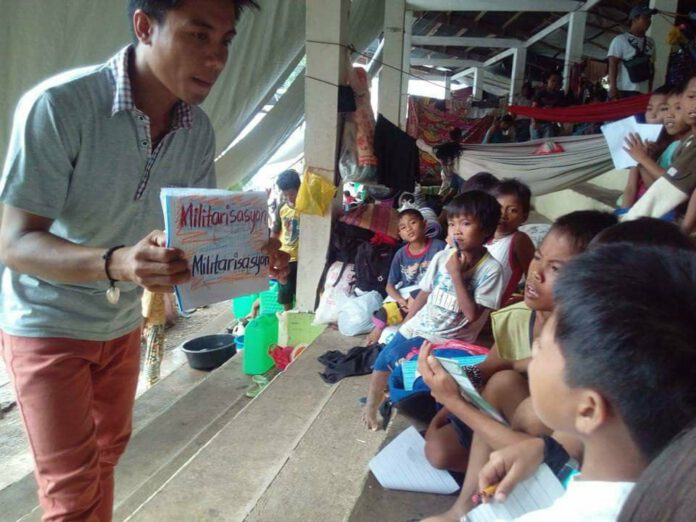 It has come to our attention that our photo was used to spread black propaganda against Lumad schools Tribal Filipino Program of Surigao del Sur (TRIFPSS) and Alternative Learning Center for Agricultural and Livelihood Development, Inc. (ALCADEV).

The original photo (above) was taken days after elements of the Magahat-Bagani paramilitary group attached to the 36th Infantry Battalion murdered ALCADEV executive director Emerito Samarca and Lumad leaders Bello Sinzo and Dionel Campos on September 1, 2015. More than 3,000 Lumad civilians evacuated to Tandag City. The photo, taken in Tandag Sports Complex in Surigao del Sur, shows a volunteer teacher informing Lumad children of their situation as ‘bakwits’ due to militarization.

The edited photo (below), taken in September 2015 by Max Santiago, was edited with a hammer and sickle and its purpose reinterpreted and posted by a certain Lipus Makapandong on December 1, 2017 on Facebook. The post accuses TRIFPSS and ALCADEV as schools that teach students to rebel against the government and take up arms. The same photo is printed on a flyer, bearing the same accusations against TRIFPSS and ALCADEV. Lipus Makapandong is the Facebook account of the 401st Infantry Brigade of the Armed Forces of the Philippines stationed in Agusan Del Sur.

Under Philippine copyright law, the use of our photo is a clear case of copyright infringement. Copyright infringement is committed when the economic and/or moral rights of the author/s are violated. Section 193 of the law avers that the author/s have the right “to object to any distortion, mutilation or other modification of, or other derogatory action in relation to, his work which would be prejudicial to his honor or reputation”.

To distort and use our photo without permission and spread fake news about Lumad schools not only harm our credibility as journalists, but place grave threat on school administrators, teachers, students, and Lumad communities.

Spreading false news against civilians and people just standing up for their rights make them a target of Duterte’s pronounced crackdown on groups and mass arrests of activists, as wee see a rise in the number of innocent civilians being killed.

As reporters, we have been to these schools, have met their schoolteachers and administrators. These institutions design their curriculum to the needs of the community; teachers primarily teach agriculture aside from basic courses such as reading, writing, and arithmetic. Schools are built and supported by the Lumad community, church groups, and other non-government organizations.

Contrary to what is stated in the post and on the flyers, TRIFPPS and ALCADEV are recognized by the Department of Education and the local government units and registered with the Bureau of Internal Revenue, and the Securities and Exchange Commission. As a matter of fact, the National Literacy Coordinating Council awarded ALCADEV the Outstanding Literacy Program award during the National Literacy Awards in 2014. The ceremony was attended by the DepEd council, regional DepEd officials, local government officials, and local officials from the Philippine National Police.

These schools were the community’s own response to the government’s decades of ineptness of providing education for the Lumad children and inability of bringing even an ounce of so-called development (no water, electricity, roads, markets, schools, hospitals, etc.), even as the Lumads’ ancestral lands were profited by the billions of dollars by big multinational mining and plantation corporations.

We call on Facebook to remove all posts containing the unwarranted use and editing of our photo for pernicious reasons and inviting harm against national minorities, especially their children and youth.