Home OPINION No Peace, Only Force 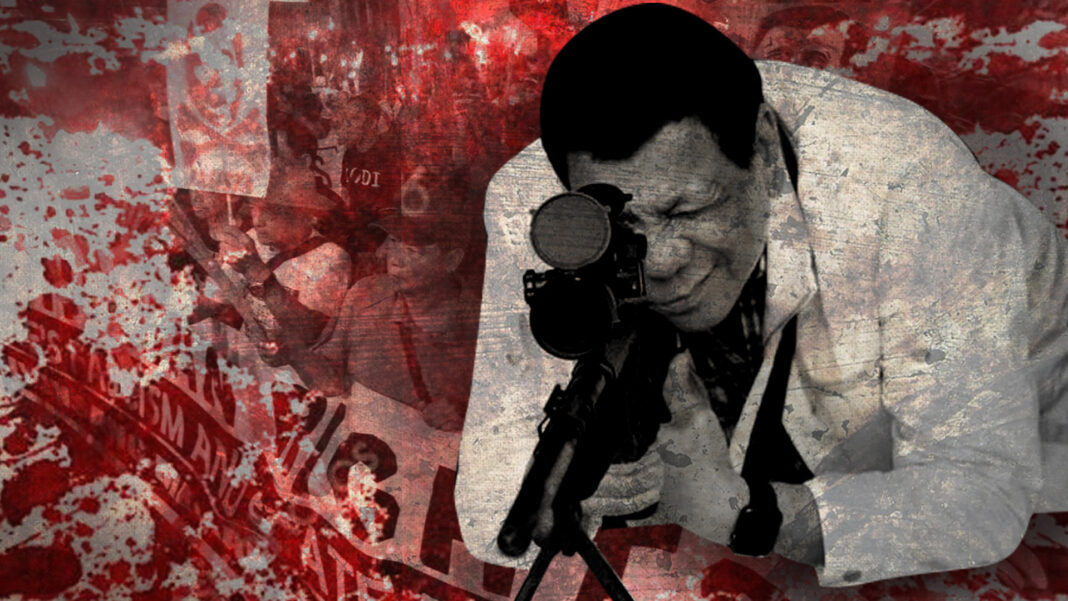 The pathological mood swings and verbal obscenities of our present leader not only make headlines, they distort the truth and divert significant issues into the margins. George Orwell observed in the 1940s that “the present political chaos is connected with the decay of language.” That statement aptly reflects the state of present politics in the Philippines.

A particular case is the declaration of the president to equate communists with terrorists. No explanations nor sensible definitions given. The president exclaims and that’s it. To equate communists with terrorists serves a dual function. First, it renders the military a legal excuse to persecute anyone it deems to be a communist; in the guise of fighting terrorism the military is sanctioned to do everything in their power to curb any form of criticism and revolt against the state; it even goes so far as as to steal and edit a photo for propaganda use. The counterinsurgency program of the military, with which the poor countryside is all too familiar and has already claimed a significant number of lives, has created conditions of fear and terror; it is meant to discourage criticism and activism and to dissuade any sympathy from the public. Second, it serves to erode the crucial issues that are in the first place the cause of the discontent and revolt of the oppressed camp: neoliberalism, neo-feudalism, landlessness, the hopeless agrarian reform, poverty, environmental destruction, etc.

It would be helpful to define terrorism to clear the verbal rubbish heaped on political language. Terrorism is defined by the US Army manual as the “calculated use of unlawful violence or threat of unlawful violence to inculcate fear. It is intended to coerce or intimidate governments or societies … [to attain] political, religious, or ideological goals.”

Following this definition, with worldwide condemnation by human rights organizations, the Philippine government fits the role of the leading terrorist. “The rising killings of human rights defenders and political activists in the Philippines,” said Amnesty International; the government’s inability to guarantee to “put an end to all acts of harassment and intimidation against all human rights defenders,” as stated by Geneva-based World Organization Against Torture (OMCT); and most importantly the despicable failure of the government to hold to account “those responsible, including those with command responsibility.”

The decision of the government to abandon the peace talks which could have resulted in a positive settlement with the communist party reveals the government’s profound contempt for peace. To abandon the negotiating table itself is a crime– a call for bloodshed. It is a cowardly indication of the government’s inability to engage in a peaceful, intelligent, and civilized manner. Instead, it has once again preferred the use of force as has been the case all throughout this country’s history. Take the1940s under the president Manuel Roxas:

“The Roxas government instituted an all-out campaign of military suppression against the PKP (Partido Komunista ng Pilipinas or Communist Party of the Philippines) and the Huk veterans… In a last-ditch effort, the Huk and PKP organizations responded with a memo to the president urging all steps be taken to forge a peaceful resolution, asking, among other things, that private armies–landlored-sponsored and financed, and often the flashpoint of physical confrontations–be disbanded, all charges against the Huks for initiatives taken during the war be dismissed, that the Democratic Alliance congressmen be allowed their seats in Congress, and that civil liberties be restored… The government’s response was to increase militarization [and]… Secret orders were issued for the arrest of Huk top leaders.” – (A History of The Philippines by Luis H. Francia)

Under the current administration of Duterte, history is repeating itself. No peace, only force.