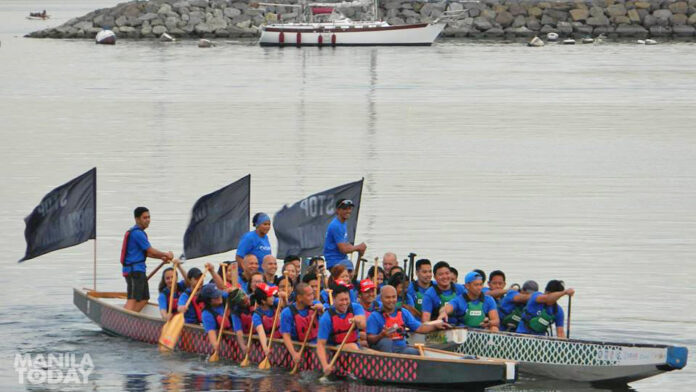 Fisherfolk under the group Pambansang Lakas ng Kilusang Mamamalakaya ng Pilipinas (PAMALAKAYA) this morning held a bayside protest against planned reclamation projects in Manila Bay at the coastal shore of the Harbour Square Manila. The group then marched to the Cultural Center of the Philippines (CCP) complex carrying a municipal fishing boat with a call to stop reclamation.

According to the group, the symbolic protest asserted that reclamation projects will further destroy marine ecosystem, trample upon the socio-economic rights of fisherfolk, and bastardize the historic glory of the bay.

The protest was joined by four boats of the Philippine Dragon Boat Team and a yacht of the Manila Yatch Club that symbolized their unity against reclamation in Manila Bay and across the country.

Since 1970, the reclamation projects caused an alarming reduction in the average fish catch of small fisherfolk from 10 kilos daily to a measly 2-5 kilos of fish a day.

“The past infrastructure projects in Manila Bay carried out by previous administrations, with foreign monopoly firms had displaced communities and destroyed the capability of the bay to provide livelihood to millions of small fisherfolks and poor residents,” Fernando Hicap, PAMALAKAYA chairperson said.

The fisherfolk group also added that the conditions of Manila Bay further deteriorated when the past governments allowed the reclamation of more than 20, 000 hectares of coastal area since the time of Marcos dictatorship.

Based on their records, the site were installed through reclamation are the Folk Arts Theater, Cultural Center of the Philippines, Coconut Palace, GSIS with the Senate Building and recent additions were the SM Mall of Asia, Solaire Resort and Casino, City of Dreams and Okada Manila.

“Reclamation projects in the name of profit, is the  anti – thesis of people’s effort to genuinely rehabilitate Manila Bay. It also undermines the high court’s mandamus for it’s restoration for the people’s benefit and welfare,” Hicap added.

The 43 reclamation projects in Manila Bay covering more than 30, 000 hectares of fishing waters. These projects will entail displacement, eviction of hundreds of thousands fisherfolk, urban poor communities and total destruction of environment.

On the other hand, green group Nilad Metro Manila Environmental Network said that the reclamation issue should be top priority in electoral agenda of the candidates running in the May midterm elections this year.

They also added that the electoral candidates must take a stand against all reclamation projects in Manila Bay.

Hicap disclosed that many sectors, organizations, individuals, and even celebrities from all walks of life pledged commitment to the broad alliance promoting pro-people, pro-environment rehabilitation of Manila Bay, which is synonymous to opposing destructive and profit oriented reclamation.

The fluvial protest was part of the two day People’s Summit on the Impacts of Reclamation which was organized by PAMALAKAYA, Oceana Philippines, Kalikasan Peoples Network for the Environment and Center for Environmental Concerns on March 26 to 27 at the Bayleaf Hotel Intramuros in Manila.