Pangarap Village lives up to its name. Around 40,000 residents have woven and triumphed dreams and hopes for themselves, their kin and children, and for their grandchildren in the future.

They are a community of people who keep their dreams alive – people who built homes and maintain small-scale businesses. They also have a local school for both elementary and high school students and a place for worship to thank God for their strength and blessings.

However, a certain Greggy Araneta is claiming land ownership to the 156-hectare land north of Caloocan City. 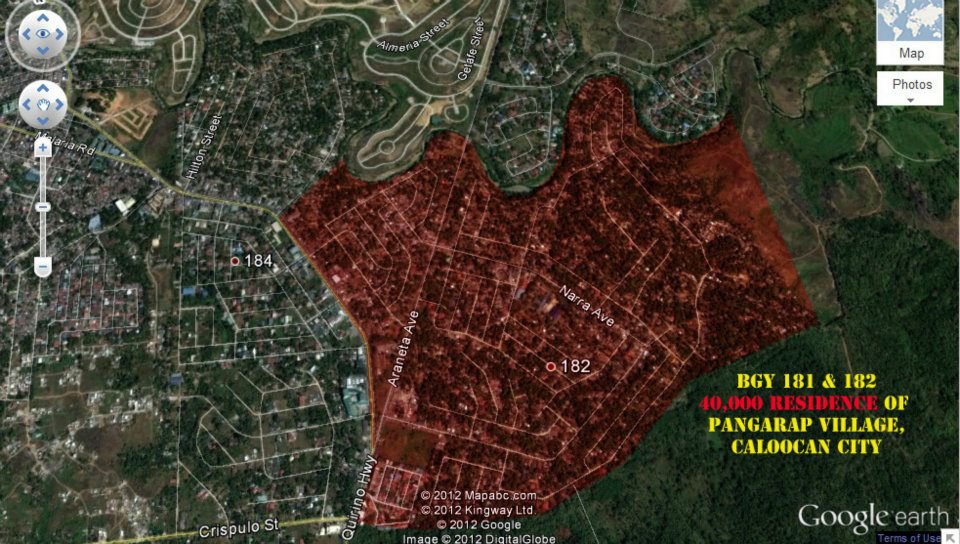 Gregorio Ma. “Greggy” Araneta III is CEO of Araneta Properties Inc., a real estate company, and also an executive of Carmel Development Inc. (CDI) (formerly known as Carmen Farm, Inc.). He came from the wealthy clan of the Aranetas and is uncle to Department of Interior and Local Government (DILG) Secretary Mar Roxas.

Through Presidential Decree (PD) 293, late president Ferdinand Marcos in 1970s cancelled all sale contracts of CDI in Pangarap Village, and granted the land to employees of Malacañang and urban poor families.

But in 1988, during the term of late president Corazon Aquino, the Supreme Court ruled PD 293 null and void. Since then, the residents of Pangarap Village have been struggling for their rights to their homes.

But unlike government-owned lands, residents of Pangarap Village, composed of barangays 181 and 182,  will not be given relocation. Because Araneta claims the land as his private property, he is not liable to its residents, giving him the “authority” to do whatever he likes.

When the Manila Today team visited the village last June 17, we were able to confirm that the residents are deprived of basic necessities. On the same day, they held a protest rally outside the DILG office. They sought help, hoping the government would intervene to the harassments the residents suffer from Araneta.

A dialogue was held between Pangarap village barangay officials and representatives from DILG. The government agency made a promise that it will look into the cases of harassment perpetrated against the residents.The residents identified Araneta as the one behind a series of harassment tactics to drive the residents away from Pangarap Village, which already resulted for some residents to leave the village for good.

Based from interviews and onsite investigation that our team conducted, below are the cases of harassment against the residents.

1. Cutting off their power supply

For several months already, many residents of Pangarap Village have only been getting power supply from submeters, which they buy for P25 per kilowatt hour (almost 50% higher than a regular Meralco fee), and solar panel (one resident bought her solar panel set for P19,000).

Those who are not able afford any of the two resort to candles and gas lamps.

Power supply in some parts of Pangarap Village was cut since November last year, according to residents, while power supply in other parts was cut early this year. When we asked barangay 181 officials how it was possible, one official said the power transformer was destroyed by CDI personnel.

A local official said that in the past, CDI allowed Meralco to enter the premises as long as residents got permit. Now the harassment has become severe.

In Barangay 182, as the team was talking to another barangay official, the generator stopped because it was raining so hard. We had to talk in the dark, and their operations had to stop.

During the night, streets in Pangarap Village are pitch dark, causing a spike in petty crimes. Even classes in high school are required to end by 5pm so students can go home while there is still light. Before, classes end at 6pm.

2. Blocking the roads and hampering transportation

When our team entered Pangarap Village, we passed through a narrow entrance along the sides of the village. The car we used also had to be parked outside the village as it was not allowed to enter. 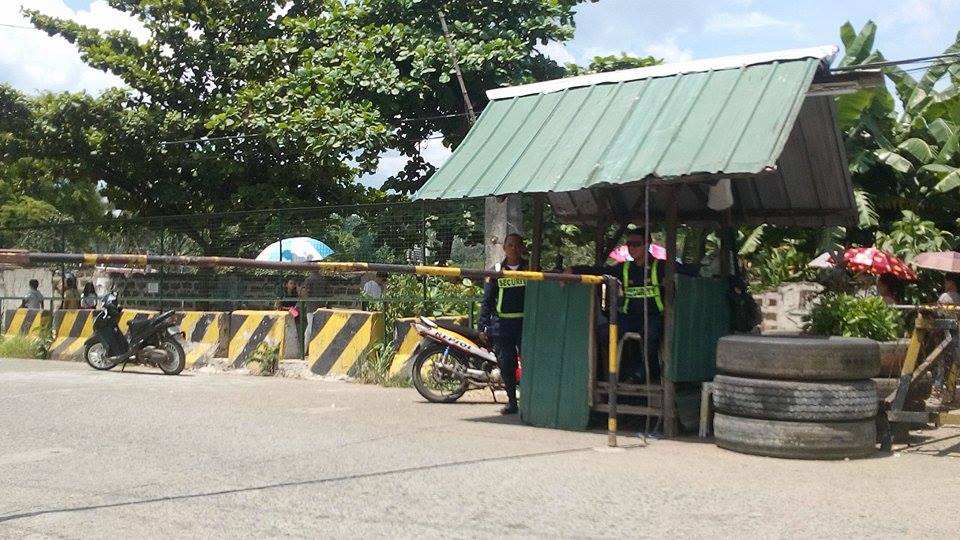 Public utility vehicles are not allowed to enter the village, only tricycles are allowed to operate, but within the premises only.

The main entrance points to Pangarap Village are blocked with boom barriers and guarded by security personnel. They inspect every person who enters the village, and only vehicles with CDI authorization are allowed to go in.

Because of this, those who own sari-sari stores are forced to hand-carry their heavy loads of items inside the village.

Even dead people are not spared of the burden.

“‘Pag may patay ka dito, hindi ka basta-basta makakapasok. Kelangan hihingi ka pa ng permit. At sila ang mag-iiskedyul ng libing kung kelan (If you have a dead relative here, you cannot easily enter the village. You must ask for permit first. Even the burial schedule are in the hands of CDI officials.),” said Diana Perez, who has been residing in Pangarap Village since 1986.

Road blockage is real burden for the residents especially during emergencies – when there is fire or health emergencies.

Road blockage is real burden for the residents especially during emergencies – when there is fire or health emergencies.

(When I had a hypertensive crisis in 2012, I experienced sudden shortness of breath. That time, they still allow vehicles inside but you have to drive the long way, at the back of the school, when it was not yet blocked. It was really hard for me, I almost did not make it to the hospital.)

One can only imagine that when life is at stake, a permit still needs to be processed, or die.

“Madalas pong emergency dito mga inaatake. Ang habol lang naman sana naming halimbawa may emergency, padaanin (‘yung sasakyan) (The usual emergency here is due to blood pressure shooting up. What we are asking for is to allow vehicles to pass when there’s an emergency),” a barangay official said.

One can only imagine that when life is at stake, a permit still needs to be processed, or die.

3. Sending bomb threats to their school (or burn it)

Scores of bomb threats in Pangarap Village School had forced at least two principals to resign. Also, according to a grade school teacher, a number of students had transferred to another school.

She cannot even count the number of bomb threats that their school have been receiving for years. The most recent incident was last June 15.

“Sa eskwelahan bomb threat lagi, siguro pang ilang principal na ang umalis dahil sa bomb threat (In our school, there is always a bomb threat that caused several principals to leave),” she said, explaining that they had to postpone their classes several times due to bomb threats.

She cannot even count the number of bomb threats that their school have been receiving for years. The most recent incident was last June 15.

On June 6, a fire took their library building allegedly due to electrical faulty wiring. But residents doubt it was the real reason because there was no electricity during that time. 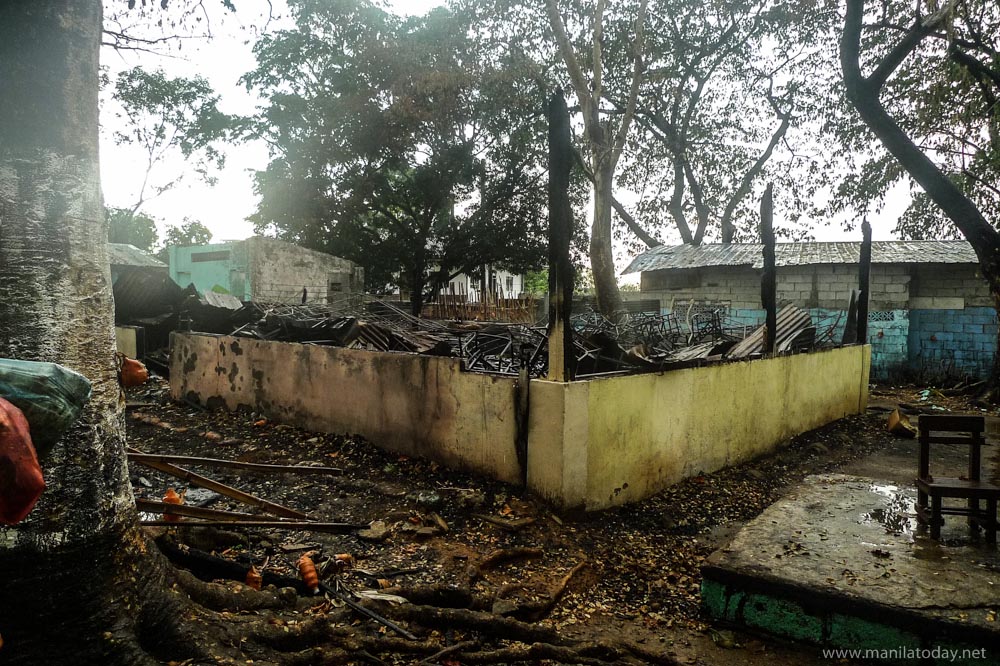 The grade school teacher said that at least four of her colleagues received a text message saying, “Hindi pa kayo nadala sa sunog, ubusin namin kayo. (You’re still not threatened by the fire. We will eliminate all of you.)”

She also complained that the sound from the generator draws setbacks in their classes everyday.

Now that their library was gutted by fire, they could only wish that another set of books would be delivered to them.

Now that their library was gutted by fire, they could only wish that another set of books would be delivered to them.

As our team walked around Pangarap Village, we noticed that many of their roads have been neglected. Walking is hard because the road is rugged with rock. We had to take caution or else a simple slip could cause physical injuries.

Residents said heavy equipment used in fixing the road is not allowed to enter their village, leaving their roads in such dire situation.

Residents said heavy equipment used in fixing the road is not allowed to enter their village, leaving their roads in such dire situation.

(We ask that basic necessities like water and electricity be given notice. Allow Meralco repairmen to enter the village and trim the trees. It has been two years since they went to Pangarap to prune the trees. Tree limbs could knock down power lines. Health workers are also not allowed to enter the village.)

5. Intimidating the residents with hired goons

(We are scared of the guards, especially when they look at us as they pass by our streets on board their service that looks like a military vehicle. They also carry guns.)

Anyone who wishes to enter Pangarap Village is welcomed by security guards with guns at the entrance points of the village.

Anyone who wishes to enter Pangarap Village is greeted by security guards with guns at the entrance points of the village. According to residents, the guards also make the rounds in every street. While they look like the usual security guards during the day, but at night, residents would see them carrying high-powered firearms.

6. Executing those who oppose

The decades-long land dispute in Pangarap Village has also triggered several incidents of murder. Residents said at least four people have been killed in relation to the dispute.

In 2011, Rommel Fortades and Soliman Gomez were killed by an allegedly drunk security guard of CDI during a vigil protest of residents against demolition. It was only a year after their deaths that the Department of Justice had responded to the case and opened a preliminary investigation.

“‘Pag palaban ka eh talagang tinatakot ka ‘pag ‘di ka pa tumigil titirahin ka, o sa madaling salita, papatayin ka (If you are really vocal, they will intimidate you. If that does not stop you, they will put your life in their hands.),” said Lumacang.

Barangay officials said dialogues with DILG Undersecretary Tom Villarin and Etta Rosales of Commission on Human Rights had been conducted in the past. But government officials showed that they were not serious in their response.

The harassments happen along with the plan of the national government to build MRT-7 that will run from EDSA to San Jose Del Monte, Bulacan. An MRT-7 station will be built along Pangarap Village.

It was reported that Araneta plans to convert the area into a new central district.

Residents are hoping that their dialogue with DILG Undersecretary Austere Panadero will be given attention. But it will not hinder them from taking other courses of action.

(We are ready to fight for our land rights. Why are they going to evict us, we have been living here for years? When this land was still full of coarse grass, it was nothing to them. We are not asking for a free pass. We will pay for the property if the government sees fit. Nonetheless, the government must take action and put an end to the harassments for the safety of our residents.)