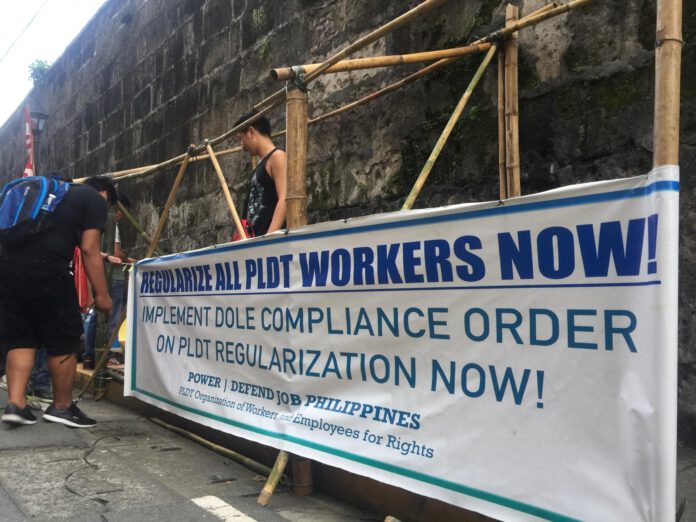 Members of the PLDT Organization of Workers and Employees for Rights (POWER) started their countdown protest camp-out and vigil at the main office of the Department of Labor and Employment (DOLE) in Manila today as the deadline of Labor Secretary Silvestre Bello III to the telecom giant to regularize its contractual workers lapses tomorrow, July 31.

The group said that after their mandatory conference with DOLE last July 11, Secretary Bello issued a clarificatory order to PLDT that reiterated its prior regularization directives and gave the company until end of July to comply.

Exactly one month today after PLDT terminated its service contracts with all of its agencies nationwide that led to the massive lay-offs of some 12,000 contractual PLDT workers, members of POWER set-up protest tents at DOLE to remind the agency of its commitment to immediately enforce its own orders.

“It’s been already one month today after we lost our jobs and the main source of income, and yet nothing significant has been implemented by DOLE in terms of our regularization to PLDT. We have been waiting long enough for a decisive and significant move from DOLE to compel PLDT to implement their compliance order,” said Dan Joshua Nazario, president of POWER.

Nazario added, “As we camp out today, we are hopeful that we can hear and witness a stronger position and action from DOLE in favor to our regularization. On the other hand, we urge the PLDT management to have a heart and push through with our regularization in the soonest possible time.”

POWER also casted doubts to the declared 300,000 workers who have been regularized by the government during the State of the Nation Address (SONA) speech of President Rodrigo Duterte last week.

The group attested that the 12,000 contractual workers of PLDT are surely not yet included in such list as they were still waiting for their regularization.

They also insisted that the total implementation of their regularization in PLDT could have substantiated these 300,000 data of Bello and Duterte during the SONA last week.

Nazario said, “While PLDT contractual workers remain jobless and in floating status, the 300,000-accomplishment report of the government will mean nothing but empty figures and data.”

He insisted that the regularization of the 12,000 PLDT contractuals will set a strong precedent to other contractuals in other companies with pending compliance orders.”

Before setting-up their camp in DOLE, members of POWER trooped to the Court of Appeals in Manila to stage a picket rally to urge the CA to immediately junk the appeal and petition for certiorari of the PLDT management which opposed the DOLE compliance order.

The group said that the CA must support the DOLE order and must side in favor of the regularization of thousands of PLDT contractual workers.

Aside from junking the PLDT petition, POWER also called on all CA justices not to grant PLDT a temporary restraining order (TRO) regarding this issue.

“Favoring the petition and issuing a TRO in favor of the PLDT management would prolong the sufferings of our families and would put our regularization status in danger. We are hopeful that the CA will heed our demands and will not allow itself to be used by PLDT on its greedy and anti-worker objectives,” Nazario said.