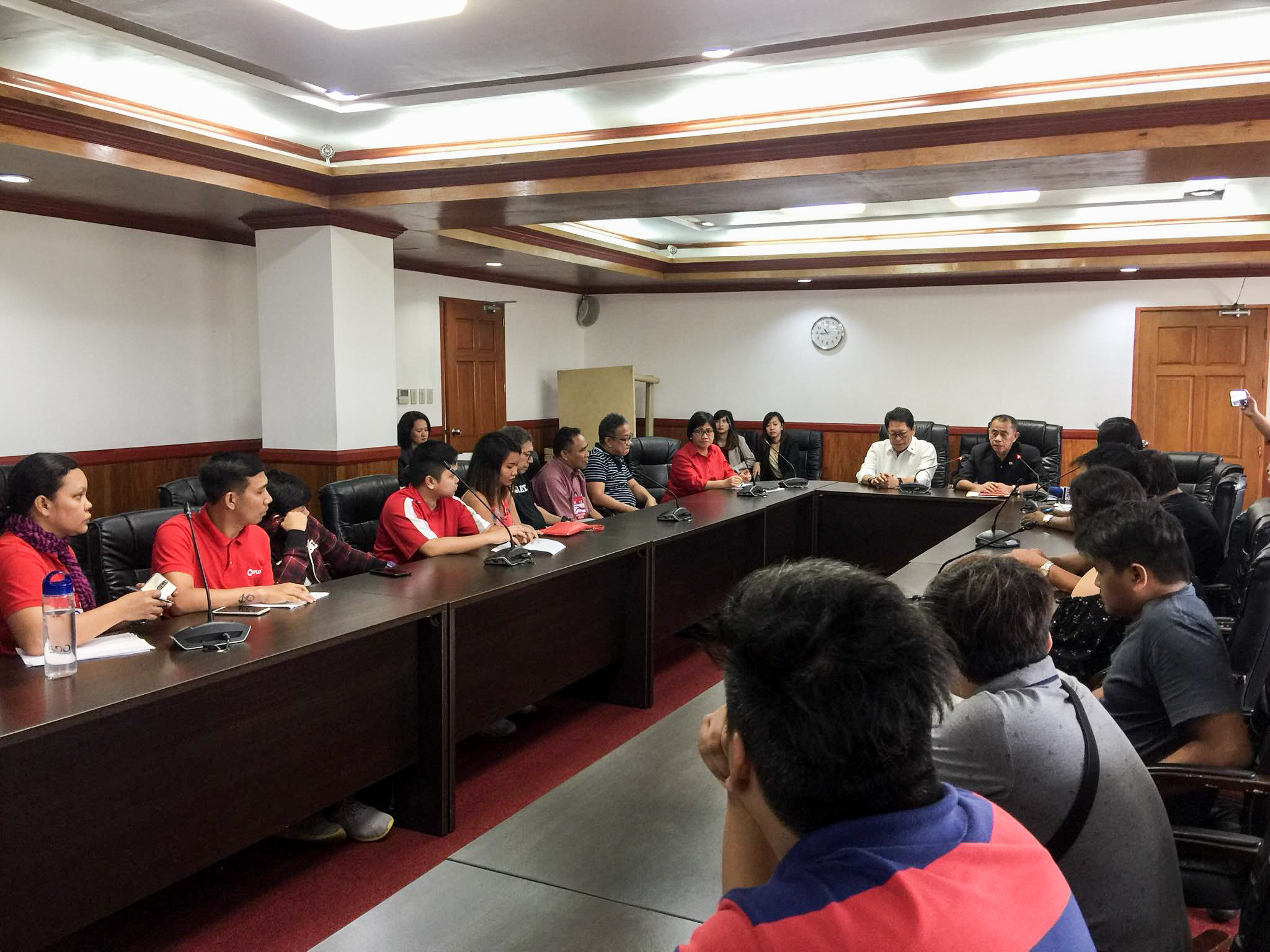 With high hopes, hundreds of terminated workers of Philippine Long Distance Telephone Company (PLDT) from its outsourced agencies including SPi CRM, Curo Technika and MG Exeo, trooped to the head office of the Department of Labor and Employment (DOLE) in Manila to urge the Labor Department and President Rodrigo Duterte to be firm and decisive enough to force PLDT to implement the Labor Department’s own ruling on regularization.

The said conference was scheduled after members of PLDT Organization of Workers and Employees for Rights (POWER) and Defend Job Philippines held a protest rally and dialogue with the labor agency last July 2 after PLDT terminated its service contracts with various agencies nationwide on June 30 that led to the massive termination of thousands of PLDT workers.

But instead of showing up to its workers, PLDT management disregarded DOLE’s notice of conference and didn’t show up at all. DOLE responded to with an issuance of a Clarificatory Order to reiterate its earlier Compliance Order against PLDT.

During the protest, POWER and Defend Job Philippines said that they are still positive that DOLE will stand by its earlier ruling that ordered the Pangilinan-owned telecom company to regularize all of its outsourced employees, as it has been ranked third by the Labor Department to practice illegal labor-only contracting scheme.

“The decision in today’s mandatory conference regarding DOLE regularization order against PLDT will neither make or break the Duterte administration’s campaign against contractualization,” said Dan Joshua Nazario, president of POWER.

He added, “Any results of DOLE’s action over disputes of PLDT and thousands of its contractual employees who were supposed to be regularized, will set a precedent to numbers of cases of other Filipino contractual workers who have been fighting for their rights to job security and regularization.”

Nazario also noted that if President Duterte is really serious in ending contractualization, then he must “show some teeth” in forcing Manny Pangilinan to start regularizing its contractual workers in the soonest possible time. POWER said that the Duterte administration must for once be brave enough in advancing the best interest of all Filipino contractual workers.

POWER, Defend Job Philippines and Kilos Na Manggagawa also laid-down their positions and demands for President Duterte, the PLDT and DOLE to immediately take up regarding their regularization and other labor concerns. The groups enumerated:

1. Regularize all contractual employees of PLDT. This call cuts across all agencies nationwide under the DOLE Compliance Order for PLDT on regularization.

2. Regularization process must be clear, immediate and inclusive to all. Unlisted employees who are practicing the same work for PLDT as those in the DOLE Compliance Order list must also be regularized.

3. PLDT must stop its 4-step process for absorbing employees for regularization. The said process is a clear move to circumvent the DOLE Compliance Order stating that the Company must immediately consider their outsourced employees as regulars. PLDT Employment identification cards must be issued immediately to the workers.

5. Implement the inclusion of all the names of employees to the payroll of PLDT starting the date of effectivity of the writ of execution. Wage rate of all those who will be regularized must be on the same wage rate as with other regular employees of PLDT.

6. Package benefits to those regular and organic employees of PLDT must also be given to all those employees that will be regularized including medical care, 18th month pay, gift checks, plotting of vacation leaves and other benefits stipulated in the Collective Bargaining Agreements (CBA).

7. Full back-wages must be paid to all employees included in DOLE Compliance Order.

8. Unpaid wages since the date effectivity of DOLE order must be paid.

The groups also called on other contractual workers to unite and push for their regularization and call for the criminalization of all forms of contractualization.

As said by Nazario, President Duterte must do all possible means to regularize all PLDT workers in time for his upcoming third State of the Nation Address (SONA) on July 23.

“Our struggle for regularization under PLDT will surely not stop after today’s mandatory conference. We will be bringing our calls for us to be regularized on various platforms and even on the streets leading to the Presidential Place and even on his SONA this month, in order for us to be assured that we can provide decent lives for our families,” said Nazario.