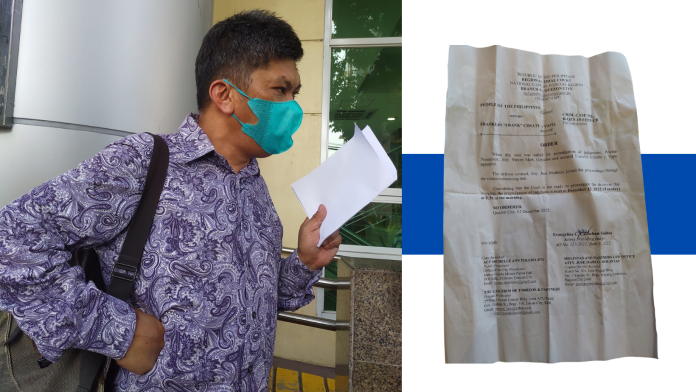 The December 2 promulgation of judgment on the cyber libel case filed against journalist Frank Cimatu was reset by Quezon City Regional Trial Court Presiding judge Evangeline Cabochan-Santos to December 13 as “the court is not ready to promulgate the decision.”

“Just like other cyber libel charges, the case against Cimatu is clearly meant to harass journalists,” said the National Union of Journalists of the Philippines (NUJP) in its statement.

The post was said to be based on a Philippine Center of Investigative Journalism that showed Piñol’s net worth increased by P21 million in 2016 from 2009.

Cimatu is a Rappler correspondent and NUJP Baguio chapter chairperson.

NUJP reiterated its call for the junking of the cyber libel case against Cimatu and the decriminalization of libel.

“No one should be punished for expressing his/her opinion, or for publishing reports about legitimate issues. NUJP reiterates its demand for the decriminalization of libel. Defamation laws in the Philippines are inconsistent with the International Covenant on Civil and Political Rights,” said the group.

NUJP said that aside from Cimatu, Quezon journalists Darcie Galicia and Noel Alamar are also charged with 941 counts of cyber libel filed by Quezon Gov. Helen Tan and her husband Ronnel Tan.

The Cybercrime Prevention Act of 2012 or Republic Act (RA) 10175 defines online or cyber libel as “The unlawful or prohibited acts of libel as defined in Article 355 of the Revised Penal Code, as amended, committed through a computer system or any other similar means which may be devised in the future.”

Also, under the Revised Penal Code, as amended by RA 4661, the crime of “libel or other similar offenses” shall prescribe in one year. But in Rappler CEO Maria Ressa’s cyberlibel conviction, the prescription, or the time limit for the filing of a complaint counted from the discovery of the crime, for libel is said to be 15 years.