Home NEWS NTF-ELCAC, Hands Off Our Children Movement not welcome in PUP – student... 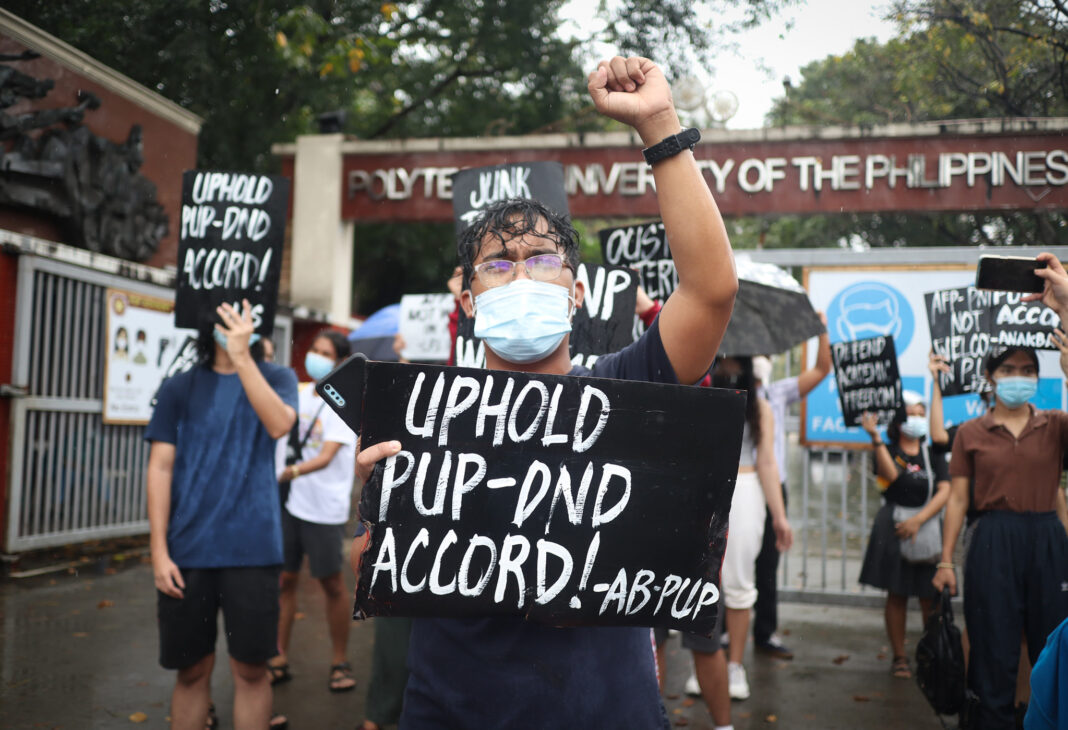 The National Task Force to End Local Communist Armed Conflict (NTF-ELCAC) and the Hands Off Our Children Movement (HOOCM) – a government agency and a group said to have been backed by that agency that both have been critical towards student activists – have been declared as ‘persona non grata’ in the Polytechnic University of the Philippines (PUP)-Main Campus in Sta. Mesa, Manila.

In a resolution filed by the PUP Sentral na Konseho ng Mag-aaral (SKM) on Saturday, the student council cited NTF-ELCAC’s red-baiting statements and HOOCM’s critical view towards student activists and critics for the declaration.

“The National Task Force to End Local Armed Conflict and its members is known for their baseless red-tagging spree and the Hands Off Our Children Movement as an enabler in silencing progressive youths through a façade of psycho-social services,” the resolution reads.

Prior to the declaration, the PUP College of Communication (COC) and College of Social Sciences and Development (CSSD) Student Councils have passed similar measures that bar NTF-ELCAC from their respective colleges, with the latter extending the ‘persona non grata’ declaration to HOOCM.

The declaration comes after an invitation to the NCR leg of the “Regional Youth Forum: The Role of Patriotic Youth in Nation-Building” webinar was circulated among first-year PUP students taking National Service Training Program (NSTP) subjects.

The said webinar was organized by the National Youth Commission, with both NTF-ELCAC and HOOCM as “special guests,” and revolved around discussions that express anti-communist and anti-progressive sentiment. PUP reportedly cancelled the event.

The PUP community members’ ‘persona non grata’ declarations towards NTF-ELCAC and HOOCM also stemmed from numerous accusations that have been made against the University.

Last year, HOOCM, along with other parent groups such as the League of Parents of the Philippines, Liga Independencia Pilipinas and Yakap ng Magulang staged a protest in front of PUP’s main gate to amplify the narrative of alleged communist recruitment in schools amid calls for a nationwide academic break.

Earlier in January, NTF-ELCAC Usec. Lorraine Badoy included PUP in their list of schools that they claim are “targeted for radicalization and recruitment” by communist fronts.

The next day, student bodies, campus papers, national democratic groups, a faculty support group and seven colleges were also explicitly linked to the communist front during an NTF-ELCAC-hosted press conference led by SAMBAYANAN, which is said to be a group of ex-members of the CPP-NPA-NDFP.

Students and youth groups have also called out the signing of a Memorandum of Understanding between the HOOCM and the PUP Psychology Department and Graduate School that aims to conduct an “intervention program” targeted towards members of militant groups. The said partnership was eventually cancelled.

“These efforts are a clear manifestation that the fascist government will not stop entering Universities and would continuously violate our academic freedom and our human rights as a whole. Different student movements arose to refrain the NTF-ELCAC and HOOCM to enter and having a space within the University,” SKM said.

Photo courtesy of The Catalyst