Home NEWS No to Marcos, Duterte in May 2022 elections – youth groups 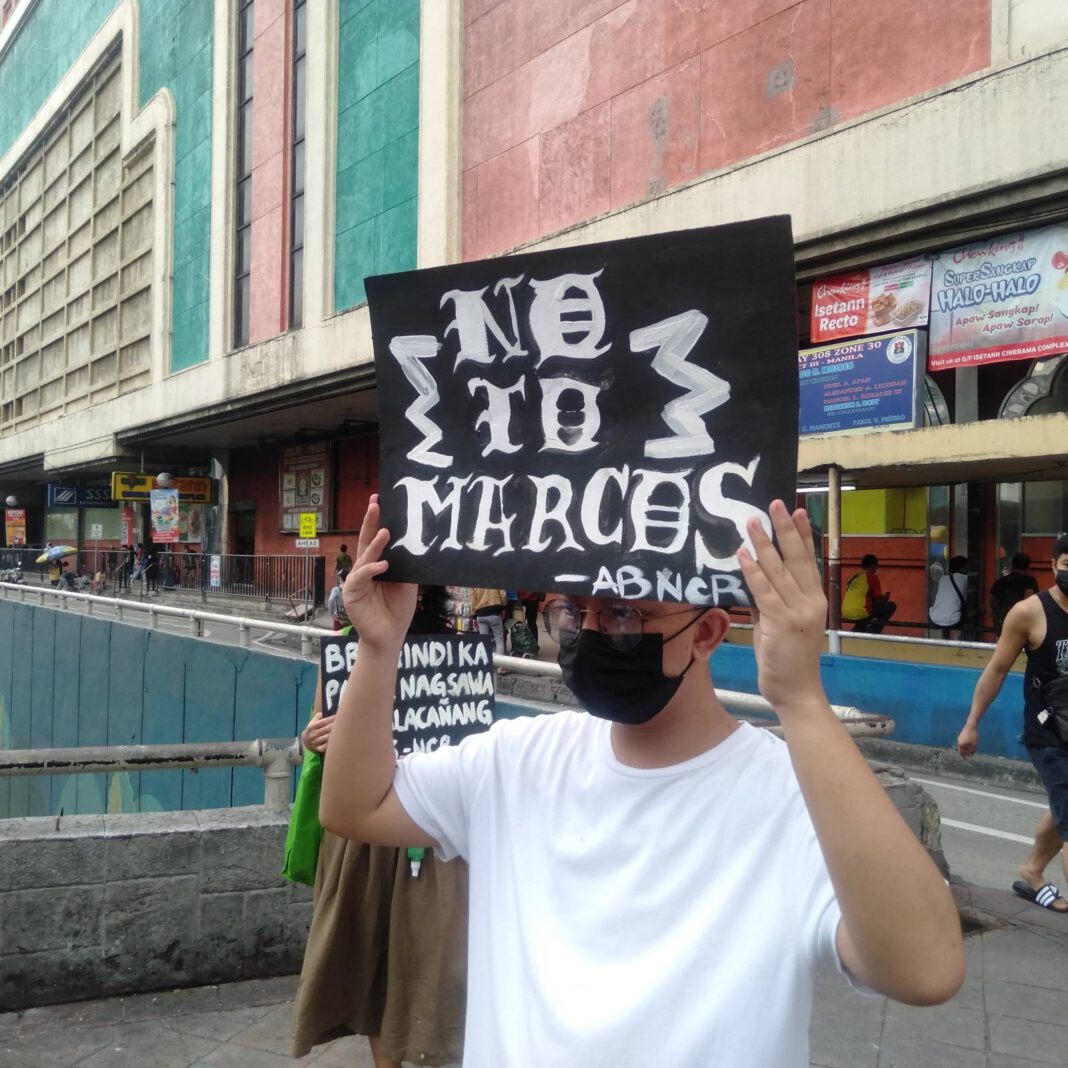 “Marcos-Duterte walang pinag-iba, parehong tuta, diktador, pasista,” is a chant commonly heard in protests. In recent years, groups have likened the current administration of President Rodrigo Duterte to the dictatorship of the late Ferdinand Marcos, Sr. due to similarities in the rampant human rights violations, extrajudicial killings, political persecution, and press freedom encroachments.

With the upcoming May 2022 elections, the Marcos-Duterte tandem is now being closely monitored by various progressive groups, especially how the deadline of filing of candidacy on October 8 might not be the final configuration of those seeking to win the country’s top posts.

On a rainy afternoon of October 4, youth groups held a protest along Recto Avenue in Manila, calling to reject any Duterte-Marcos bid for the presidential and vice-presidential races in the 2022 elections.

While Duterte surprised the public when he announced his retirement in politics two days ago, the groups are skeptical of this announcement, since he also said he would not run for president in 2015, but availed of the rule allowing substitution within the party at the last minute.

Speculations that he was only clearing the way for his daughter Sara Duterte-Carpio to run for the presidential post were rife, despite his daughter having filed her candidacy for another term as mayor of Davao City.

[To continue the dynasties of the Duterte and the Marcoses is to continue the abuses against the Filipino people and fascism in the country.]

Eder also scored how both Marcos and Duterte administrations continue the pattern of subservience to US dictates on the local politics and economy and politicians court the support of the US during the elections. He recalled how the policies they undertook such as the privatization, deregulation, and liberalization of essential industries and public utilities such as oil, energy, water, transportation, and now even hospitals went against the interests of the underserved sectors, the dirt-poor families in the country, despite their pro-poor platforms during the elections.

[The election becomes then a manifestation of how they aim to stay in power but only serve as America’s puppet, serve the interests of the ruling class through abuses and stealing from the country’s coffers.]

Anakbayan Metro Manila organizer Benedict Macabenta said that the ‘dirty politics’ especially in the likes of Marcos and Duterte should no longer be tolerated by the people.

[We don’t need Marcos and Duterte to sit in government to enact changes in the country. What we need for true development is to have national industrialization, genuine land reform, jobs for all. Until there is a politician who can promise and made that happen, the poor in this country will remain poor while the rich will become richer along with the politicians who serve the interests of the rich.]