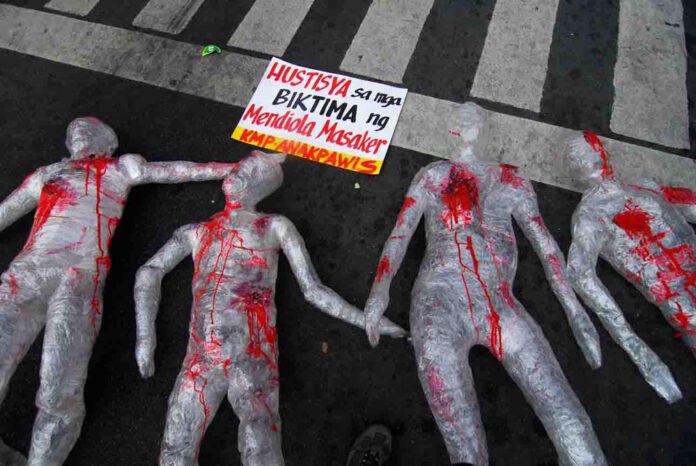 Peter “Tatay Pido” Gonzales Sr., 71, a survivor of the Mendiola Massacre, gets teary-eyed whenever he would remember that dreadful day when 13 of his comrades died after state forces opened fire at their protest march.

Although now aided by a walking stick, Tatay Pido never fails to attend the commemoration of Mendiola Massacre every year.

This year, over 1,300 farmers and members of progressive groups marched from the University of Sto. Tomas (UST) to Mendiola to demand justice for the 13 slain farmers.

The night before, farmers held a vigil and cultural night in front of the Department of Agrarian Reform (DAR). Farmers who joined the the vigil came from areas that are, according to them, “affected by massive land grabbing”:  Bulacan, Pampanga, Batangas, Palawan, Nueva Ecija and Tarlac.

Before marching to UST, the farmers held a short program in front of the residence of President Benigno “Noynoy” Aquino III in Times Street, Quezon City. President Noynoy is the son of late Corazon “Cory” Cojuangco-Aquino who was president when the Mendiola Massacre happened just outside the presidential palace, Malacanang.

Fighting for the same cause

On January 22, 1987, 20,000 farmers marched to Mendiola to demand then President Corazon Aquino to distribute the Cojuangco family-owned Hacienda Luisita and other big landholdings in the country. President Cory brought with her the promise of democracy and social change after the EDSA People Power Revolution in 1986 that toppled the dictatorship of Ferdinand Marcos. But the protest ended with a violent dispersal.

Also known as ‘Black Thursday’ to some, the massacre took the lives of 13 farmers and wounded 105 others. Fifteen protesters were arrested that day.

Like land reform, justice remains elusive for the relatives of the massacre victims.

Teresita Arjona, 57, wife of slain victim Danilo Arjona, narrated she was also present during the massacre. However, she was separated from her husband who was in the frontlines when they were dispersed.

“Matagal nang nagdusa ang aming mga pamilya sa kawalang hustisya. Hindi kami titigil sa paghahanap ng katarungan para sa mga kaanak naming napatay [Our families suffered the lack of justice for a long time. Yet we will not cease to seek justice for our kin who were killed in the massacre],” Arjona said, speaking in behalf of the victims’ families.

Despite the tragedy of the Mendiola Massacre, Arjona and Tatay Pido, both survivors, said they will continue to fight for their rights until their last breath.

Canlas said that farmers continue to demand for genuine agrarian reform to this day.

House Bill 252 or the Genuine Agrarian Reform Bill (GARB), which the farmers claim is the answer to their land woes, is now on its fourth reading in committee level in the House of Representative.

According to Rafael “Ka Paeng” Mariano, former representative of Anakpawis Partylist and chairman of KMP, they expect GARB to undergo one or two more readings. After that, the Committee on Agrarian Reform in Congress would vote and release a committee report for a plenary deliberation to start.

A survivor himself of the Mendiola Massacre, Mariano said that GARB is supported by various organizations of farmers, such as Unyon ng mga Manggagawa sa Agrikultura (UMA), Pambansang Pederasyon ng Kababaihang Magbubukid (AMIHAN), Pambansang Lakas ng Kilusang Mamamalakaya (PAMALAKAYA), among others. GARB seeks to end the monopoly of land by big landlords and foreign and local corporations.

The Comprehensive Agrarian Reform Program Extension with Reforms (CARPER) law expired on June 30, 2014. Mariano said that the continuing landlessness of farmers only proves how CARPER did not truly solve the land problems in the country.