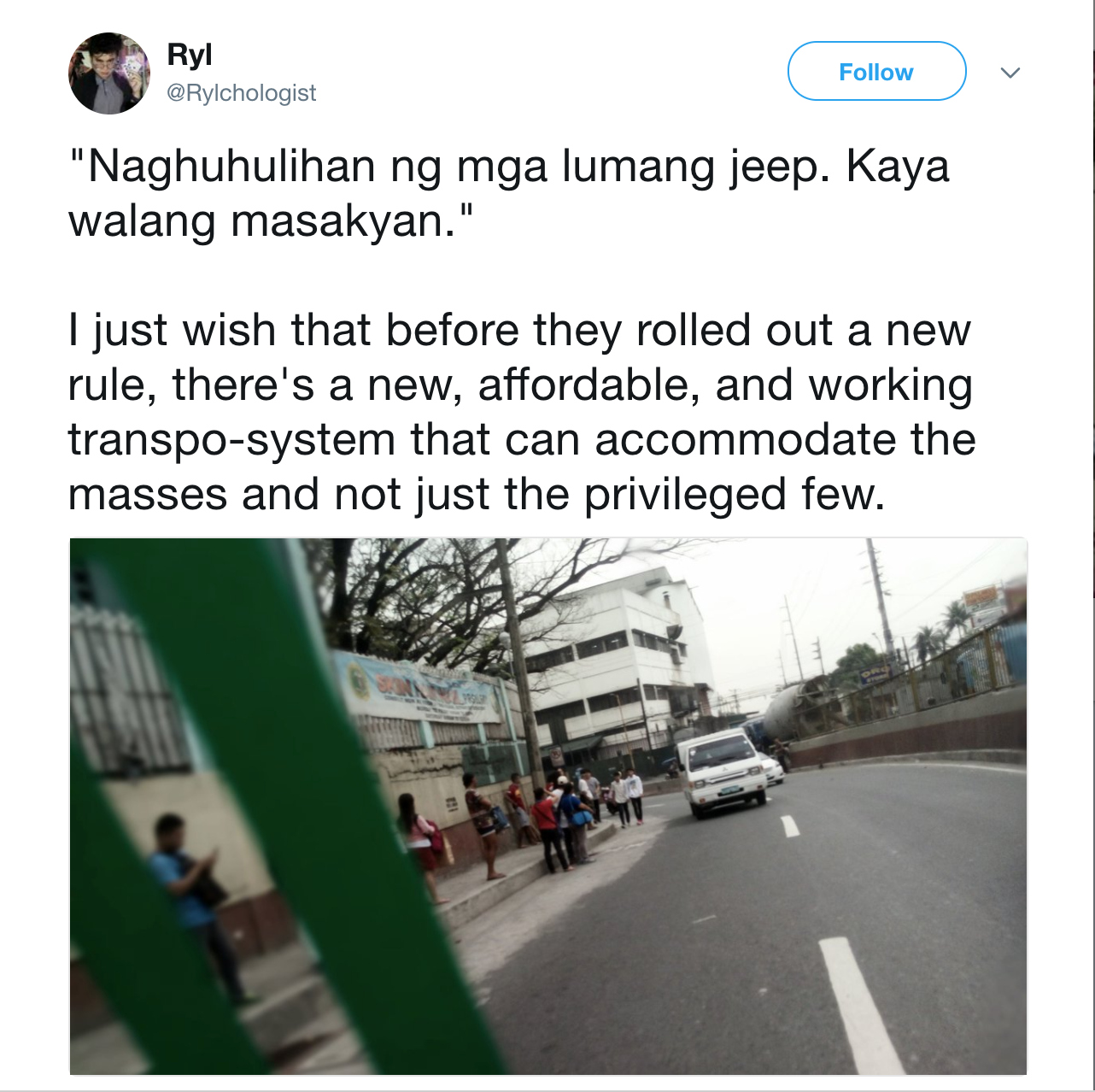 A week after the intensified ‘Tanggal Bulok, Tanggal Usok’ campaign of the Inter-Agency Council on Traffic (I-ACT), dismayed commuters and netizens took to social media to complain #WalangJeep on major thoroughfares in Metro Manila.

Since the implementation of the said campaign, jeepney operators and drivers opted not to operate, which caused massive reports of stranded commuters all over the metropolis.

Over the week, the I-ACT has been consistent in apprehending public utility jeepneys (PUVs) to check the condition of headlights, signal lights, tires, and mufflers, among others. The inter-agency body also started impounding old jeepneys.

Vehicles, which failed the road-worthiness check, were being told to pay fines and attend hearings.

One of the posts on Twitter from @kyungsoobeh blames the I-ACT and apprehending authorities for the lack of PUVs on major roads.

Pinagkaisang Samahan ng mga Tsuper at Operators Nationwide (PISTON) National President George San Mateo sees the ‘Oplan Tanggal Bulok, Tanggal Usok’ campaign as “a prelude and part of the PUV phase-out being implemented by the Duterte government and DOTr Secretary Arthur Tugade to promote its marketing scheme to immediately sell expensive and overpriced electronic jeepneys which the government wants to replace our PUJs with”.

In an interview with Manila Today, San Mateo said that most of the operators and drivers were discouraged to go on with their operations because of the fear of being apprehended by the ‘gestapo-type’ operations of the DOTR. The Gestapo was the German Nazi government’s police force under late dictator Adolf Hitler.

“This campaign of the DOTr and the I-ACT is not only meant to flag down dilapidated and smoke-belching jeepney units, but is meant to look for other offenses for their ultimate objective of phasing-out PUJs across the country,” said San Mateo.

He added, “The DOTr and I-ACT is using this campaign for their money-making scheme based from the order of President Duterte. In many cases, we have been receiving reports that minor offenses like defective signal lights, headlights, taillights and wipers cost poor jeepney drivers up to P5,000 and above while offenses for seatbelts and uniforms amount to P3,000.”

San Mateo also stands along with the netizens and commuters on their analysis that it is indeed the Duterte government’s fault why the public has been experiencing this inconvenience.

PISTON also said that amid the widespread lack of PUVs on streets, the government is still not offering free rides for stranded commuters.

PISTON announced that they are set to hold a transport protest caravan on January 24 at the head office of the LTFRB in Quezon City to slam the ‘Tanggal Bulok, Tanggal Usok’ campaign of the I-ACT.

Below are commuters’ takes on the lack of jeepneys in Metro Manila streets.

Left the house at 7:30, waited for a jeep for 20 mins, in which usually only takes about 2 mins…. then comes a long a "Bacood-Quiapo" jeep, with the driver shouting "Walang quiapo, stop n shop lang, nanghuhuli ng mga bulok na jeep".

i am not supposssssed to be late.
Good job LTO OFFICIALS WALANG JEEP SA RETIRO!