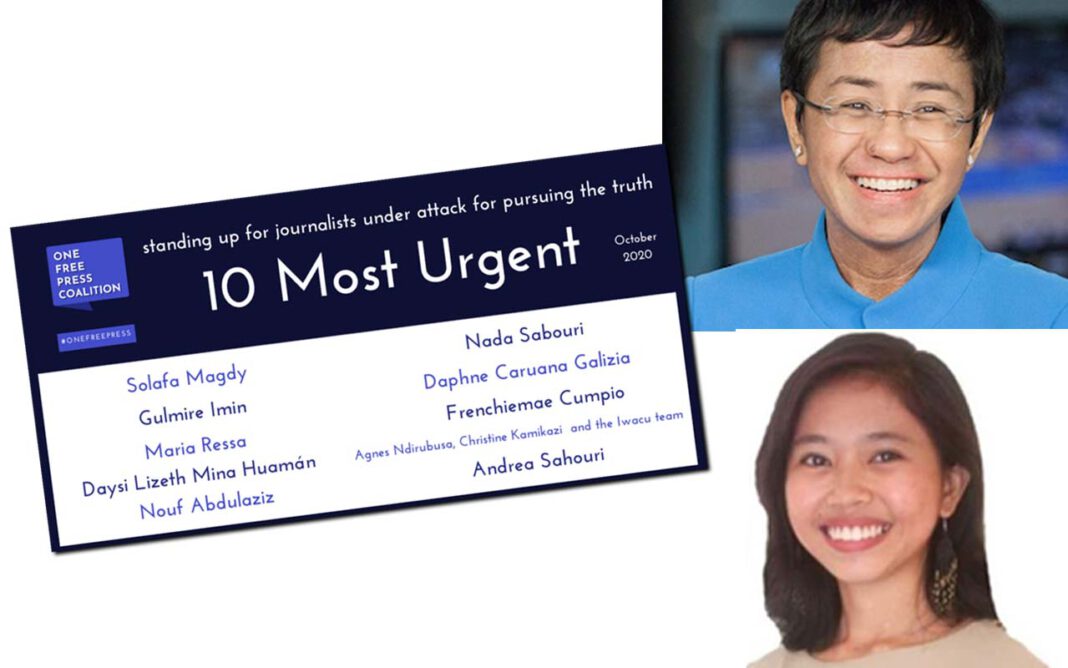 Two Filipino women journalists were listed among “10 most urgent” press freedom cases by a coalition of 38 widely-known international news organizations.

Embattled Rappler CEO Maria Ressa and detained Eastern Vista Executive Director Frenchie Mae Cumpio made it to the list of One Free Press Coalition for the month of October 2020.

The coalition draws up and shares a list each month, highlighting journalists who are incarcerated, under threat or facing injustice, ranked in order of urgency. Ressa ranked second and Cumpio eighth.

On Ressa, the coalition mentioned her legal battles, fighting fines and a six-year sentence for online libel.

“In September, the EU Parliament called on President Rodrigo Duterte to drop all charges against Maria Ressa and a former colleague at Rappler, the privately owned news website she founded. They are convicted of cyber libel stemming from a 2012 Rappler article about a local businessman’s alleged ties to a former judge, who was later impeached for corruption, and purported links to drug and human trafficking rings. On June 15, the Manila Regional Trial Court ordered each journalist to pay $7,950 in fines and moral damages and serve up to six years in jail. Neither will be jailed or required to pay while their appeal is pending,” reported the coalition.

Ressa and Rappler face more than 6 criminal and administrative charges and could face decades of jail time if convicted on these charges. Ressa and Rappler got into the crosshairs, figured in the curse-laden speeches of President Rodrigo Duterte for their reporting on the administration’s war on drugs.

Cumpio, a journalist, radio anchor and community broadcaster based in Tacloban has been detained since February 7, after a police raid via a search warrant was held in Eastern Vista’s office in the wee hours of the morning. Cumpio also served as broadcaster for community radio Radyo Tacloban and radio news anchor at Aksyon Radyo-Tacloban DYVL 819.

“Prior to her arrest, she frequently covered alleged police and military abuses and had recently faced harassment and intimidation from people she believed to be security agents. A court denied Cumpio’s lawyers’ request to drop the charges; they told CPJ they believe the firearms and explosives were planted to justify the illegal arrest,” said the coalition.

The two journalists case reports were linked to those published by the Committee to Protect Journalists.

The top most urgent case is that of journalist Solafa Magdy of Egypt. Magdy’s trial has been repeatedly delayed, at risk of contracting Covid-19 in jail. She has been in pretrial detention since November 2019. Egyptian state prosecutors filed additional charges against her in August, including those accusing her of membership in a terrorist group, spreading false news and misusing social media.

Other journalists in the list include Uighur Gulmire Imin in China, who has served more than 10 years of a life sentence, after she was charged with organizing an illegal demonstration, separatism and leaking state secrets by phone to her husband who lives in Norway. Daysi Lizeth Mina Huamán of Peru has been missing since January 26. Nouf Abdulaziz, a blogger from Saudi Arabia arrested in June 2018 in connection to her reporting on women’s rights as part of wave of arrests of activists pushing for gender equality. Freelance sports reporter Nada Sabouri from Iran began a 3.5-year jail term in August at Tehran’s Evin prison. This month is the third year since the car bomb killing of Daphne Caruana Galizia from Malta. Agnès Ndirubusa, Christine Kamikazi and the Iwacu team from Burundi were covering regional clashes for Iwacu when they were arrested in October, convicted in January of attempting to undermine state security and are serving 2.5 years prison sentence and a $530 fine after their appeal was rejected in June. Andrea Sahouri was pepper-sprayed and arrested by police on May 31, and was charged with failure to disperse and interference with official acts.

The One Free Press Coalition’s members were said to have a combined reach of 1 billion worldwide. It was conceived during a meeting of the International Media Council at the World Economic Forum. Top editors from leading media organizations committed to shine a light on the plight of threatened journalists all over the world.