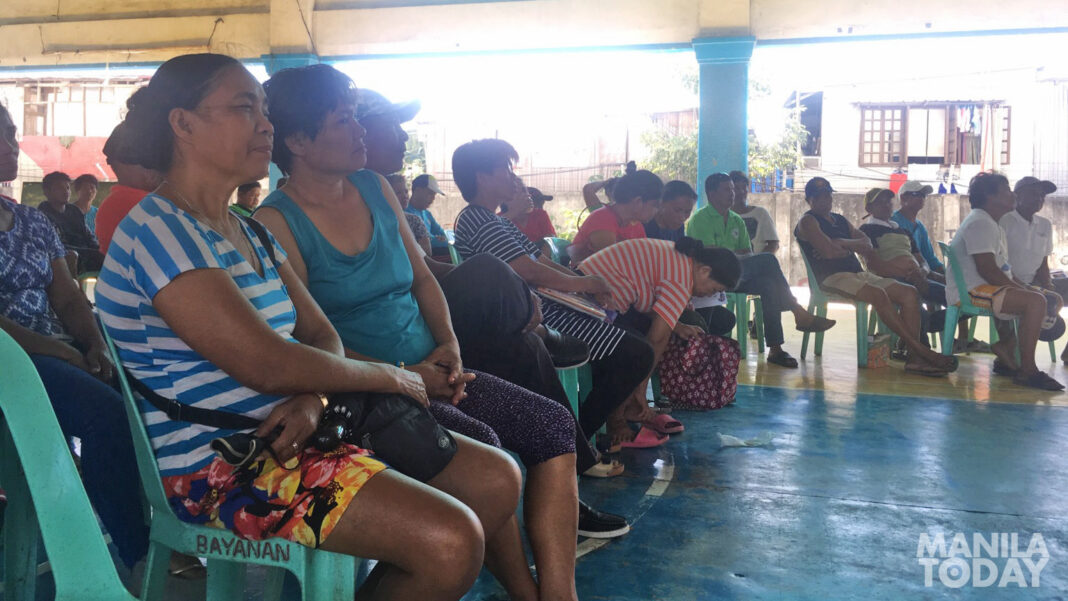 Residents of Barangay Bayanan in Muntinlupa gathered in a reclamation forum in the village this afternoon to learn from Anakpawis Partylist Rep. Ariel Casilao the various reclamation projects of the governments that would affect numerous urban poor communities in Metro Manila. The Save Laguna Lake Movement organized the forum.

Residents here live in the Laguna de Bay area that have been under threat of demolition with-then ‘Public-Private Partnership’ and now ‘Build, Build, Build’ project Laguna Lake Expressway-Dike Project (LLEDP). Fishing is among the common livelihood of residents in the area, while many have turned to informal or service work to augment their incomes due to the dwindling catch in the bay.

Pambansang Lakas ng Kilusang Mamamalakaya ng Pilipinas (PAMALAKAYA) estimated those who will be affected by the LLEDP at 4.9 million fisherfolk and urban poor families in Muntinlupa, Taguig and towns in Laguna and Rizal provinces that surround the 90-thousand ha lake.

The LLEDP has two component projects: a 47-kilometer expressway dike from the cities of Muntinlupa and Taguig to Los Banos, Laguna; and the 700-ha reclamation area for commercial, residential and mixed use.

Fisherfolk, residents and environmentalists opposed the LLEDP due to foreseen environmental damages on the already fragile marine environment and species.

Three of these projects have been approved in principle by the PRA—the 360-ha Pasay reclamation project, the 140-ha Solar City project, and the Navotas Boulevard Business Park. Around 547 hectares of Manila Bay will be reclaimed for ports expansion and mixed-use projects.

The solon also shared with the participants various efforts of Anakpawis Partylist and Makabayan bloc in the Lower House of Congress to oppose “environmentally-destructive reclamation projects” that he said would also lead to loss of homes and livelihoods while earning superprofits for big businessmen. Around 1 to 1.5 million Filipinos would be displaced across all Manila Bay reclamation projects, said Casilao.

The Makabayan bloc filed House Resolution 2452 on January 29, urging the government to postpone the rehabilitation of the polluted Manila Bay over concerns in how the government plans to resettle an estimated 300,000 informal settlers until an assessment on the socio-economic impact on poor sectors and a genuine and democratic masterplan has been carried out.

Rep. Casilao also hit the contract earned by Duterte’s ally Dennis Uy. The solon believed Uy’s fingers dipped in one of the big-ticket Manila Bay reclamation project stinks of crony capitalism or graft. The 265-hectare joint-venture “Pasay Harbor City” would be carried out by a consortium involving Davao-based businessman Uy and the local government of Pasay City.

The lawmaker accused Malacañang Palace of using rehabilitation as a vehicle for reclamation. Aside from environmental damages, the reclamation projects are big profit infrastructure projects for big private corporations that would also build and serve businesses at the expense of the displacement of around 1 to 1.5 million Filipinos across all Manila Bay reclamation projects.

Almost two weeks ago, PAMALAKAYA said the fishing sector is not spared from drought induced by El Niño phenomenon and must be given emergency aid and relief by the Department of Agriculture (DA) and the Bureau of Fisheries and Aquatic Resources (BFAR).

“During dry spell, fish in Laguna de Bay acquires earthy-taste and smell (gilik) because they go deep down the lake, making its farm gate price to drop because consumer demand for any kind of fish harvested during this season is very low. This reduces further whatever income small fishers can bring home to their families,” Ronnel Arambulo, coordinator of PAMALAKAYA in Laguna de Bay explained.