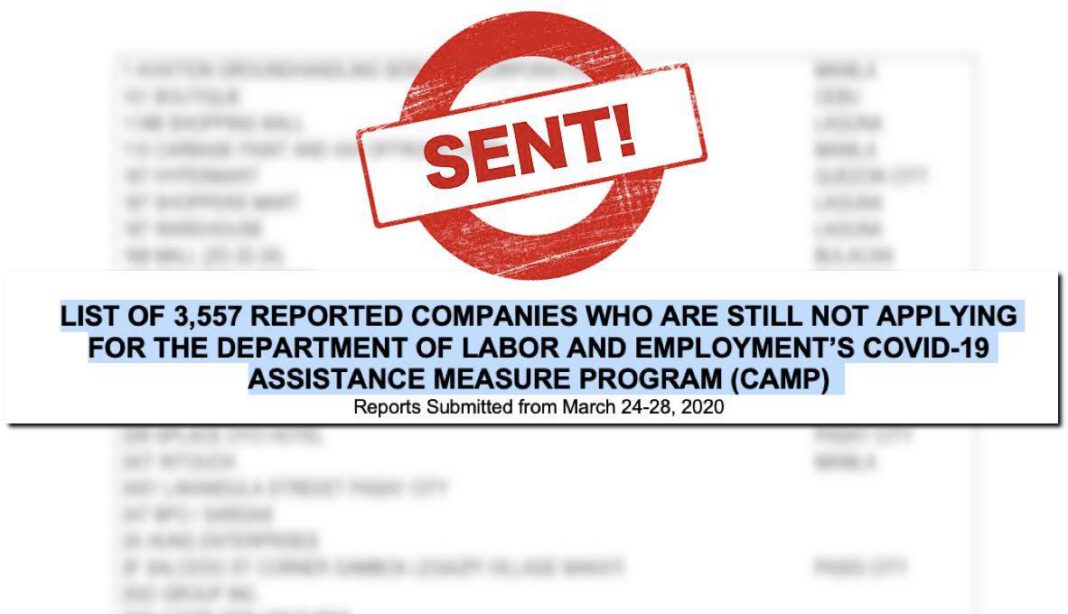 Labor group Defend Jobs Philippines today called for transparency from the Department of Labor and Employment (DOLE) over its ongoing implementation of the COVID-19 Assistance Measure Program (CAMP).

The group wants the Labor agency to report back to the people the total cash disbursements and the figures of the actual beneficiaries of the program.

“As of March 31, our field monitoring already recorded more than 630,000 workers displaced either by reason of temporary closure or flexible work arrangements as reported by 15,213 establishments,” DOLE Secretary Silvestre Bello III said.

The DOLE required employers or establishments to submit two requirements to avail of CAMP: (1) report on the COVID-19‘s impact on their businesses and (2) company payroll for the month prior to the implementation of flexible work arrangement or temporary closure.

The DOLE has so far distributed P160 million.

Bello said, “we are accelerating the release of assistance to all those affected.”

The group also wanted to monitor private employers who are continuously disregarding their workers in this time of crisis.

“We ask Labor Secretary Silvestre Bello III if DOLE can provide our awaiting workers of a running list of pending CAMP application processes of employers that will determine whose applications have been approved or denied. We wish to see these updates posted on any of DOLE’s social media platforms immediately,” said Thadeus Ifurung, Defend Jobs Philippines spokesperson.

The group submitted online to DOLE a list of some 3,557 private companies from all over the country who are not yet applying for CAMP for the benefit of their workers. The submitted list came from the almost 16,432 online complaints received by the group from March 24-28 in their ongoing COVID-19 Labor Monitor campaign.

The group said the needs, even the suffering, of the workers’ families would continue add up for as long as the government has not extended them aid as the total lockdown that took away their jobs or livelihood and income draws to its end on April 14.