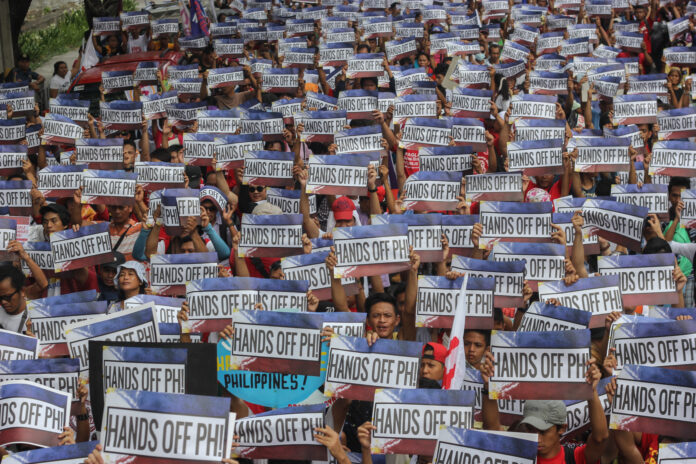 P1NAS to US, China: HANDS OFF!

“Atin ang Pinas! China at U.S. layas! (The Philippines is ours! China and U.S. get out)” several groups chanted as they rallied outside the Chinese and U.S. embassies on June 12, the national celebration of the Philippine Independence day.

Hundreds of activists, led by P1NAS (Pilipinong Nagkakaisa para sa Soberanya), carried placards and banners to demand the two superpowers—U.S and China—out of the Philippines amid dispute at the South China Sea.

“While we assert that there must be peaceful resolution of this dispute, we will not allow ourselves to be cowed into submission,” Bayan Muna Partylist Representative Neri Colmenares said during his speech outside the Chinese embassy.

China claims almost the entire South China Sea, where a $5 trillion ship-borne passes every year. China defends its claims on the disputed sea through its so-called nine-dash line.

The nine-dashed line, originally an eleven-dashed line, refers to the demarcation line on a map published by the Kuomintang government of the Republic of China in December 1947 to justify its claims in the South China Sea.

The Philippines has already filed an arbitration case against China under the United Nations Convention on the Law of the Sea (UNCLOS).

Former senator Rene Saguisag expressed support to defend Philippine independence and sovereignty against the two superpowers. Saguisag was one of the 12 senators in a historical vote in 1991 to remove the U.S. military bases from the country.

Artists including Bibeth Orteza and Mae Paner, also known as Juana Change, were also present in the event. Paner wore a headdress depicting a paper mâché version of the BRP Sierra Madre, a rusty ship used by the U.S. during the World War II and was handed to the Philippines.

BRP Sierra Madre is located in the disputed South China Sea, and serves as home for Filipino marines protecting the Philippine territories.

Orteza recited a manifesto of P1NAS, vowing to defend the Philippine sovereignty.

“Walang ibang magtatanggol sa soberanya ng Pilipinas kundi mga Pilipino. Kapag tayo’y sama-sama, anuman ang pagsubok, tayo’y magtatagumpay (No one will defend the sovereignty of the Philippines but the Filipinos. If we are united, whatever the challenges we face, we will overcome),” the manifesto continues.

Orteza, Colmenares and Saguisag are the conveners of the newly-formed patriotic movement P1NAS. The movement vows to use “people’s diplomacy to thwart the two most immediate threats to Philippine sovereignty – Chinese expansionism and U.S. interventionism.”

After the program at the Chinese embassy in Makati, activists headed to the U.S. embassy in Manila to protest U.S. military presence in the county.

“The U.S. is merely asking one thing, to have its freedom of navigation in the seas, in defense of its economic and military interests,” said Colmenares.

The U.S. has been going around Asian countries as part of its pivot and rebalancing to Asia. The Philippine government is also seeking help from the U.S. in dealing with the South China Sea dispute.

Several police were deployed in both embassies, blocking the activists. The progressive groups sang patriotic songs, including the Philippine National Anthem “Lupang Hinirang” during their program.

They criticized the decades-long reliance of the Philippine government to foreign powers.

Reyes said bigger mobilizations against superpowers U.S. and China are to be expected in the coming weeks, as progressive groups continue to fight for national sovereignty.