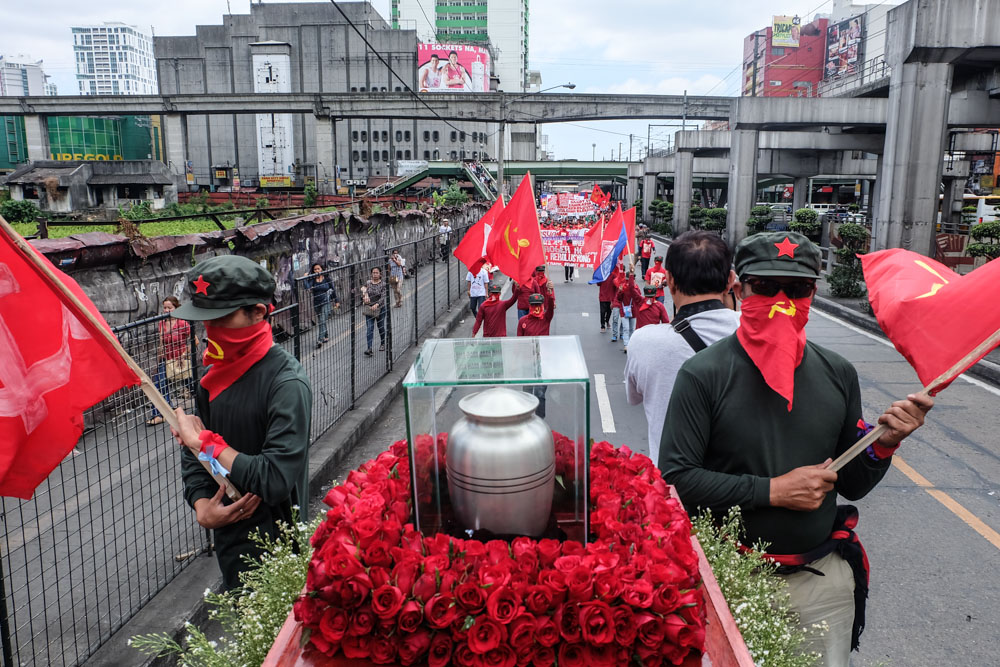 The march was slow—it was a funeral march after all. The summer heat was grueling, offering only a few occasional shades throughout the almost three-hour walk.

The part of the metro where the march passed seemed to slow down. Or they did slow down. Vehicles on the other side of the road slowed down to watch, no more in a hurry to get to the next traffic light, or maybe hurry only until after their passengers have taken stock of what they had just come across. Pedestrians stopped and took photos and videos. Some stood still and waited to be handed out the flyers that were being given away, thirsting for more information on the unfolding scene perhaps. Vendors and other bystanders stayed at their chosen posts to witness the rally. Traffic enforcers and policemen on the street stood fixed at their spots, gawked at the rally and let it pass, until some of them realized they might need to direct traffic flow. There was no ballyhoo all around, except for traffic getting heavy in some parts and people remaining where they are in the streets. Everywhere the march passed seemed to be more quiet than the usual. It was as if the metro agreed to be solemn.

One of their chants went, Sagot sa kahirapan, digmang bayan! It was a call typically seen and immensely felt by the people during the worst years of contemporary history, Martial Law. One of their main banners said, Sagot sa kahirapan: rebolusyon, hindi eleksyon! It was a response to an election frenzy that has just completely rolled out, with the start of local campaign the day before.

It was all a reminder of a continuing revolution in the countryside.

Revolutionary groups belonging to the NDF marched through EDSA from Cubao to deliver the urn of the ashes of Gregorio “Ka Roger” Rosal to a tribute program in the University of the Philippines Diliman Theater. Rosal served as Communist Party of the Philippines spokesperson from 1994 until his death in June 2011. He was spokesperson of the Melito Glor command of the New People’s Army (NPA) prior to his last assignment.

They were joined by supporters of Ka Roger from progressive groups BAYAN Southern Tagalog and Metro Manila who recognized the departed revolutionary leader’s dedication to uplift the plight of the Filipino people.

Rosal was given tribute prior the interment of his ashes in his final resting place, the cemetery in his birthplace Ibaan, Batangas where the remains of his granddaughter baby Diona Andrea was also buried.

The NPA celebrated 47 years on March 29, as the Philippines remained the home of the longest-running communist revolt in Asia. The armed wing of the CPP was founded a few years before Martial Law and helped toppled the dictatorship. Counter-insurgency programs of the Philippine government and its armed forces declared the death of the CPP and NPA on numerous occasions. But the CPP, its united front the NDF, and its army the NPA remain the biggest threat to the Philippine government, as they continue to strengthen their own government in the countryside.