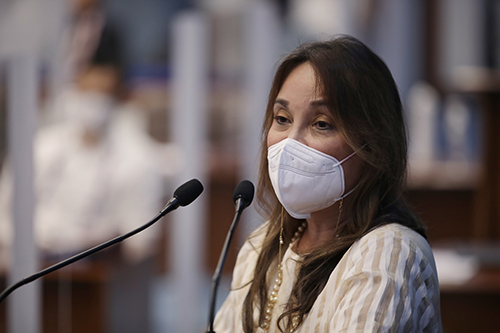 “Believing in an ideology which may be different from the majority, in layman’s term believing in philosophies that may left-center so to speak, does not make anyone subversive,” said Senator Loren Legarda in her privilege speech during a plenary session last August 23.

Tolentino referred to this instance after activist poet Adora Faye De Vera, a sister to Commission on Higher Education Prospero De Vera, was arrested and charged with multiple murder raps even tagged being a high-ranking officer of the Communist Party of the Philippines (CPP).

“I think it is right that when one enters the government to perhaps declare that you have a relative who is a member of a terrorist organization or criminal syndicate up to the fourth degree of consanguinity,” Tolentino said.

However, commissioner De Vera has drifted himself in any possible connection to his sister saying that he does not share the same views nor support Adora in her actions. Even making a pronouncement of support to Marcos Jr.’s administration in continuing counter-insurgency efforts.

What actions of Adora did commissioner De Vera perhaps shy away from if not totally disregard would be about her vocal stance as a Martial law survivor continuously fighting and struggling for justice and human rights, affirmed by rights advocates.

Sen. Legarda hoped for the resumption of peace talks between the Philippine government (GRP) to National Democratic Front (NDF) in which pertinent issues relating to socio-economic problems and the roots of armed conflict be discussed.

“I hope that the peace talks can be revived with the common goal of leaders of our country, whether we are elected in the Senate, or even working with a grassroots organization deemed subversive or Left by the government, but not really proven, can work together towards more equity, peace and authentic real reforms in the countryside,

It must be noted that Legarda has been a long-time advocate for peace talks.

“If we see and study what they actually believe and want, it is social justice. It is really uplifting our people from poverty for decades without bearing arms,” she said, explaining that there is neither an existing law nor pronouncements from the government that has stated the CPP-NDFP are enemies of the state.

Legarda even mentioned that she was not ashamed of maintaining good working relations with the NDFP.

Just April this year, she also called for the resumption of peace negotiations and stressed that the Comprehensive Agreement on Social and Economic Reforms (CASER) as one of its fundamental components that GRP and NDFP should closely deliberate for concrete and doable steps toward liberating Filipino people from poverty, exploitation, and underdevelopment.

“I would not pass judgement and label certain organizations whose beliefs may be different from the general majority… When we look at it, we bear similar objectives, visions, dreams for our people,” Legarda noted.

In her privilege speech, Legarda also called the government to review the controversial Anti-Terrorism Act (ATA) of 2020.

“Having said that, Mr. President, I would like the Anti-Terror Law to be reviewed. I recall and I hope my vote was recorded correctly when I was in the House of Representatives at the time of the pandemic, because I did not vote in its favor,” she added.

“These misconceptions brought upon by the Anti-Terrorism have only led to red-tagging that resulted in the illegal arrests and murders of countless human rights advocates and bystanders alike even before the Duterte administration. We must collectively demand the stop the perpetuation of this culture of impunity that endangers the lives of concerned citizens and demand transparency and accountability from government officials made to ensure public safety,” BAYAN NCR said in a statement.

During these trying times, BAYAN-NCR noted that the Filipino people need a fair and humanitarian government that ensures truth, justice, and peace through good governance.

“The Filipino masses of workers, farmers, and urban poor especially is deserving of a government that heeds their call for wage increase and land distribution as well as job security, food, security, and housing security—regardless of differing political views. Let us put a stop to red-tagging and support peace talks,” they added.

Karapatan National Capital Region seconded and further called for the release of political prisoners which also included peace consultants that in the first place should be protected in accordance with the Joint Agreement on Safety and Immunity Guarantees (JASIG) as signed by both parties between GRP and NDFP.

Last September 1 is the 30th anniversary of the signing of The Hague Joint Declaration as the framework containing four-point agendas to resolve armed conflict and establish peace negotiations between the GRP-NDFP.