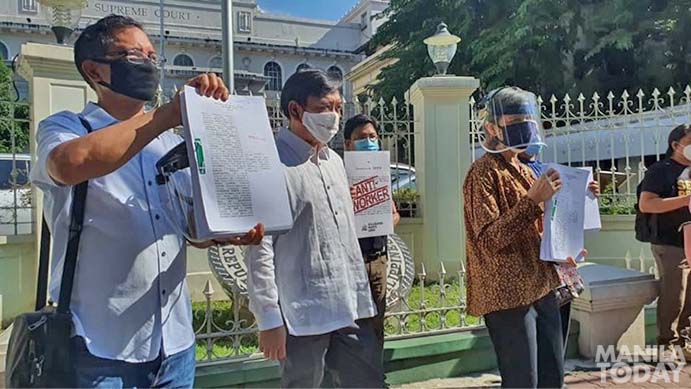 They are among the 44 civil libertarians, human rights defenders, academics, government workers, and activists who are asking for the nullification of the law in its entirety. Their counsel is the National Union of Peoples’ Lawyers (NUPL).

The petition was also filed through e-filing on July 19.

Today is the first day since the Supreme Court along Padre Faura re-opened after its schedule for disinfection, cleaning, and sanitation. Chief Justice Diosdado Peralta announced on July 17 the closure from July 20 to 22.

Department of Justice Secretary Menardo Guevarra said that the law took effect on July 18 midnight, sans the implementing rules and regulations and printed publication of the law on the Official Gazette or at least two newspaper in general circulation.

“Much has already been said about the multifarious provisions of the so-called Anti-Terror Law that violate a litany of rights and run frontally afoul of the Constitution and basic legal principles,” NUPL said in its statement on the filing of the petition.

Apart from much-contested provisions such as the extended warrantless detention of 14 to 24 days, NUPL said there are insidious provisions lurking among major sections.

These include  ‘the expansive meaning of “material support” to include expert advise and assistance; the restrictive criterion for allowing humanitarian aid; the institutionalization of uncounselled hostile interrogations embedded in the requirement of keeping a logbook; the intimidating application of the law to millions of OFWs and migrants all over the world through its very, very long arms, eyes and ears beyond our disputed shores; and the potential compounding of the prolonged periods of detention without judicial warrant and without charges by serializing them indefinitely.’

The group lamented that despite the seriousness of the protests and petitions against the Anti-Terrorism Act of 2020 that President Rodrigo Duterte signed on July 3, these were met with “inane, fallacious and tangential” arguments”, such as:

Many of these statements were shared by the law’s principal sponsors in the Senate, Senator Panfilo Lacson, Sr. and Senate President Vicente ‘Tito’ Sotto III.

The statement “Kapag napasa natin ito, di na natin kelangan ng Martial Law” (if these will be passed, we would no longer need Martial Law) was said on separate occasions by Sotto and National Security Adviser Hermogenes Esperon, Jr.