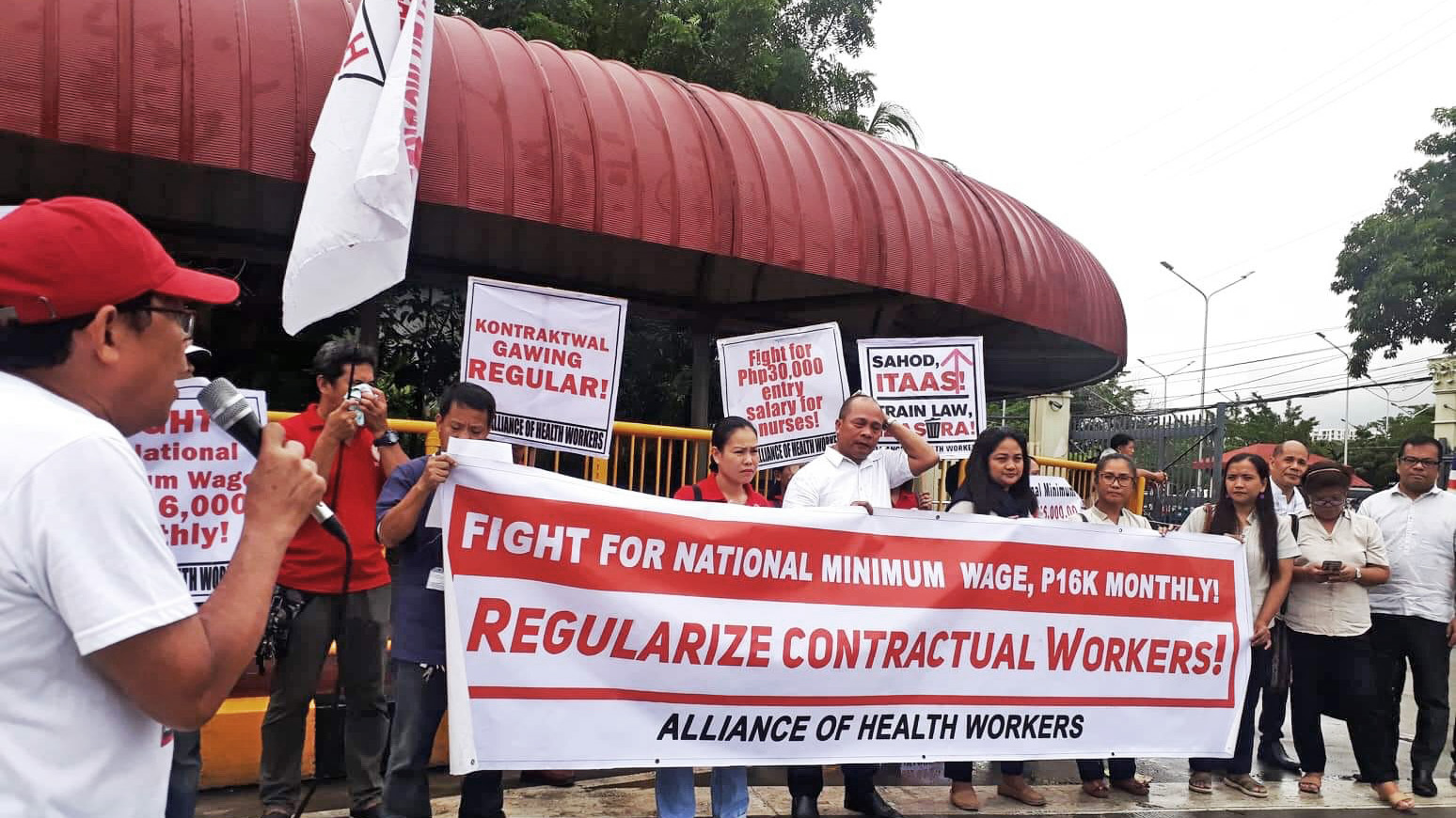 Government workers from Confederation for Unity, Recognition and Advancement of Government Employees (COURAGE), Alliance of Concerned Teachers (ACT) Philippines and the Alliance of Health Workers held a picket protest in front of the Senate gates today before attending the public hearing on salary increase and other benefits called by the Senate Committee on Civil Service, Government Reorganization and Professional Regulation.

The groups, converging in the All Government Employees (GE) Unity, said they are taking their fight for pay hike to the Senate after the ‘hasty and sly approval of the 2020 budget by the appropriations committee of the Lower House.’

Salary Grade 1 employee only receives P11,068 monthly while entry-level teachers and nurses get a monthly salary of P20,754.

As per Local Budget Circular 118 of the Department of Budget and Management (DBM), local government Salary Grade 1 employees only receive P7,194 to P10,515 monthly except for special cities and 1st class provinces and cities.

The group lamented that the current government workers salary have fallen behind the cost of living.

According to Ibon Foundation, the family living wage today amounts to P26,104, while NEDA’s declared cost of decent living is P42,000 monthly.

Public sector education workers from the Alliance of Concerned Teachers (ACT) Philippines raised that the proposed 2020 national budget only allotted a ‘measly’ P31-billion pay hike budget for 1.5 million government employees, with more than half of those belonging to public school teachers.

The group also slammed the ‘institutionalizing manpower agency hiring instead of regularizing contractual government through the DBM, Civil Service Commission (CSC) and Commission on Audit (COA) Joint Circular No. 1 series of 2018’ that prohibits the direct hiring of contractual employees by government agencies starting January 2021.

The Alliance of Health Workers pointed out that the 2020 proposed budget of the Department of Budget and Management, which the committee approved in toto contained various problematic provisions as it prioritized ‘questionable infrastructure projects and the regime’s wars over welfare and services.”

The Department of National Defense (DND) is set to receive P188.6 billion in regular funds and P69.7 billion allotted for pensions and gratuity funds for retirees of the Armed Forces of the Philippines (AFP) and war veterans.

The General Provisions of the National Expenditure Program (NEP) submitted by the DBM define intelligence expenses as those related to intelligence information-gathering activities of uniformed and military personnel, and intelligence practitioners that have direct impact to national security. The NEP became the basis of the General Appropriations Bill (GAB).

The Lower House appropriations panel on Monday approved its committee report on House Bill 4228 or the 2020 GAB, proposing a national budget of P4.1 trillion for 2020.

“According to the House Appropriations committee chair, the Php4.1 Trillion proposed spending program was endorsed unanimously by the executive house body following a closed-door meeting held on September 9,” said All GE Unity in its statement to the media.

Committee chair Isidro Ungab said the executive session is the traditional procedure of the committee.

The House will proceed to the budget debates at the plenary on September 10, a day after the committee report approval.

The House is targeting to approve the 2020 GAB on final reading by October 4, before Congress goes on a month-long recess.