The fish ban will allegedly stop big operators from depleting our fish stock. Further, it is touted as an environment-friendly legislation to restore our polluted seas.

In Manila, the proposed privatization of 22 public markets aims to modernize the city infrastructure by tapping the support of the corporate sector. Local officials insist that it is more accurate to call the market ordinance as ‘joint venture’ rather than privatization because the government is not selling any public property to prospective investors. The claim is ludicrous because the joint venture as a variant of the build-operate-transfer scheme is essentially a privatization program.

In Quezon City, the Balintawak market demolition is presented as a public welfare ser
vice to protect consumers against unsafe food and unsanitary commercial establishments. The threat of demolition is also reported to be a penalty against the market owners for tax evasion.

The sectors affected by these laws and programs have loudly protested in recent weeks. Fish operators and their workers have declared a ‘fish holiday’ aside from gathering in Mendiola, Luneta, and in front of the Senate. Meanwhile, Manila market stall owners organized a ‘market holiday’ against the planned privatization. They succeeded in persuading the local government to conduct a dialogue and a series of consultations with market officials and other stakeholders.

According to the government and some NGOs, only the big commercial operators will be covered by the fish ban but the nationwide protests showed that the law will displace ordinary fisherfolk and their families.

The Manila vendors’ march was supported by several parishes, homeowners’ associations, and community organizations which disputed the allegation of the local government that opposition politicians are leading the campaign.

The fish ban and market demolition must then be named for what they really are: bureaucratic political acts aimed at removing the small and middle economic players in favor of big and transnational corporate interests. 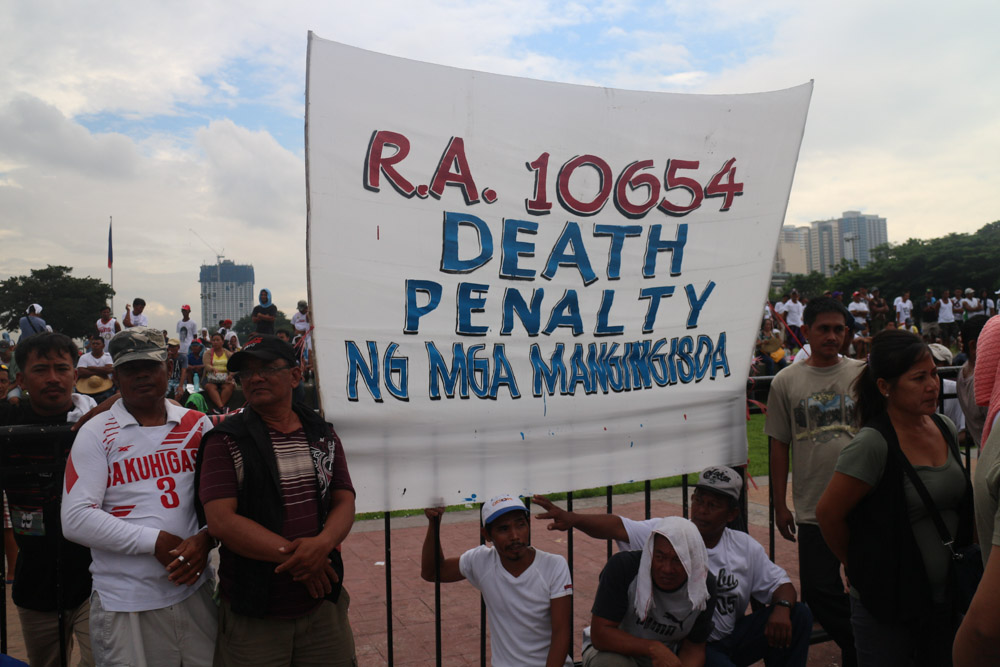 The protesters are right to argue that the government is pursuing reforms that will instantly eliminate the jobs and livelihood of thousands of small workers, shopkeepers, and fishers.

The fish ban and market demolition must then be named for what they really are: bureaucratic political acts aimed at removing the small and middle economic players in favor of big and transnational corporate interests.

When the European Union downgraded the trade rating of the Philippines, we panicked and quickly amended the fisheries code so that we can continue exporting our products and earn more Euros. We ignored the unacknowledged fact that the EU was simply protecting its own fish industry. And what is more tragic is that we uncritically accommodated the EU at the expense of our domestic fishers. (Traydor! Punyeta!)

We are prioritizing fish export instead of boosting our food security.

It is not difficult to ascertain how the fish ban will destroy the primary economic activity in our coastal villages. The government is forcing small fishers to compete with big fishing vessels in the open seas. We are prioritizing fish export instead of boosting our food security.

Environment protection is everybody’s concern but it should be accompanied by a comprehensive understanding of the socio-economic context. When we demand the preservation of our marine resources, it should include an analysis of the political and economic conditions. Protect the municipal waters, but for whom? Ban commercial fishing, but for whom?

Every year, the government has been consistent in pointing out that fishers are the poorest of the poor in the Philippines. But it seems determined to make the lives of fishers more destitute by criminalizing their livelihood. Now we know that the enemy of our fisherfolk is not just the oversized quasi-military fishing vessels from China but also our own government.

In the case of Manila, it wanted to modernize the public markets by demolishing these old but valuable structures and replace them with mini-malls or supermarkets. If Manila is interested in demolishing something, it should begin with the ugly Torre de Manila. Modernizing public markets is necessary but it should not dislodge our struggling entrepreneurs.

Is modernization the real goal or is it simply a money-making scheme of politicians and their campaign donors? Does Manila truly lack the financial capability to build and rebuild its markets or is the problem an issue of misplaced priorities?

The Manila market modernization is a localized version of the Public-Private-Partnership (PPP) of the national government.

The Manila market modernization is a localized version of the Public-Private-Partnership (PPP) of the national government. It is hailed as an innovative program but it is merely a fancy name for privatization. It hides the sinister intention of spreading the tentacles of big business in the last remaining spaces available for small and medium producers and entrepreneurs.

For greedy capitalists and smugglers, it is not enough that the palengke must be undermined by surrounding it with malls and supermarkets in town centers. The palengke as we know it must go.

The looming demolition of markets in Manila symbolizes the systematic assault on our local economy.

In the past three decades, we embraced trade liberalization even if it destroyed the backbone of our domestic manufacturing and agricultural sectors. Markets were flooded with cheap goods from other countries instead of locally-made products after the government removed trade protection measures.

Balintawak, the grand bagsakan of agricultural products from the North, is perhaps the most popular link between the rural and urban. If demolished, it will disrupt the supply chain which could force other markets in Metro Manila to procure from big traders and smugglers. If transformed into a mall, it means the big business retailer can dictate the prices of goods which could mean smaller profits for independent suppliers and entrepreneurs. Worse, the mall owner can bankrupt local producers by sourcing supplies from other countries.

These are precarious times for small local businesses. We have a callous government bent on serving the needs of big business and foreign companies. It’s bad enough that we have poor infrastructures, high electricity rates, inefficient transport system, and corrupt bureaucracy. Instead of addressing these issues, the government is aggravating the situation by preventing our people from earning a decent living. Its economic doctrine is unabashedly anti-poor and anti-Filipino: Ban fishing, demolish markets. Damn local production, promote lopsided foreign trade.

Policies are “business-friendly” even if these are highly discriminatory against the people, especially the poor. We praise tycoons even if their businesses have weak links to our domestic economy or even if they destroy our environment. They thrive by hiring contractual labor and bribing our politicians. Development is equated with business profit even if workers are subjected to wage slavery. Progress is measured by counting large-scale infrastructures such as the Laguna Lake Expressway Dike and Manila Bay reclamation even if these will uproot residents and fishers from their homes.

A business magazine once featured a car company for the successful sale of an old Japanese SUV brand. It’s heartbreaking because the Philippine car industry exists by marketing the products of another country.

Meanwhile, the genuine local producers are burdened with onerous policies and unjust impositions. Fishers simply want to sell their goods in our local markets and vendors simply want to do business in our cities. But the government is blindly following neoliberal trade prescriptions. Perhaps small producers who are displaced by global competition and economic adjustments can apply for assistance through the conditional cash transfer program. Our people wanted to work with dignity but they are being forced to beg for cash.

Greater tragedies await as we open our country to foreigners who will attend the Asia-Pacific Economic Cooperation summit in November. It is more than a talk event since it will reinforce the economic policies that downgraded our capabilities to produce and develop our own industries. During the APEC summit, think not of foreign dignitaries, Filipino hospitality, and insincere praises for Daang Matuwid. Ignore also deceptive spins such as inclusive growth, transparent governance, and sustainable development. Instead, think of the fisher who can’t fish in our waters, the vendor evicted from a public market, and the farmer who is unable to sell his produce while imported goods flood the country.