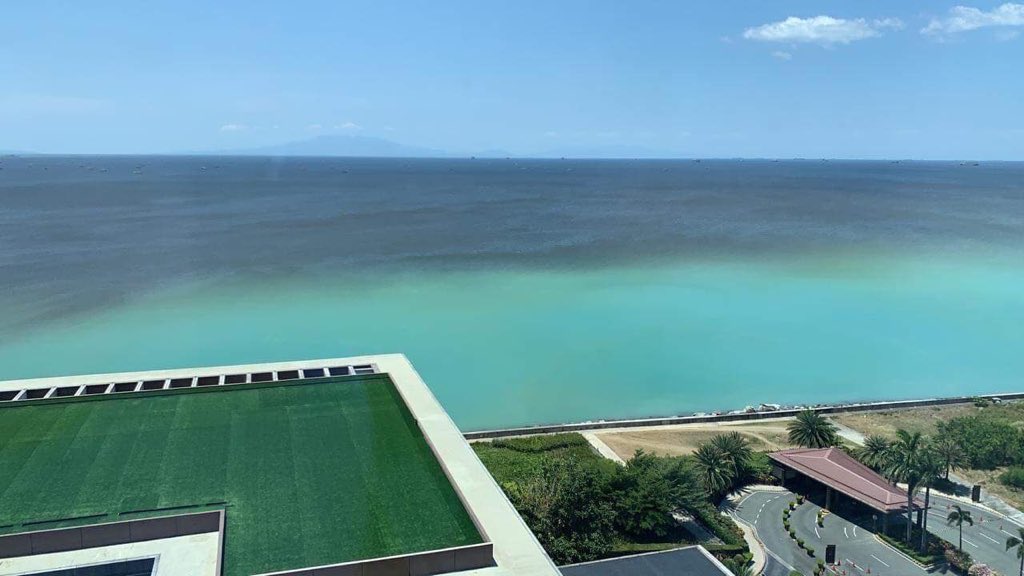 Photos of the now-turquoise waters of Manila Bay circulated online on March 26. Some celebrated this as a sign of the polluted bay healing while the whole mainland Luzon is under total lockdown. Some lauded this as the “positive” aspect of the COVID-19 spread.

“The [Department of Environment and Natural Resources (DENR)] should get to the bottom of this. In case, on whatever establishment or entity responsible for a possible pollution discharge should be held accountable over violation of the government’s very own rehabilitation drive of Manila Bay,” said the group in a statement on March 27.

The fisherfolk group raised fear that pollutant materials by an establishment were dumped into the Manila Bay, as the discoloration was same with the chlorination of swimming pools, which the group said could be lethally hazardous to the marine environment resulting to ecological disturbance such as fish kill.

A media report showed a video and quote about this development from DENR Undersecretaty Benny Antiporda.

Some netizens commented on posts of the photos of Manila Bay that the bay is not healing and may be suffering from harmful algal bloom.

PAMALAKAYA has ruled out the possibility that it was algal bloom, as the water was clear and did not show any indication of an algae.

“The color of the water can be likened to a swimming pool that underwent chlorination; thus, we can’t set aside a possibility that some establishment carried out tank cleaning and outrightly discharged the toxic cleaning chemicals into Manila Bay,” said Jerwin Baure, PAMALAKAYA resident fisheries expert.

Baure said the ‘healing’ or rehabilitation of Manila Bay will take years and cannot happen in a matter of days during the lockdown.

Metro Manila was placed under community quarantine on March 15 and then upgraded to total lockdown on the whole Luzon on March 17.

“This abrupt change in color of Manila Bay does not seem natural and should not be attributed to the enhanced community quarantine. Whether this could be attributed to the discharge of chemical effluents or harmful algal blooms caused by warm temperature, the recent event could lead to far worse consequences opposite to ‘self-healing’. For a eutrophic yet polluted body of water like Manila Bay, marine rehabilitation will take years and won’t happen drastically over a period of a lockdown,” explained Baure.

Baure is a fisheries graduate in University of the Philippines Visayas.

The Philippine Coast Guard said in a media interview that the color of the water also undergo discoloration if there were pollutants, according to previous reports of their Marine Environmental Protection Command. The water may have changed in color due to the chlorine in pool water discharged in Manila Bay for example, said the attached agency of the Department of Transportation. The Philippine Coast Guard is an armed and uniformed service tasked primarily with enforcing laws within Philippine waters.