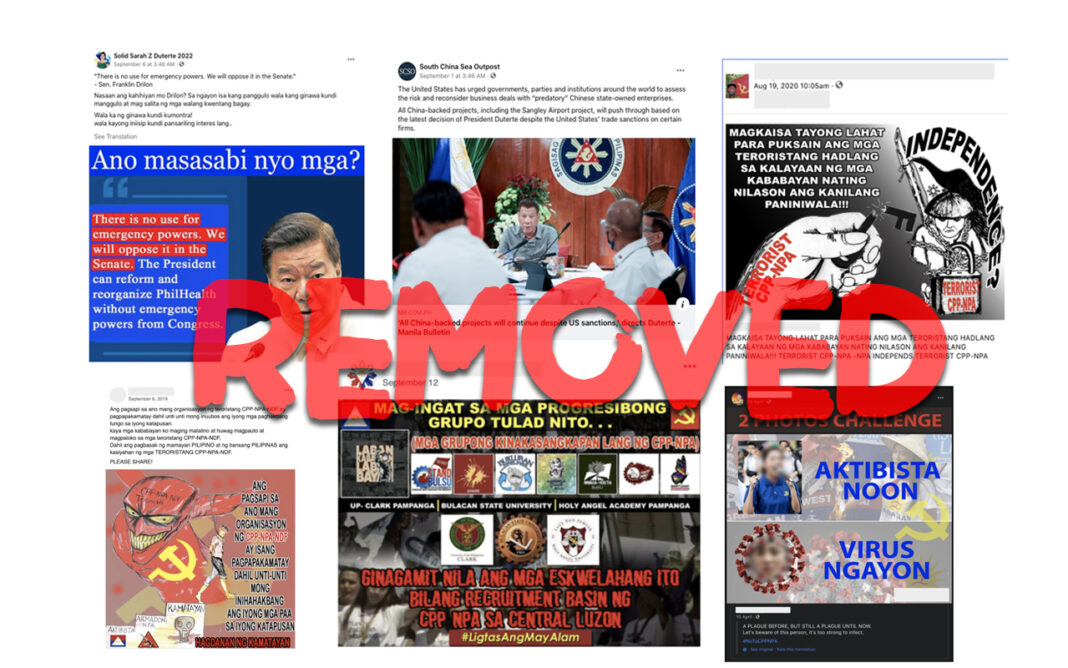 On September 22, Facebook announced that it took down two separate networks for violating the company’s policy for coordinated inauthentic behavior, one originating in China and the other in the Philippines, but both networks sharing content supportive of President Rodrigo Duterte and red-tagging, vilification against government critics.

Nathaniel Gleicher, Facebook Head of Security Policy shared in the report: “In each case, the people behind this activity coordinated with one another and used fake accounts as a central part of their operations to mislead people about who they are and what they are doing, and that was the basis for our action. When we investigate and remove these operations, we focus on behavior rather than content, no matter who’s behind them, what they post, or whether they’re foreign or domestic.”

The first network had activity originating from China and focusing on the Philippines, Southeast Asia and the US and was taken down for violating the policy against foreign or government interference. This network consisted of 155 Facebook accounts, 11 pages and 9 groups and 6 Instagram accounts. As many as 133,000 accounts followed one or more of these Pages, around 61,000 people joined one or more of these Groups, and about 150 accounts followed one or more of these Instagram accounts. They took steps to conceal their identity such as using VPNs, while some have been previously removed for inauthentic behavior and spam.

“In Southeast Asia where this network focused most of its activity, they posted in Chinese, Filipino and English about global news and current events including Beijing’s interests in the South China Sea; Hong Kong; content supportive of President Rodrigo Duterte and Sarah Duterte’s potential run in the 2022 Presidential election; criticism of Rappler, an independent news organization in the Philippines; issues relevant to the overseas Filipino workers; and praise and some criticism of China,” the report said.

One of the screenshots the report shared of these accounts in this network is a Facebook page with the name “Solid Sara Z Duterte 2022.”

The other network coming with activity originating from the Philippines and focused on domestic audiences consisted of 57 Facebook accounts, 31 Pages and 20 Instagram accounts that were removed for violating the social media platform’s policy on government interference. About 276,000 accounts followed one or more of these Pages and about 5,500 people followed one of more of these Instagram accounts. The network also spent $1,100 (around P53,000) for ads in the platform.

The report found that the operation of this network appeared to have accelerated between 2019 and 2020.

“They posted in Filipino and English about local news and events including domestic politics, military activities against terrorism, pending anti-terrorism bill, criticism of communism, youth activists and opposition, the Communist Party of the Philippines (CPP) and its military wing the New People’s Army, and the National Democratic Front of the Philippines,” said the report.

Facebook’s investigation on this network led them to uncover this network’s link to the Philippine military and police, despite attempting to conceal identities and use fake accounts to evade enforcement of Facebook policies.

The report withheld the identities of the pages it sampled from this network. One post showed red-tagging of youth organizations in Bulacan, as well as universities in Central Luzon. Another post made fun of Kabataan Partylist Rep. Sarah Elago as a novel coronavirus, obvious despite the image being blurred by Facebook.

This is not the first time a network of pro-Duterte fake accounts were taken down by Facebbok for coordinated inauthentic behavior. In March 2019, Facebook revealed that over 200 Facebook accounts belonging to a network managed by Nic Gabunada were taken down. Gabunada was Duterte’s social media strategist during the 2016 presidential elections, worked for Duterte’s predecessor Benigno Aquino III and also for media giant ABS-CBN.

Just last June 9, Karapatan sent a letter to Facebook and the Commission on Human Rights “to urge them to launch a probe over the cases of online red-tagging in the country amid the controversy over reported cases of duplicate dummy Facebook accounts of activists as well as online individuals expressing views critical of the government, raising alarm on the serious implications and digital security threats of these accounts and red-tagging in the platform.”

The CPP Information Bureau responded to the removal of Facebook accounts linked to police and military and sharing pro-Duterte messages and vilification of his critics, as confirmation that “Duterte’s claims to popular support is all a big hoax.”

“It is now becoming exposed that the so-called Duterte Diehard Supporters is a manufactured trend generated by a state-funded troll-farm of hundreds of networked government-controlled Facebook and other social media accounts. These are maintained by a highly compensated copy-and-paste brigade. Its operations is being masterminded and bankrolled by the National Task Force to End Local Communist Armed Conflict (NTF-ELCAC). No less than the account of the chief of the Philippine Army’s “Social Media Center” Andre Cabales was determined to be among those behind this fascist social media manipulation,” said the group.

While this is a welcome development, they commented that hundreds or thousands more similar accounts are run by state agents, and accounts of military and police agencies are themselves troll accounts which work hand in hand with Malacañang’s communication office and are in fact instigators of fascist propaganda and psywar operations.

The police and military disowned the accounts.

Newly-appointed Philippine National Police (PNP) chief Gen. Camilo Cascolan said all official Facebook pages of the PNP and its units “remain compliant with standards and continue to serve its purpose along these objectives.” He also told “The Chiefs” on One News/TV5 on Sept. 23 that the PNP is launching an investigation on the issue raised by Facebook, but that the law enforcement agency “respect(s) the administrative action taken by Facebook on what they perceive to be violations of its terms of use.”

AFP chief of staff Gen. Gilbert Gapay said Facebook’s action “prompted us to review the personal accounts of our personnel and remind them of the policies and the etiquette, do’s and dont’s of what to post on social media.”

Military spokesperson Maj. Gen. Edgard Arevalo said all the social media accounts of the military were still “up and running,” and none had been shut down by Facebook.