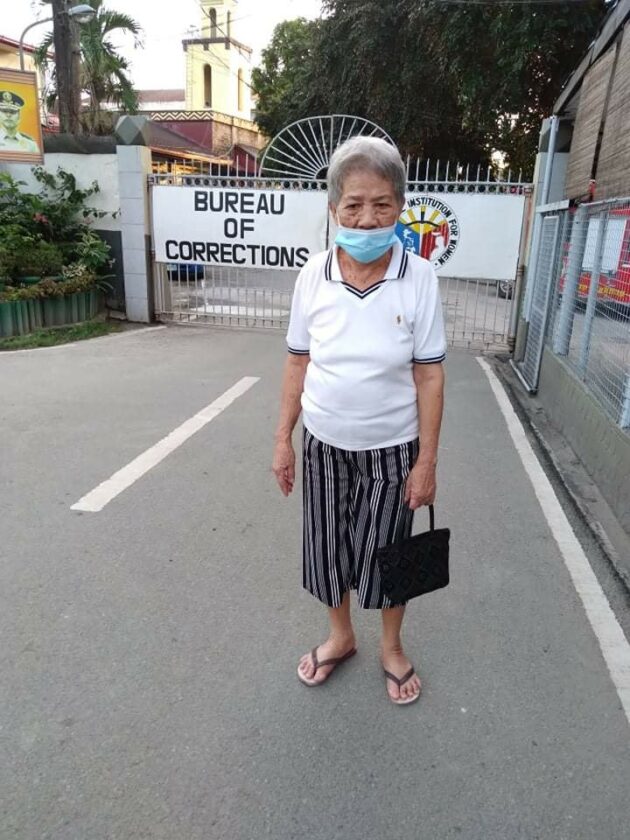 Morita Alegre, 75, a political prisoner who was imprisoned for 16 years with her son husband Jesus Alegre, walked free on January 28.

Alegre, together with her late husband and son, was arrested on April 14, 2005, for allegedly killing a certain Rogelio Tipon, the bodyguard of local landowner Avelino Gaspar, with whom the Alegres have a long-standing land dispute. Morita was transferred to the Correctional Institute for Women in Mandaluyong, while her son and husband were imprisoned in the National Bilibid Prison in Muntinlupa. Jesus died on June 14, 2021, while serving time in prison.

In a statement, political prisoners’ kin group Kapatid said that Alegre was granted a commutation of sentence on Good Conduct Time Allowance on December 24, 2021. She had also overserved her maximum sentence of 10 years, having been jailed for 3,676 days.

“Today, there is nothing more Nanay Morita wants to do than to return home. And home is their coastal barangay in Sagay, Negros Occidental. First thing she will do, she says, is visit the grave of Jesus at the public cemetery. Last time she saw Jesus was during his wake at the PIC Cathedral in Taft Ave. in June 2021 when Kapatid petitioned the DOJ to allow her to see him before his body was flown to their hometown for burial,” Kapatid said in its statement.

Morita and her son Selman, 47, were given furlough by the Department of Justice (DOJ) to visit Jesus at his wake before his remains were brought in Negros Occidental, where he laid to rest.

Morita’s husband, Jesus, passed away last year in June due to multiple complications caused by kidney failure. He also had Chronic Obstructive Pulmonary Disease and diabetes mellitus, which made him vulnerable to COVID-19 infection.

Jesus and Morita have been suffering from arthritis and hypertension since their incarceration.  Various groups like Kapatid have sought their release on humanitarian grounds due to their deteriorating health inside the overly-congested, dilapidated and underfunded Philippine jails, especially during the pandemic—yet these were not granted.

Kapatid added that Morita is seeking support for Selman, who is currently detained at the New Bilibid Prison in Muntinlupa City. The group also requested donations to help Morita return to their hometown in Sagay, Negros Occidental.