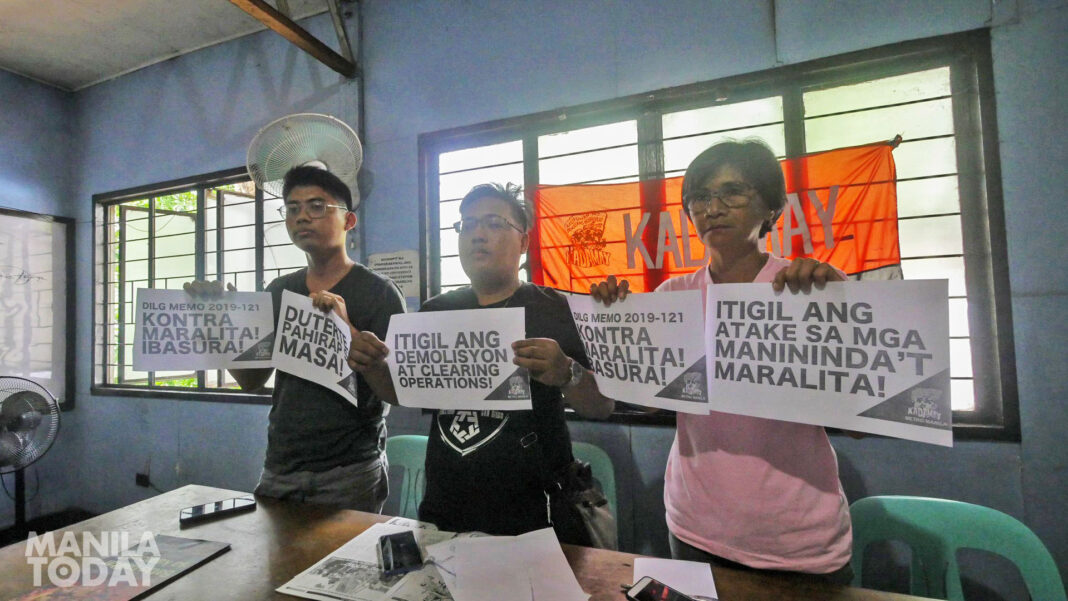 KADAMAY Metro Manila declared the said clearing operations as nothing but a “failure” as it did not address the issues of livelihood and homelessness of poor Filipino families, but rather worsened their long drawn poverty-stricken conditions.

Maristel Garcia, Kadamay Metro Manila spokesperson, said that the memorandum is used not just for the road clearing operations but also the basis to legitimize demolition of urban poor homes in different areas of Metro Manila.

[The affected poor Filipinos who lost their houses and who are being displaces, whose livelihood are taken away from them will still be united to defend their houses for they see it as their last protection.]

Representatives from Brgy. Pasong Tamo and Samahan ng Magkapitbahay ng Obrero, Brgy. Bagumbayan, Quezon City attended the press conference to denounce the ‘illegal demolition’ of their homes in their communities.

[It’s easy for the government to say that we should leave our houses, but on our end, it’s very hard, we’ve lived here for years but they will drive us away from our home like animals or garbage.]

Higuit also pointed out that the government is prioritizing foreign businesses and structures over Filipinos on urban spaces.

[They did not present any documents and if we asked where we will transfer, they will just say that we should take care of our own lives.]

Caballero also cited that the 60-day simultaneous clearing operations affected not just their houses but also their livelihood.

Today is the deadline of the Department of Interior and Local Government (DILG) Memorandum Circular No. 2019-121 that orders local government units (LGUs) to clear public roads within 60 days. The memo was issued last July 29, following President Rodrigo Duterte’s directive in his 4th State of the Nation Address (SONA).

“If there is a mayor or a governor, or kung ano kang — sino kang demonyo ka, i-suspend mo Sir Año. Give him time and if he cannot — if he is not up to it, then pagpahingain mo na lang. Suspend mo na. Wala talagang — wala tayong magawa,” the president said in his SONA.

[If there is a mayor or a government, or whatever — whoever devil you are, suspend them, Sir Año. Give him time and if he cannot — if he is not up to it, then let him rest. Suspend them. There’s nothing — there’s nothing we can do.]

After today’s deadline, the group has been told that the LGUs will pass on the responsibility of continuing clearing operations to the barangay captains until the next deadline of October 5 at the village council level.

The DILG warned in its memo that those who will not comply with the directive may face appropriate administrative cases pursuant to section 60 (c) of the Local Government Code of 1991 and other existing laws and policies.

Non-compliant LGUs will be issued show cause orders to explain their side to DILG Secretary Eduardo Año. Their names would then be submitted to Duterte, DILG spokesperson Undersecretary Jonathan Malaya said yesterday, a day before the deadline.