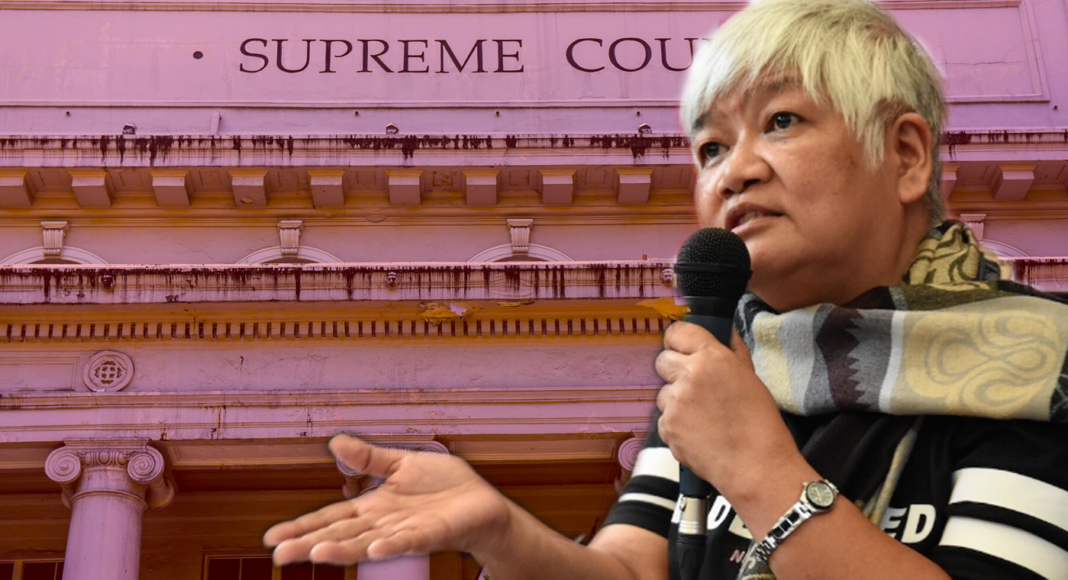 Margarita Valle, Davao Today columnist, said she will go to the Supreme Court and fight “until the end” to seek justice against her illegal arrest and detention in 2019. The journalist and her legal counsels announced that the Office of the Ombudsman dismissed the motion for reconsideration filed on November 3, 2020 to hold her perpetrators accountable.

“Big bullies that they are, we just cannot allow this transgression to continue without a fight,” said Valle.

Valle with her legal counsels from the National Union of Peoples’ Lawyers (NUPL) and officers from the National Union of Journalists of the Philippines (NUJP) and International Association of Women in Radio and Television (IAWRT) Philippines chapter, the groups expressed their disbelief with the Ombudsman’s decision. Inasmuch as they hoped for a different outcome, the groups found it unacceptable how the perpetrators got away with a slap on the wrist.

In a decision dated June 24, 2021 but received by Valle only a few days ago, the Ombudsman said that there is no newly discovered evidence added to materially affect the outcome of the case or no proof that grave errors of facts or laws, or serious irregularities were committed by its office.

Over the last two years since her arrest, Valle had sought for justice but has yet to succeed.

On August 10 last year, the Ombudsman dismissed the criminal charges filed by Valle in 2019 against 17 police and military officials and other suspects on the basis that she was not able to establish probable cause to charge them with arbitrary detention, kidnapping, serious illegal detention, violations of Anti-Torture Act of 2009 and the rights of persons detained.

The Ombudsman also dismissed the administrative charges Valle filed against 15 of the 17, holding liable only two officers for grave abuse misconduct and grave abuse of authority and ordering three months suspension without pay for “simple neglect of duty.” The two are then-Regional Commander of the Criminal Investigation and Detection Group (CIDG) in Zamboanga Peninsula Colonel Tom Tuzon and OIC of CIDG in Zamboanga Del Sur Madzie-Aziz Mukaram. Tuzon and Mukaram appealed their suspension without pay, but this was denied by the Ombudsman.

According to Atty. Katherine Panguban of NUPL, the Ombudsman dismissed the case because of failure to produce enough evidence to overturn their presumptions. The administrative charges were also dismissed and only two officials were sentenced but with only a small liability, as the Ombudsman sees no bad faith in the arrest and detention of Valle.

Valle was arrested by Zamboanga Del Sur cops and CIDG operatives, together with the presence of the soldiers from 102nd Brigade and 53rd Infantry Battalion, at the Laguindingan Airport in Misamis Oriental at around 10am on June 9, 2019. She was then brought to Pagadian City on the basis of warrants served for Elsa Renton and the alias Tina Maglaya for multiple murder, frustrated murder, damage to property with no bail recommended issued in 2011 and for arson with bail at P24,000 issued in 2006. Valle said her name was added on the warrants and her mug shots and fingerprints were taken in Iligan City. She was held incommunicado for hours and her phones were taken from her.

[The PNP and the Philippine Army insisted that Ging Valle and Elsa Renton, an allegedly high ranking NPA official in Mindanao is one and the same.]

This was even after Valle established her identity and showed documents to prove her identity and work as a journalist based in Mindanao. Later on, the officials said that they falsely accused Valle and that it was just a case of mistaken identity.

But the trauma of Valle’s 13-hour ordeal lasts up to this day. Valle shared how she had sought professional and spiritual help to address her trauma. The lies and maneuverings of the police and military kept coming back to her. Valle also shared how she has found it hard to go back to writing since then and has only managed to do ‘mundane tasks’ such as household chores.

Calls for justice and accountability

Following the Ombudsman’s decision to junk Valle’s case, calls for justice and accountability resurfaced. Groups and netizens noted how hard it seemed to get justice for victims of human rights violations, whether dead or alive. Calls for justice for other journalists who were targeted by the current administration also resurfaced, such as the case of Manila Today editor Lady Ann Salem who was freed on March 5 and of Eastern Vista editor-in-chief Frenchie Mae Cumpio, who was arrested in February 2020 and is still in jail.

Reducing Valle’s plight as a mere simple neglect of duty is unacceptable to the attack made against Valle and her profession, said IAWRT Philippines President Lynda Garcia.

“That the Office of the Ombudsman said that the arrest was legal and the officers honestly believed that she was the Elsa Renton that they were looking for is also worrying. In its initial decision, sabi nung Office of the Ombudsman, yung [the] ‘blurry’ photograph daw in some way has some resemblance in the physical characteristics of the complaint. Na pareho daw silang elderly at have short white hair. Ah yun na yung basis? [That they are both elderly and have short white hair. That is the basis?],” said NUJP Chairperson Jonathan de Santos.

“Sinabi ng Commission on Human Rights [said] at the time when fundamental rights are at stake, only the highest standards must be observed for the consequences could be irreversible,” he said.

Valle is Chair of the NUJP Davao Chapter and Vice President of IAWRT Philippines.

Mistaken identity is not a simple case of neglect of duty and has never been a lawful reason to arrest and detain a person, insisted Panguban.

Panguban said they will file with the Supreme Court a petition for certiorari for grave abuse of discretion on the part of the Ombusdman, challenging its decision to dismiss the charges and deny the motion for reconsideration. In addition, Valle’s camp will also mention the red-tagging she experienced at the hands of the police and military.