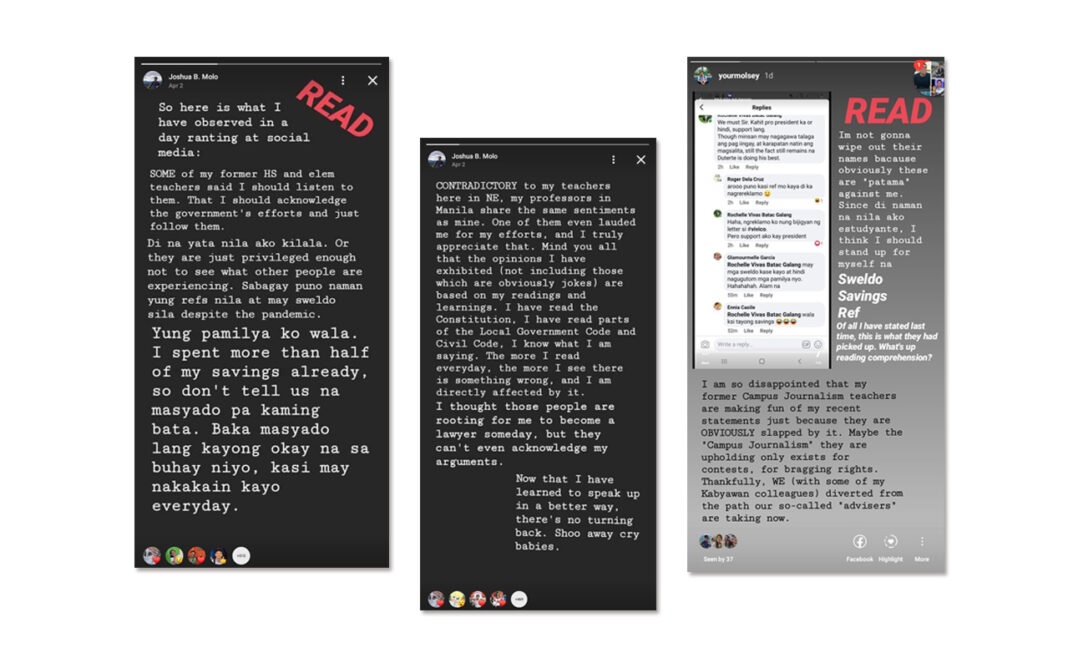 Joshua Molo was summoned by barangay officials in San Fernando Sur, Cabiao, Nueva Ecija on April 5 to publicly apologize after a heated exchange online with his former teachers.

The complaint stemmed from Molo’s exchange of online comments with three of his former high school teachers.

Molo is the Editor-In-Chief of the UE Dawn, the official student publication of the University of the East (UE).

Molo, through his Facebook account, has criticized the government’s response to the COVID-19 outbreak, which earned various comments from those who agreed and disagreed with him.

On April 2, he shared in his Instagram story his reaction to his high school and elementary teachers who told him to listen to them and “acknowledge the government’s efforts and just follow them.”

“‘Di na yata nila ako kilala. or they are just privileged enough not see what other people are experiencing. Sabagay puno naman yung refs nila at may sweldo despite the pandemic,” Molo said on his story.

Later on, he posted another story saying his former high school teachers were making fun of what he posted.

He said, “I’m not gonna wipe out their names because obviously, these are “patama” against me. Since ‘di naman nila ako estudyante, I think I should stand up for myself na.”

At the mediation meeting at the barangay, he was informed of the complaint filed against him and that the “offended” teachers are willing to pursue a cyber-libel case against him.

His former teachers along with the backup of the Philippine National Police (PNP) Cyber Crime Division opened his FB account and he reported then to have been red-tagged.

According to Molo, his mom who was also a barangay official there pleaded his case. The teacher threatened to file a cyber libel case against Molo unless he hands over a public apology.

In addition to that, he was also threatened to be picked up by police if he published any statements critical of the government.

From that point, Molo figured he would simply post a public apology statement. However, later on, he was compelled to shoot a video of his apology before he is allowed to return home.

The UE Dawn condemned the actions taken against their Editor-in-Chief.

“Preventing someone from expressing his or her opinion on matters such as grievances against the government is an act of oppression. We, the members of the UE Dawn, strongly believe that to criticize the government is a right of every Filipino,” the publication said.

College Editors Guild of the Philippines NCR condemned the red-tagging and arrest of Molo.

“In the course of our struggle regarding free speech and expression, this affront is not new. Vilification efforts made upon silencing those who voice their dissent and opposition against the autocratic ruling of Duterte administration, we will continue this fight. Collectively, we will persevere,” said the campus publications alliance.

National Union of Students of the Philippines NCR referred Molo’s case to human rights alliance Karapatan after Red Wire broke the story this afternoon. The post has been shared more than 3,000 times.

“We are alarmed on this incident as it is a case of curtailment of the right to free expression. Karapatan would like to remind authorities that the right to free speech is protected by the Philippine Constitution and international human rights instruments. Anyone who wishes to express dismay over government’s actions should never be threatened and penalized,” said Karapatan.

Many sympathized with Molo and #DefendPressFreedom became a trending topic on Twitter.

The teacher has asked Molo to take the apology video down.

Molo’s case is not the first recorded track against freedom of speech and press freedom this time of the pandemic.

Last March 25, Today’s Carolinian (TC), the official student publication of the University of San Carlos condemned in an editorial on Facebook “A GOVERNOR IS NOT ABOVE THE CONSTITUTION” the alleged intimidation of the governor against critics.