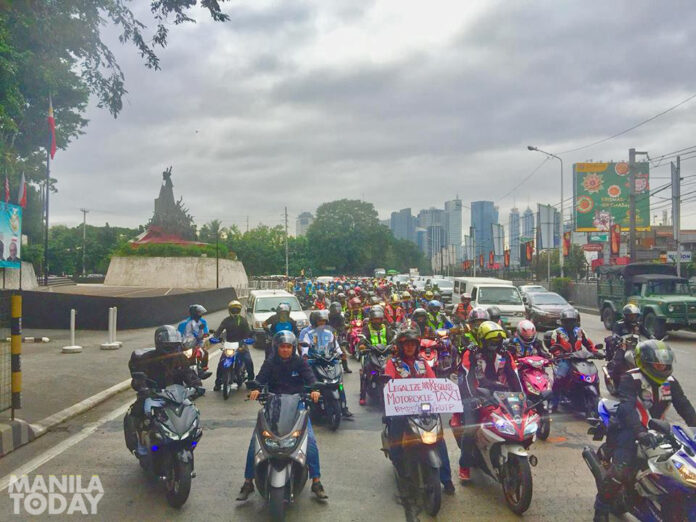 More than a thousand motorcycle riders and transport-hailing app Angkas bikers gathered at the People Power Monument for a ‘Unity Ride’ along EDSA today as part of the nationwide protest against the repression of their livelihood and the provision on the Congress-approved “Motorcycle Crime Prevention Act” on double plates for motorcycle. The said act was authored by Senator Dick Gordon.

The ‘Unity Ride’ route started in White Plains in Quezon City towards Quezon Avenue and went back to the People Power Monument. During the motorcade, riders blew their horns and created noise to amplify their demands.

On Wednesday, the Supreme Court (SC) released a temporary restraining order (TRO) prohibiting more than 25,000 Angkas bikers from operating transport services. Led by the Riders of the Philippines (ROTP) and the Motorcycle Rights Organization (MRO), the protest motorcade served as an indignation to the SC decision, which they said removed the source of income of thousands of Angkas riders.

In an interview, Don Pangan of ROTP said, “Angkas bikers are pool of jobless Filipinos who initiated to find a way to earn for a living. They were already victims of the government’s failure to provide decent jobs for them and yet their livelihood were being victimized again.”

He added, “Instead of preventing Angkas from operating, the government must legalize and regulate this. Instead of seeing it as a problem, our national leaders must appreciate that Angkas is an alternative solution to worsening problem of public mass transport system in the country.”

Pangan suggested for the government to ensure proper training and education to all Angkas applicants in order to assure the safety of the bikers and all our riding public and not criminalize them.

Angkas, on the other hand, assured their riders that they will continue to fight for them and announced that they will be holding a concert next week in Quezon City as part of their series of activities on the issue.

Pro-labor group Defend Job Philippines expressed support and stands with the ROTP and to the almost 25,000 Angkas bikers, their families and their fellow motorcycle riders in their just demand in defending their right to decent livelihood, especially in time for the Christmas season.

In a statement, the group said, “We call on the Duterte government and the SC to lift its temporary restraining order (TRO) against Angkas, which in effect suppresses the source of income of thousands of bikers of the motorcycle ride-hailing application.”

They continued, “The lifting of the TRO would also help out the thousands of Angkas commuters, majority are workers, who depend on the app service for their faster means of transportation.”

The group vowed to join ROTP, MRO and other motorcycle groups in their series of activities opposing the SC TRO and the double plate scheme for motorcycles in the coming days.

Meanwhile, the ROTP and MRO slammed the passage of Gordon’s ‘Motorcycle Crime Prevention Act,’ particularly the provision on the double plates which was proposed to be placed in front and back of motorcycles.

While they support the effort of the government to resolve crimes, the groups said that the bill seems to be barking on the wrong tree as the issue of motorcycle plates seems to criminalize motorcycle riders.

Pangan insisted, “If the government really wants to prevent crimes and criminals riding motorcycles, it must not pass on the burden to the riders but rather on the systemic issues of law enforcement in the country. Crime prevention must not step on the rights of our riders.”

They added that double plates on motorcycles will be unsafe for riders. According to then, even manufacturers of plates agree that putting plates in front of motorcycle will be prone for accident.

Riders also sees no problem with bigger and more readable plate numbers as long as this will only be placed at the back of their vehicles. They even criticized the ‘doble-plaka’ scheme amid delays and failures of the Land Transportation Office to release plate numbers on time.