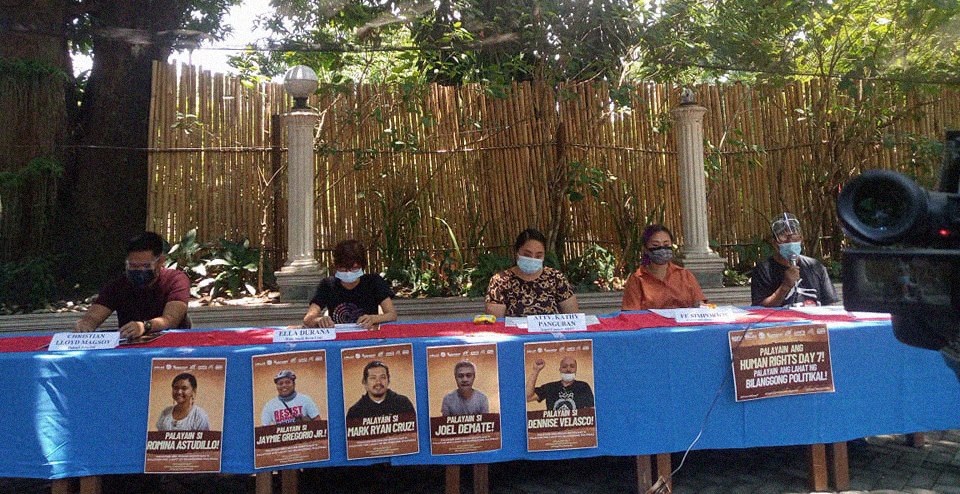 Their families and human rights defenders deemed such absurd decision made by Manila and Quezon City courts upon denying the omnibus motions while recounting on the earlier court ruling in Mandaluyong City.

It must be noted that the Mandaluyong court which also handled the case of HRD7, specifically with Manila Today editor Lady Ann Salem and trade unionist Rodrigo Esparago, had found numerous material inconsistencies that led to the quashal of search warrant and ultimately dismissing the case.

Given this case victory in Mandaluyong court, the decision made by the Manila and Quezon City courts is deemed questionable as though the issued search warrants for the HRD7 are on the premise of the same set of facts and alleged circumstances.

Atty. Panguban even considered that the controversial Executive Judge Cecilyn Burgos-Villavert’s issued warrants a “general warrant” for failure to particularly describe the items to be seized; however, both courts dismissed these arguments and said that the things to be seized need to be described in terms of brand and model.

Human rights defenders further chided the reason behind the junked omnibus motions laid by Manila Judge Bibiano Colasito and QC Judge Kathleen Dela Cruz-Espinosa that the findings Villavert has to be respected or given the benefit of the presumption of regularity, and that the HRD7 camp should then go for trial proceedings in order to contest such rights violations upon the implementation of the said questionable warrants.

According to Karapatan Metro Manila, Demate’s legal counsel had filed a motion to quash the warrant and suppress the evidences on February 22. This was denied on April 22, exactly two months since the Demate and Velasco’s camp filed the motion. A motion for reconsideration was then filed on May 2 but was again denied five days later.

On the other hand, Cruz, Gregorio, and Astdillo’s legal counsel had filed the same motion on March 22 but was denied on May 2. Similarly, a motion for reconsideration was filed on May 10.

“It is absurd that the Mandaluyong court saw the inconsistencies and defects of the narratives and evicence provided by thr police in arresting Esparago and Salem; but the same set of facts were ignored by QC and Manila courts,” said Karapatan Metro Manila in a statement.

The human rights group urged that there is no basis in prolonging the detention of the labor activists, affirming that this case is clearly politically-motivated which aimed to silence critics of the Duterte government.

“We are urging the Supreme Court to take notice of the continuing injustice resulting from the weaponization of judicial processes by the Duterte government in waging a crackdown on activists and opposition forces. The SC should immediately enact reforms so that the modus operandi of the police and their accomplices, which relies on factory of search warrants, will not be used again,” Karapatan Metro Manila concluded.