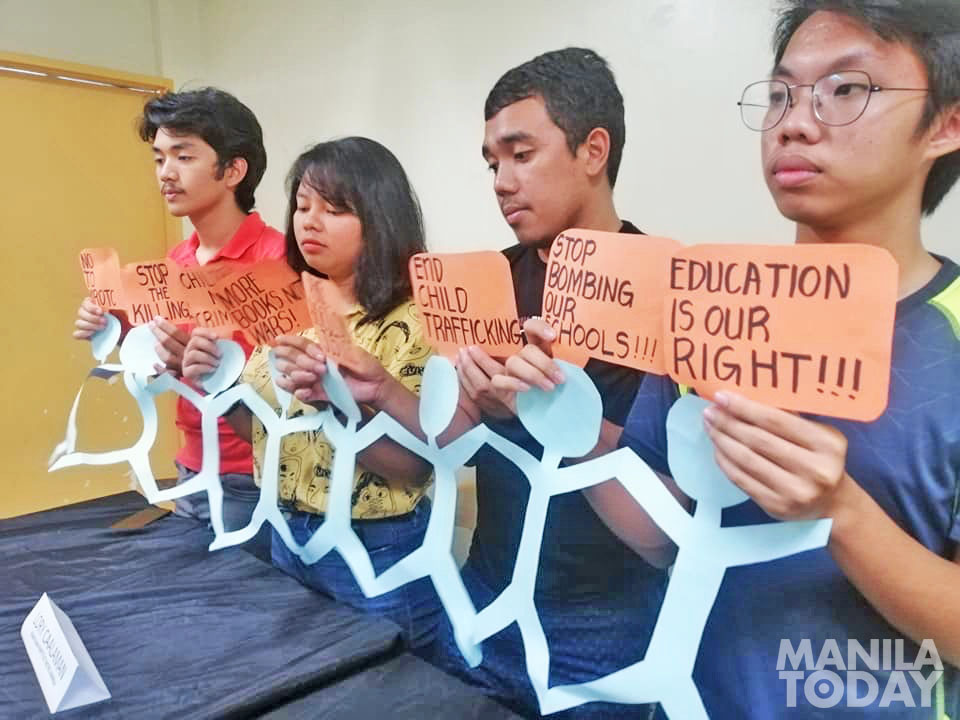 On the 30th anniversary of the United Nations (UN) Convention on the Rights of the Child (CRC), Youth for Justice and Peace Network (Y4JP) said that the drug war and other proposed measures by President Rodrigo Duterte’s administration run counter to the country’s ratification of the treaty.

“The government’s so-called war on drugs, Congress’ push for the revival of mandatory ROTC and lowering the minimum age of criminal responsibility, and red-tagging progressive youth organizations are anti-child policies. All these go against the UN Convention on the Rights of the Child, which the Philippines agreed to adhere to in 1989,” Y4JP convener Paco Royan Perez said.

They said that the justification is absurd, since “Duterte himself cannot evoke the spirit of nationalism by maintaining a timid if not submissive stance on our territorial and economic integrity on the issue of the West Philippine Sea.”

Some children and youth groups and even government officials have also criticized the proposal for mandatory ROTC for senior high school students as violation of the Optional Protocol to the UN CRC, to which the Philippines is a signatory.

The protocol mandates that minors, or those under 18 years old, should not be “compulsorily recruited into the armed forces.”

Mandatory ROTC is also said to violate Republic Act (RA) 11188, or the Special Protection for Children in Situations of Armed Conflict Act. The law declared children as “zones of peace,” and would be treated in accordance with what is stipulated in RA 7610.

Under RA 7610, or the Special Protection of Children Against Abuse, Exploitation and Discrimination Act, children “shall not be the object of the attack and shall be entitled to special respect.

The group also said that it is also absurd for Duterte, military officials and former military and police officials now in Senate to say that the ROTC program will teach students values, when “Duterte and the Armed Forces of the Philippines violates human rights and undermines democratic rights in its red-tagging, vilification of progressive groups and even independent media.”

Perez said, “The attacks on activists have become so brazen that the police and military do not heed the lasting trauma and negative effects on children.”

He said this of the arrest of Gabriela Metro Manila leader Cora Agovida and her husband Michael Bartolome on October 31 in their Paco, Manila home, in front of their 10-year old and two-year old children. Police barged in their homes and guns were pointed even at the children who at that time did not understand the situation. Only after they were separated from their parents that the 10-year old boy had asked whether his parents were already dead. The two-year old, still breastfeeding, was separated from his mother for 24 hours. Children’s groups assisting the arrested couple lobbied to take custody of the children but took more than a day before it was granted. The couple has been charged for illegal possession of firearms and explosives, which they insist were planted similar to the arrests of more than 50 activists in Negros on the same night.

Several activist youth groups such as Anakbayan and Kabataan Partylist have also been accused of brainwashing and kidnapping minors in the Senate committee hearing led by former Philippine National Police (PNP) Chief and first chief operator of the president’s drug war, Senator Ronald ‘Bato’ Dela Rosa. Some have also been charged for the alleged kidnapping of activist Alicia Lucena, who has already surfaced and denied she was missing, kidnapped and brainwashed.

Kabataan Partylist Metro Manila Vice President Lorevie Caalaman, also claimed to be missing, kidnapped and brainwashed, said the PNP is using this as a ruse to justify their entry into schools and universities.

Caalaman said that the attacks on children and youth’s right to organize, right to be heard, right to protest have been systematically attacked by the government.

“This government does not wish for the children and youth to become socially aware that’s why in the words of DILG Sec Año, mandatory ROTC is so that the young ones don’t get recruited to activist groups. At the same time, they’d like to be able to charge as criminals those who come into conflict with the law but are as young as 12, while some even proposed 9 or the Grade 3 level student. Maybe this measure is designed and may be used against children and youth they cannot purportedly discipline through ROTC and their other repressive measures,” said Caalaman.

Legislators approved House Bill 8858, lowering the minimum age of criminal responsibility from 15 to 12 on 3rd and final reading in January this year but was not passed into law before the 17th Congress adjourned. The House justice committee of the Lower House recently approved the bill, and will be presented for plenary amendments and debate during second reading.

Perez lamented, “On top of all this, the president’s drug war has victimized thousands of youth, many of them made orphans as the death toll rose to 27,000 killed in police operations, in vigilante-style shootings. At least 54 minors were killed as collateral damage and even as targets like in the cases of Kian, Reynaldo, Carl, Tisoy and many others.”

The United Nations Convention on the Rights of the Child, of which the Philippines is signatory, was adopted in the UN General Assembly on November 20, 1989. It became the most widely ratified international human rights treaty in history. Currently, 196 countries are party to it, including all members of the United Nations except the United States.

The convention sets out the civil, political, economic, social, health and cultural rights of children and defines a child as any human being under the age of eighteen, unless national legislation indicates otherwise.