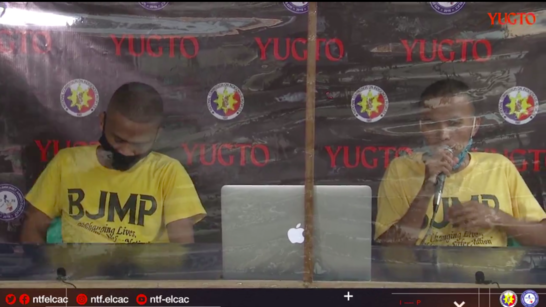 In a nine-page decision, an Olongapo court ruled the arrest of two Aeta tribesmen as “blatantly inconsistent and unlawful.” This was the first known case using the much-protested Anti-Terrorism Act of 2020. Human rights groups also label the two as the first victims of the ‘terror law.’

Dated July 15, Olongapo Regional Trial Court (RTC) Branch 97 through Judge Melai Fay Tadili ordered to dismiss the terrorism charges against Japer Gurung and Junior Ramos as the prosecution “failed to discharge the burden of proving the identities of accused as perpetrators of the crime.”

Gurung, 30, and Ramos, 19, were farmers in San Marcelino town in Zambales province.

The two Aetas were initially represented by the National Union of Peoples’ Lawyers in November 2020 and then replaced by government lawyers from Public Attorney’s Office (PAO) three months after.

While with the NUPL, the Aeta farmers pleaded not guilty to the allegations, accusing the military of torture while they were in custody for six days.

According to Atty. Bonifacio Cruz, one of their lawyers in NUPL, the said torture was recorded in their counter-affidavits that the National Commission on Indigenous Peoples (NCIP) prepared, detailing that they were made to endure and forced to feed on their own feces while they were in military custody. They said they were tortured into admitting they were members of the New People’s Army (NPA)—an allegation denied by the military.

Now represented by PAO through Atty. Collins Coloma, their camp filed a demurrer, which moves to dismiss the case as there were insufficient evidence presented. Coloma further noted the failure of the provincial prosecutor to establish the identities of accused Aeta farmers.

“The absence of positive identification renders the arrest of the accused and the search and seizure of the [firearms] from them doubtful,” Coloma said.

The statements of soldier-witnessess Second Lieutenants Fritz Entoma and Ian Dominic Oran of the Army’s 73rd Division Reconnaissance Company, testified before the court to seeing Gurung and Ramos during a firefight between soldiers and the NPA.

They affirmed to have recognized the Aetas from “photos shown to them during the profiling of the suspects prior to the military operation.”

However, this narrative was contradicted by the testimony of another junior officer who told the court that there are no such videos and photos shown to them upon pre-operational briefing.

“If they (Entoma and Oran) did see the accused, they could have easily said so in their sworn statements as they did in their judicial affidavits. They could have provided the accused’s distinct features, such as skin color, height, and hair type, and also their clothes’ color that would set them apart from the other armed persons. They could not have just referred [to] them as NPA members,” the court pointed.

The court also noted that the warrantless arrest on Gurung and Ramos were unlawful given the inconsistent remarks of the soldiers and the failure of the prosecution to provide sufficient evidence.

“The invalidity of an arrest leads to several consequences, one of which is any search incident to the arrest becomes invalid, thus rendering the evidence acquired constitutionally inadmissible,” the court ruled.

Decision welcomed by former counsel, even by NTF-ELCAC

NUPL president Edre Olalia welcomed the acquittal of Gurung and Ramos,  adding that it was unfortunate that Gurung and Ramos were unjustly charged with “frivolous and worse trumped-up charges.

“Their rightful acquittal is well-deserved even as they had to go through the ordeal for some time,” Olalia said.

In a joint statement released by the National Task Force to End Local Communist Armed Conflict (NTF-ELCAC) and NCIP on June 17, the two government agencies said the court’s decision is a manifestation that the justice system in the country is functioning fairly.

“The decision has clearly shown that our justice system works, hears, and decides cases fairly, without fear or favor,” the statement read.

The NTF-ELCAC has been in hot water for red-tagging activists, government critics, media groups, even ABS-CBN as it campaigned to fight for its franchise. The well-funded body created by President Rodrigo Duterte’s Executive Order No. 70 has also been tagging human rights victims, such as those illegally arrested and whose cases were later on dismissed.

Meanwhile, the Supreme Court has yet to rule on 37 petitions challenging the ‘terror law’, after it wrapped up the oral arguments on May 17.