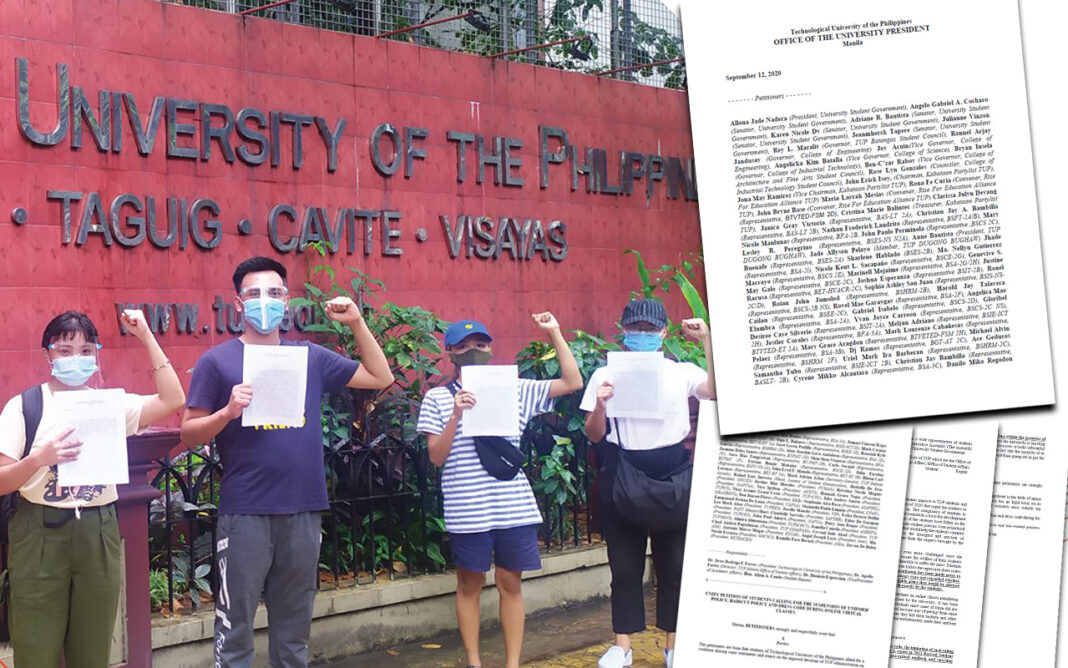 Under Memorandum 40 s. 2020 signed on September 8, the Technological University of the Philippines (TUP) Manila administration imposed several guidelines for the conduct of online classes which were met with firm objections from TUP students.

Among the policies deemed inconvenient and impractical for students to conform include wearing of prescribed uniforms, observing proper haircut, and turning on of cameras during online classes. To impose these guidelines “outside university premises” despite not being mandated in the student handbook and “without consultation” was deemed repressive by the students.

In a unity petition filed by TUP students, organization and council leaders, the petitioners echoed to debunk the said memorandum order following its “repressive” and “anti-student” measures for online classes.

“We strongly call for the administration to hear the petition of the students and do not turn a blind eye on our real situation and struggles during this pandemic,” said in a report from the university student government of TUP.

“While it is legal for the university to enforce hair and dress code, the limitation of such ruling is only within the premises of the university,” stressed by the TUP-USG.

Accordingly, as per 2011 Revised Student Handbook, sanctions against students who violated the “wearing of prescribed uniform and sporting improper haircut shall be done only when the violation transpired within the premises of the University.

Moreover, petitioners expressed their frustration as there had been no consultation prior to imposing the said memorandum order.

“Students were not consulted whether we still have budget for regular haircuts. If we have available attire that would be allowed according to dress codes, and if the school uniforms do still exactly fit the students,” emphasized by the petitioners.

Furthermore, petitioners twitted the university administration’s claim that haircutting services are allowed under the General Community Quarantine (GCQ) protocols. According to them, the formulation of the released guidelines “lacks substantial data gathering,” even with the profiling of students, majority of whom are below 21 years old and are prohibited to go outside as per COVID-19 protocols enforced by Interagency Task Force (IATF).

[Those who have mobile data only, if they used up their data after one class, how about other classes they need to attend? What about the data they need to use for homeworks and projects?]

Google Meet and Zoom are among the applications utilized by teachers and students in the conduct of online classes. Meanwhile, the cost of data consumption while using these video conferencing applications drew ire among students.

“Aren’t we supposed to prioritize ‘yong [the] length ng time and quality ng call ng [of] students?” said in a comment from the news report of Philippine Artisan, the official student publication o TUP.

According to whistleout.com[1], Zoom requires internet speeds of between 600kps and 1.8Mbps for a 1:1 to video call, in terms of both upload and download. A 720p Zoom call which will last for an hour, a 540 megabyte (MB) of data to download the video and another 540 mb uploading the video is needed for a total of 1.08 gigabyte (GB) internet consumption.

However, the above mentioned numbers increase when group video calls initiated.

[Maybe you think all students could avail of wi-fi…What about those who only use mobile data to connect, the mobile load cost is not cheap. Instead of using this for food, we need to pay for mobile data load.]