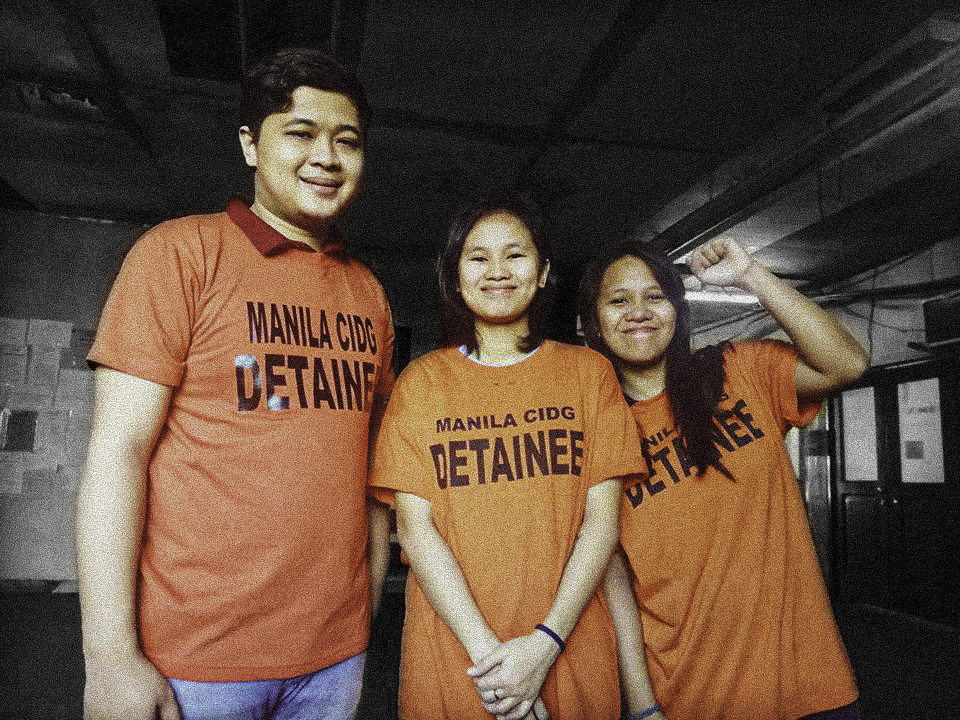 Time is a thief. Reina Mae Nasino of Kadamay Manila, Alma Moran of Manila All Workers’ Unity and Ram Carlo Bautista of BAYAN Manila, collectively known as the Tondo 3, were in jail for three years on November 5 this year.

The CA cited that Villavert’s warrants failed “to meet the standards of a valid search warrant, and all evidence procured by virtue thereof are deemed inadmissible.” The Appellate court found material inconsistencies in the address of the place subject of the search warrant and in the testimonies of the police applicant and his witnesses. Nasino was also separated from her one-month old baby, River Emmanuelle, despite appeals to the judge to keep them together after the baby was born of low birth weight and yellow skin discoloration as her mother spent almost her entire pregnancy in jail without prenatal care. River died a few weeks after the separation, only three months old.

Various groups resurfaced calls for the release of the Tondo 3.

“We ask the courts to order their prompt release. Let Reina Mae now visit the grave of her baby daughter and mourn her in peace, which was so cruelly denied her during the wake and burial of River,” said KAPATID spokesperson Fides Lim in a statement.

However, the Office of the Solicitor (OSG) filed a motion for reconsideration on September 23 asking the Court of Appeals to reverse its ruling.

Through their lawyers, the Tondo 3 filed their Comment/Opposition on October 14 against the Motion for Reconsideration that was filed by the OSG.

“Of course, we hope that they will be released since we have the CA decision in their favor,” said Atty. Kathy Panguban, Moran and Nasino’s legal counsel from the National Union of Peoples’ Lawyers.

While this was a case first handled by the OSG from the previous administration of Rodrigo Duterte and what rights groups refer as legal harassment or lawfare as part of crackdown on dissent, the current OSG continued to press on with the case.

“In our experience, the OSG does not easily let these cases go,” said Panguban.

This recent development will again take more time. The petition for certiorari that the CA decided in favor of the Tondo 3 was filed on September 24, 2020. They won the case after almost two years. Meanwhile, the trial on the main case, now with the Manila RTC Branch 47, is pending until resolution of the petition with the CA.

The Tondo 3 were arrested in a midnight police raid crackdown at the BAYAN Manila office in Tondo on November 5, 2019.

They were among 76 activists, peace consultants and human rights defenders (two of them journalists) in Manila, Quezon City, Mandaluyong and Bacolod City who were arrested and jailed based on search warrants issued by Villavert from 2019 to 2020. Out of that number, 19 remain in jail, while others are out on bail. At least six cases based on Villavert’s warrants have been dismissed on quashal of warrants or acquitted after a full trial by courts in Mandaluyong, Quezon City, Manila and Bacolod City, freeing at least 6 while others remain in jail due to other cases filed against them that their groups alleged were trumped-up. That more and more of Villavert’s warrants being quashed and cases based on them dismissed gave rise to calls to hold her accountable, to question existence of “warrant factories” and the conduct of police operations.

Following the quashal of several search warrants issued by executive judges in Manila and Quezon City and deaths in the police operations serving these warrants, notably in the December 30, 2020 raid on Tumanduk tribesmen in Capiz where 9 were killed and March 7, 2021 Bloody Sunday raids in the Southern Tagalog Region where also 9 were killed, the Supreme Court (SC) scrapped the powers of Manila and Quezon City executive judges to issue warrants outside their judicial regions. The SC also required policemen to use body-worn cameras and to allow those being served warrants to take videos and photos of the implementation of the warrant and search and seizure operations.

Various progressive and human rights groups assailed how the police operations on human rights defenders that were conducted using search warrants violated the people’s right to privacy, domicile, and that the implementers should face charges for the unjust arrest and detention of many persons. They have called on the SC to look into these cases and have also urged action against actors in these cases—judges who issued the warrants, police officers who conducted the raids, etc.

“Regarding Baby River, Reina Mae has a pending complaint against the jail officers and the [Philippine National Police]. We will also study later the possible counter charges but first let’s start with your trumped-up criminal cases against Tondo 3,” said Panguban.

But in the new administration, new warrants against activists are warrants of arrests for heinous crimes committed in places they have not been or on military encounters between the military and the New People’s Army such as the recent arrest of labor organizer Banjo Cordero, which were the usual cases used to indefinitely detain activists used by administrations before Duterte.

The Tondo 3 are in their youth. They chose to be activists to push for better lives for ordinary Filipinos, for genuine social change. As with many youth lost during Martial Law, they should have (had) more years they can contribute their strength and vitality to the nation, which is unfortunately still the road less taken.

“After all, Reina shouldn’t be in jail. She is a direct victim of an extensive attack by the state that blatantly represses and exploits the people who resist. Reina, along with Ram Carlo Bautista and Alma Moran, poured their whole lives and energy into calling for the basic rights of the poor,” said Kapatid National Capital Region in a post in remembrance of the death of Baby River on All Souls’ Day, November 2.

While the cases in court proceed, the Tondo 3 continue to languish in jail in all its inferiorities and indignities. But now, they wait for their freedom with the knowledge that the raid on their office and their arrests should not have been implemented after all.

Could the time thief here be justice itself after all?