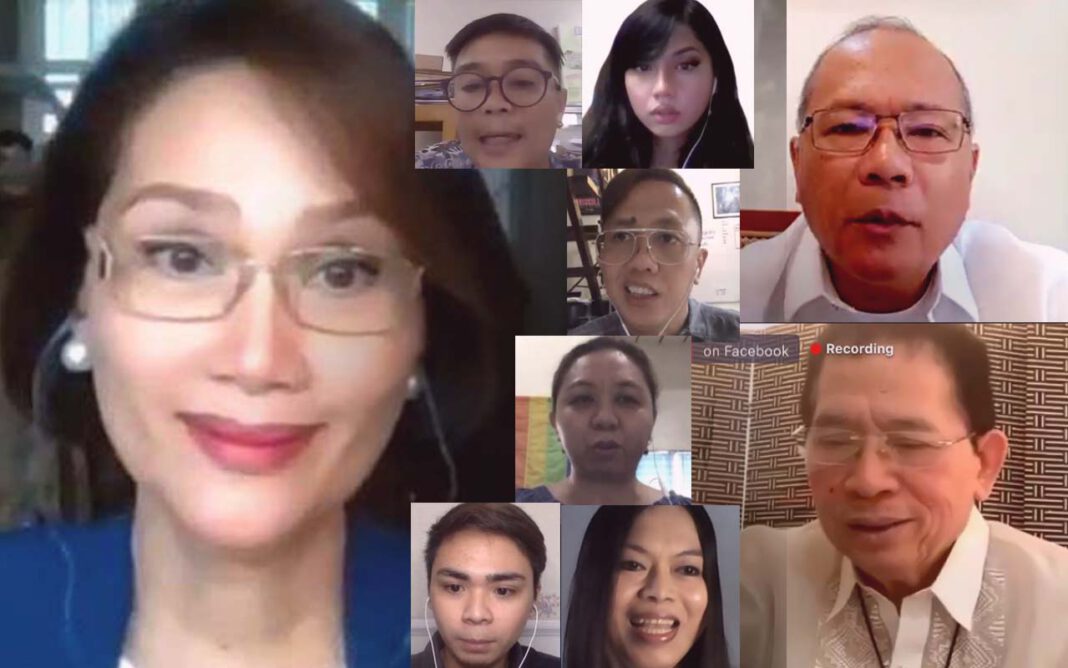 On November 4, the House Committee on Women and Gender Equality continued its deliberations on the 13 proposed SOGIE Equality bills in the chamber.

Despite the bill having been approved by the Lower House of Congress in 2017, similar issues are still being hurled against the bill during the committee deliberations.

Committee chair and Bukidnon Rep. Malou Acosta-Alba called for the passage of the bill.

Rep. Lito Atienza of Buhay Partylist said that their only objection to the bills is the inclusion of same-gender marriages, asking whether the bill will provide marriage licenses to same-sex couples. If not, the former Manila mayor said his group commits to supporting the bill as they did in the 17th Congress.

Roman is the first transgender woman legislator in Congress.

Indeed, the proposed bills did not include provisions legalizing civil union or same-sex marriage, and was even explicit in the exclusion marriage license application in the denial of licenses that may be viewed as discrimination. Same-sex marriage may need a separate proposal that would amend and update various laws in the country. As worded, Article 2 and 5 of Chapter 1 in the Family Code recognizes male or female at the age of 18 or older may contract marriage.

Roman denied that the bill is anti-family and addressed comments on social media attacking the SOGIE Equality Bill.

“As a Catholic, I am hurt… SOGIE bill is not a same sex marriage bill, not a gender recognition bill, not civil partnership…It is not an anti-family bill. The Pope clearly said that  LGBTs deserve to have families and be in families, they should not be shunned away and ostracized. That’s why he suggested civil unions,” said Roman, adding that many LGBTQIA+ Filipinos provide support to their cishet (cisgender and heterosexual) family members and that all are part of a family.

Naomi Fontanos of GANDA Filipinas, a transgender advocate group, recounted the violence experienced by Filipino trans persons such as Jennifer Laude, Donna Nierra, and Ashley Anne Reilley, among others. Transgender woman Laude was killed by US Marine Joseph Scott Pemberton who was recently pardoned by President Rodrigo Duterte.

Rey Valmores-Salinas of Bahaghari also recounted going to the wake of Madonna Nierra, a trans woman from Caloocan slain this year, asserting that “we are all Madonna” as long as the SOGIE Equality Bill is not passed.

Maros Ramos of GALANG Philippines, a feminist human rights group supporting poor members of the LGBTQI+, said discrimination and exclusion of LGBT families has worsened in the COVID-19 pandemic, noting only heterosexual couples with children have been considered as families who become eligible beneficiaries of various government aid programs.

Castillo also reported a survey conducted among 105 Filipino LGBT employees on workplace discrimination, with 25% experiencing harassment from their superiors and 33% from peers, 60% are the subject of slurs, and 40% forced to appear more heterosexual.

Sr. Mary John Mananzan, human rights activist and Benedictine missionary sister, expressed support for the bill and said religion should not be used to justify any form of discrimination.

Objections to SOGIE bill
Atty. Lyndon Cana of Coalition of the Concerned Families of the Philippines, one of two resource persons objecting to the bill, asked “What is in the bill for the straight community? Do they have identity? There is not even an attempt to protect them.”

However, proponents and supporters of the SOGIE Equality Bill have time and again said that includes the ‘straight community’ as everyone has SOGIE or their own sexual orientation and gender identity expression whether they have clearly defined or labelled it or not.

“For example, if an old man is attracted to very young children, that’s sexual orientation, pedophilia. Is that included in the fundamental human rights? How about those who are sexually attracted to the dead? Is that also included in the LGBTQ++? The proposed bill does not define a boundary or limitation as to where the concept of gender identity and sexual orientation will end,” he said.

Roman got infuriated with the suggestion that the Congress would legislate the legalization of pedophilia and necrophilia.

“There is a discrimination here in the text of the bill. That the LGBT community, while we respect them, while we love them, while we want them to be protected, they become a super special, elite class compared to the rest of the community,” Cana continued.

He cited the higher penalties for discriminatory practices in the bill, set at P250,000 to P500,000 and imprisonment for six to 12 years, as compared to slander and defamation which impose lighter fines at P20,000 and shorter imprisonment under the Revised Penal Code.

“Don’t tell me ‘I love you.’ Just call me an abomination and a sinner, and just tell me straight up that I deserve to be punished here on earth and you will make my life difficult. Let’s not be plastic,” Roman retorted.

House Deputy Speaker and CIBAC Partylist Rep. Eddie Villanueva came to Cana’s defense, saying Cana is respected leader in the Christian community and calling him a plastic and hypocrite in public is very unbecoming, stressing how the bill is not yet passed and these things are said to the likes of Cana who oppose.

“When you tell us that you love us, accept us, but you cannot recognize our right to work, to study, to receive services from the government, this for me constitutes hypocrisy. I did not call attorney Cana a hypocrite,” Roman said.

Atty. Twyla Rubin of Commission on Human Rights (CHR) reiterated that the UDHR contains provisions that protects the rights and lives of all which has been used by the United Nations to create resolutions protecting people on the basis of SOGIE.

Rivera insisted that the bill sought to create special rights for LGBTQIA+ persons as the bill of rights already protects them.

Rubin asserted that it is necessary to create enabling laws to protect marginalized communities which includes LGBTQIA+ persons. Prof. Leo Battad of the UP Gender Law and Policy Program assented, saying “the Bill of Rights is not self-executory.”

Rubin added, “There are many acts of discrimination where they are unable to access legal remedies. Ang pagkilala ng right to equality at non-discrimination ng LGBT ay hindi kakulangan at kabawasan sa ibang tao.”

Villanueva then enumerated and read Bible verses interpreted to be against “sexual immorals” and asksed “Are the LGBTQI individuals allowed to discriminate, disregard the laws of God as reflected in the Bible?”

Roman said it is not the lawmakers’ job to identify what is sin and what is not.

“Not everyone is Catholic. we need to maintain secularism and we have to focus on our job as legislators,” said Roman.

Cana also questioned if the law protects his religious beliefs on homosexuality as a sin.

“Nothing in this bill will stop you from thinking a sinner or that I am an abomination in the eyes of the Lord. But, of course, when it comes to the right to work, study, receive government services, enter public places and facilities without discrimination, that is a different matter,” Roman said.

Villanueva requested that an additional hearing be scheduled where “respectable and credible” faith-based educators and institutions are invited to speak.

A third hearing will be held by the committee.

Various medical groups, government agencies support bill
Dr. Cheng Gavino of the Department of Health expressed support for SOGIE Equality bill on behalf of the agency, attesting that the health outcomes experiences by LGBT community are poorer compared to the rest of the population. The DOH representative said the SOGIE Equality Bills are timely measures and will strengthen inclusive healthcare for Filipinos, especially in light of the recently-passed Universal Health Care Law. The DOH agreed that no person shall be denied access to medical health and services based on SOGIE.

The CHR also expressed support for the bill and stressed the importance of protecting LGBTQI individuals from violence and discrimination.

The SOGIE Equality Bill aims to protect people from discriminatory acts and penalizes those who commit acts such as:

Long road to anti-discrimination bill
The LGBTQIA+ community lamented how various iterations of the SOGIE bill have been lingering in Congress for two decades. The Lesbians and Gay Legislative Advocacy Network (Lagablab) helped craft the first version of the bill in 1998, according to UP Los Baños Babaylan.

The SOGIE or Sexual Orientation and Gender Identity Expression Equality Bill, also known as the Anti-Discrimination Bill, was approved on final reading by the previous 17th Congress of the Lower House on September 20, 2017 and was transmitted to the Senate two weeks later.

The bill hurdled the committee level in the Senate for the first time and was sent to plenary for debates.

Various senators swore to block the bill then. Sen. Joel Villanueva vowed to block the bill, citing religious freedom. Villanueva, who co-authored the SOGIE bill with. Sen. Risa Hontiveros filed in 2016, changed his stance in 2017 and in the deliberations of the bill, said it would force religious institutions to change their views on same-sex relationships and how it would grant special rights to LGBTs. His father, Jesus is Lord founder Eddie Villanueva, lobbied against the bill. Groups accused Villanueva of delaying the bill, reserved to interpellate for at least 16 session days and only appeared on the floor three times.

On September 2019, Senate President Vicente ‘Tito’ Sotto III said 15 senators are against the SOGIE Equality bill, assuring members of the Christian Coalition for Righteousness, Justice and Truth (CCRJT) led by Rep. Eddie Villanueva, who has by then been elected CIBAC Partylist representative. His group trooped to the Senate to protest against the measure and Sotto divulged the information on the 15 senators as assurance that the bill would not prosper in the Senate.

SOGIE Bill eventually failed to become law before the last Congress adjourned, so it is again being tackled by the 18th Congress on the committee level.

The House Bills (HB) filed in the House of Representatives on SOGIE are the following:

Meanwhile, bills proposing to make May 17 of every year as the “National Day against Homophobia, Biphobia, Transphobia and Phobias for Persons of Diverse SOGIE” were also consolidated by the committee.