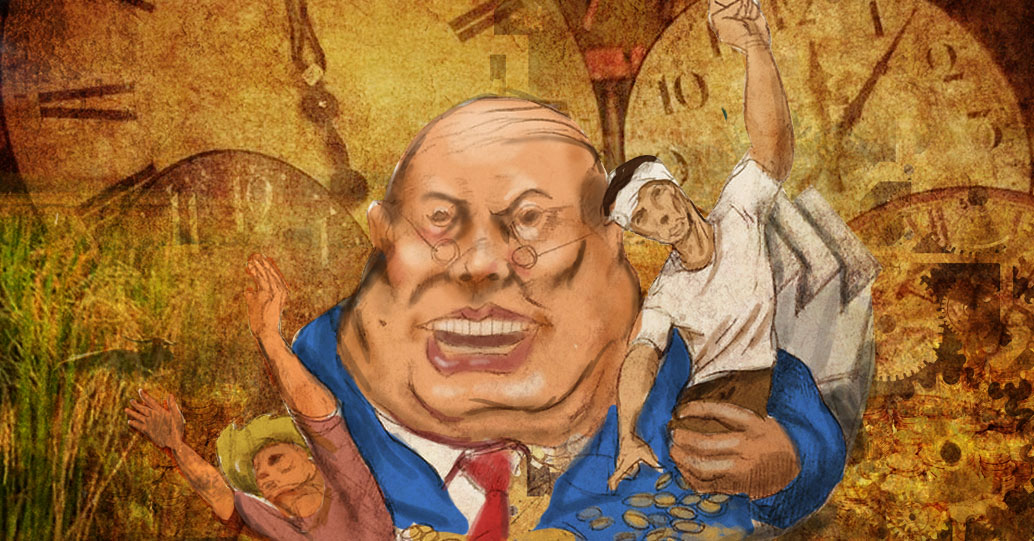 Time is an important currency.

A farmer relies on weather patterns to plan the cultivation of his land, a worker’s monthly wage is calculated through the bundy clock, and a modern day speculator accumulates virtual cash by engaging in realtime trading. Based on the preceding, many would probably assume that the digitization of everything leads to progress. The truth is that realtime processes obfuscate the massive transfer of wealth from the poor to the hoarding filthy rich. This is done not by raising productive capacities in the real economy but through instant gambling made possible by capitalist games like stock market investments. Again, based on these examples, many would probably continue to prefer realtime stealing over the backbreaking agrarian and industrial living.

And so we must discuss the real-life consequences of making money through financial wizardry: Let’s take the case of a speculator who became an overnight millionaire or billionaire. He could use the money to buy cheap lands in both rural and urban areas, turning his fake wealth into a tangible entity and even making it capable of pump-priming some parts of the local economy. But absent a long-term plan to develop an industrial base, the production of new capital is used to invade spaces that would generate quick profits. Thus the dizzying construction of condominiums which masks the housing crisis, the rise of call centers instead of manufacturing plants, and the confirmation of the ideology that raising virtual money is all that matters in life.

What the buzz over realtime innovation does not reveal is the continuing existence of labor exploitation in the real economy. That virtual transactions are not entirely wireless because real wires are required to be buried and hoisted somewhere in order to connect through the cyberspace. It is in these analog zones that capitalism as we know it solidifies the system that creates and appropriates the surplus value created by labor.

Think of peasants rendered obsolete during tiempo muerto (dead season) in the sugarcane fields, agency-hired workers in sweatshops despite the eight-hour work regulation, subcontractuals slaving to fulfill the piece-rate quota, and migrant Filipinos bound by a time-specific contract. These are real people in the real economy whose time, energy, and labor power are used not just to speed up the profiteering mechanism of turbocapitalism, but also to establish the backbone of what we call realtime transactions.

The regulation of time is indeed a disruptive act. Every device or mechanism that reorganizes and recalibrates economic relations in a specific socio-historical milieu is more than just a technological breakthrough, but also a political intervention that involves the retooling of time.

More than a century ago, the telegraph revolutionized how people communicate which boosted global commerce and conflict at the same time. Today’s telegraph is the Internet.

As the world becomes more connected and transformed into a so-called global village, transnational corporations emerge more powerful by investing in remote spaces where labor is cheap and strictly controlled. This is facilitated by developing technologies that control time and spatial dynamics.

In the 1980s and 1990s factories started to close shop as investors relocated to nearby countries in the East Asian region where minimum wage is cheaper. This is also the same period when free trade doctrine made the country more dependent on imports instead of developing its manufacturing potential.

In the current global production chain, the designated role of the Philippines is to export precious but raw materials, provide manpower needs of aging economies, and host outsourcing operations. The last item is credited for the booming service sector of the economy. It’s mainly an urban-based phenomenon which links call centers to customers from other countries, mainly the United States. Even Business Process Outsourcing centers in the provinces referred to by technocrats as next wave cities are serving the industry needs of other countries and not the rural economy.

The local urban economy is partially sustained by the spending habits of young employees and the real estate requirements of the BPO sector. Meanwhile, the market has been conditioned to absorb the rejected and redundant goods of exporting nations.

But can the Philippines develop a strong and inclusive economy through this blueprint without reviving its agricultural and industrial sectors?

Fantastic but also quite absurd that local workers are interacting with customers from other countries and facilitating consumer inquiries through realtime transactions.

Indeed, it led to faster and more efficient operations for big corporations; and short-term work opportunities for skilled workers in a semi-feudal society. But, at what cost?

The rise of an industry delinked from domestic production, the massive deployment of office-based employees in air-conditioned sweatshops, the normalization of the graveyard shift, and the validation of the neoliberal dogma which rejects the building of an industrial economy.

A million educated working population literally sleeping during the day because they work in the evening. Realtime interactions are innovative but for workers responding to overseas calls, they have to adjust their body clocks in order to function properly during the graveyard shift.

Night life is changing in the cities, stores operating all day and all night are increasing, malls are proliferating, and imports (read: smuggling) are catching up with the high demand for consumer goods courtesy of a workforce with petty cash to spare.

What is the impact of this changing lifestyle on urban politics? In the 20th century, industrial workers gather en masse after work in the afternoon or early evening to discuss politics and union building. This method of political organizing has spawned a powerful labor movement that gave it varying influence in society to demand concessions from both capitalists and politicians.

But when the anti-worker doctrine of neoliberalism rose to prominence in the 1980s, it reinforced perverse individualism in society. The mainstreaming of the Internet has made it even more challenging to consolidate the political power of the working class.

Realtime economy diffuses the strength of labor, collective actions of the multitude are idealized while undermining the legacy of the proletariat, and politicization is carried out through superficial virtual means. How can people express solidarity if realtime processes generate micro divisions in all layers of society?

Realtime appears to operate beyond the jurisdictions of politics. It is even seen as above politics and economics. The state is governed by bureaucratic procedures, red tape, and election dynamics. Non-state actors deal with these factors in calendaring their campaigns. Even the revolutionary movement is conducting predictable annual actions related to party milestones and historical occasions.

Meanwhile, realtime seems broader, free from physical and institutional restraints, available to all, and thus empowering. It’s obviously a naïve perspective because an Internet shutdown can be easily managed by the state. Cell phone jamming during religious events has clearly demonstrated this. Besides, Internet penetration remains low which is unsurprising given the poor infrastructure and obscene exclusion of the poor in society.

But beyond the technical aspect of the Internet, what realtime offers is the seductive appeal of instantaneous political engagement. Realtime is supposedly useful for citizens unable to directly participate in bureaucratic affairs but are now able to interact, albeit virtually, with agencies and some civil servants. Realtime assures public feedback and even administrative attention; a crucial outcome that traditional politics has pledged to fulfill but unable to realize. Hence, virtual communication is presented as a substantial aspect of democratic politics. Interaction among citizens, even among trolls and paid partisans, is exaggerated as a form of political struggle that mimics class-based struggles in the real world.

But political transformation is a long process. Political struggles that advance the cause of the grassroots do not produce instant solutions and overnight societal changes. Realtime amplifies public outrage but it does not capture the whole essence of political resistance. Beyond clickbaits and memes, resistance movements and revolutions demand greater commitment and sacrifice to change the present by hastening the arrival of the future. Realtime politics does not exist. An intense conversation on hyperdrive does not elevate it as the space where conflicts in the real world are waged. Politics is anchored on changing the power dynamics.

Realtime is political in the sense that it obscures the ideological battlefield by naming itself as the 21st-century arena where forces collide for dominance. Even Internet activism is a misnomer because every online initiative has to be translated into an offline intervention.

If not realtime, what then constitutes radical politics in the time of Facebook and fake news?

The NPA burning of cell phone towers is more than real, it is symbolic. It recalls the political situation during the Spanish era when church bell towers were used to signify the domain of the colonizers. Those beyond the reach of church bells were considered rebels, pagans, barbarians. The cell phone towers today are intruding into the space of the rural where Maoist revolutionaries are building Red power. This is where the urban-based capitalist machinery, which peddles realtime innovation, encounters the real revolution.